The Abandoned Lands...A Journey Through the Colorado Plateau: A Hell of a Place to Lose a Cow 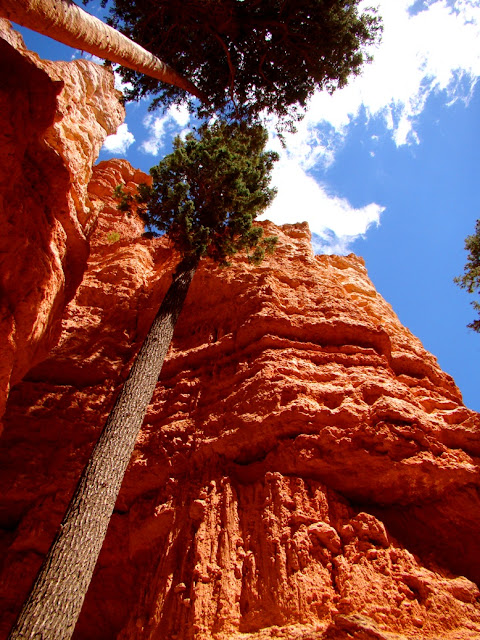 No wonder he abandoned the place...the best that Ebenezer Bryce could say about the national park that now bears his name was "It's a hell of a place to lose a cow". Ebenezer had a ranch for a few years in the 1870s in a canyon below the rim, but the region doesn't seem like much of a place to try and graze cattle. On the other hand, Bryce Canyon is one of the most unique landscapes on the planet, and was a wonderful stop during the latter part of our exploration of the Colorado Plateau. I've been calling this series "The Abandoned Lands" because the Colorado Plateau and adjacent provinces remain today one of the least populated parts of our nation, despite many efforts to settle the landscape over the centuries. The land always seems to defeat the efforts of human beings, but for geologists it is a treasure.

We had left Fremont Indian State Park and were headed south to Bryce Canyon National Park. Bryce is not really a canyon at all, but a series of horseshoe-shaped amphitheaters at the headwaters of the Paria "River", a tributary of the Colorado River system that flows south from the park (unless there is a flash flood in progress, the "river" designation is a clear exaggeration). The Sevier River drains the top of the plateau, which slopes towards the north. The pillars and spires are called hoodoos. 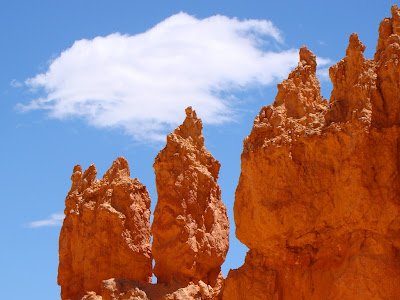 The main rock type forming the cliffs of Bryce Canyon is the freshwater limestone deposit called the Claron Formation. It accumulated in vast lakes that formed in the Colorado Plateau region in the aftermath of the Laramide Orogeny, a crustal disturbance that raised domes and mountain ranges across the American west around 50-70 million years ago. Intense weathering of the iron-bearing minerals in the sediment has produced the bright orange oxide coloring of the rock. 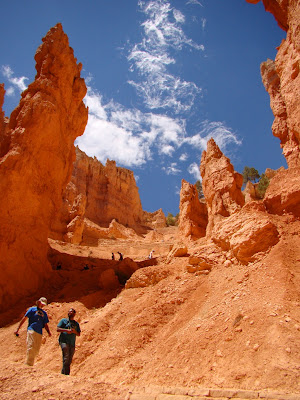 It had been a couple of years since I had been down the Navajo Loop trail through Wall Street Canyon, so that's where I headed when I gave the class a few hours of free time. The trail is not overly long at 1.3 miles, but it drops 550 feet, and every step down has to be repeated upwards on the other end of the loop. 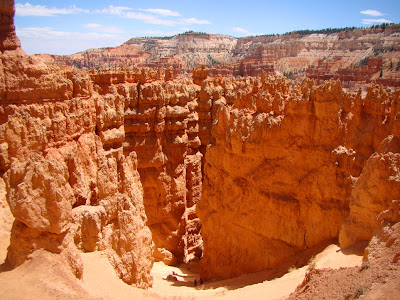 The Navajo Loop Trail is on my short list of greatest hikes in this country. There simply is no place quite like the deep cleft where the rocks seem to glow from within. The switchbacks become shorter and shorter as one approaches the slot canyon. Erosion is stunningly rapid here, around 2-4 feet per century. I've been at Bryce during intense thunderstorms, and I find these numbers reasonable. Few plants ever gain a roothold on the upper trail, and certainly not trees. 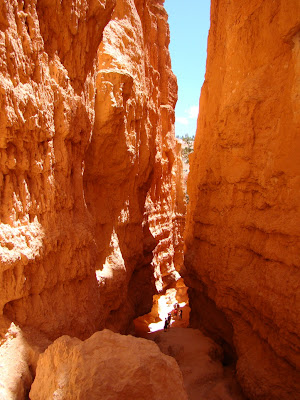 No trail can be perfectly safe, and the vertical walls and narrow slot canyons channel rockfalls right onto the trail. A serious rock fall happened in 2006, the remains of which have to be surmounted by hikers. 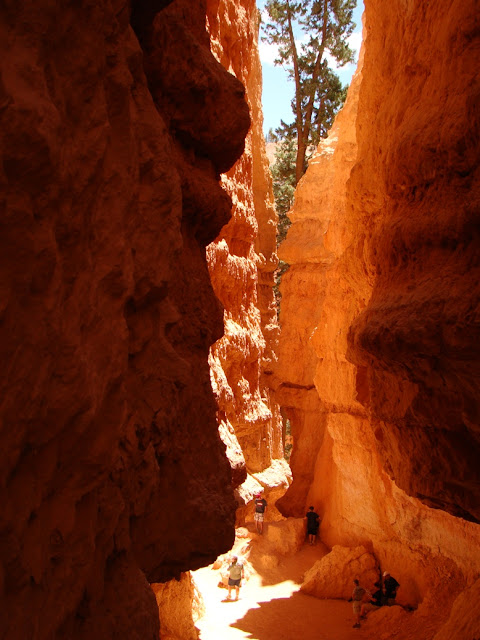 Walking through the bottom of Wall Street Canyon, the trail levels some, and a few conifers have managed to sprout and grow upwards towards the life giving light. The trees, with their long branchless trunks are among the most photogenic I have ever seen. 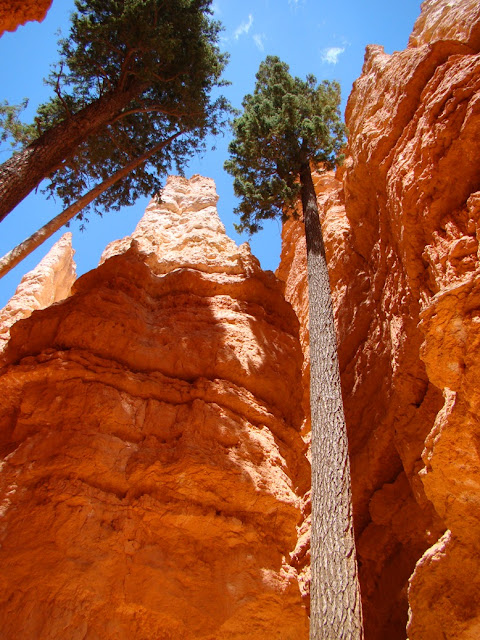 And then begins the climb back out! It's one thing to look down on distant hoodoos from a comfortable perch on the canyon rim, but the scale is totally different when you stand at their base looking up, knowing that you have to climb as far as they reach into the sky, and then some. 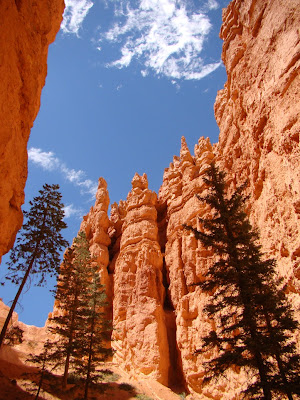 Mysterious little alcoves show up along the trail... 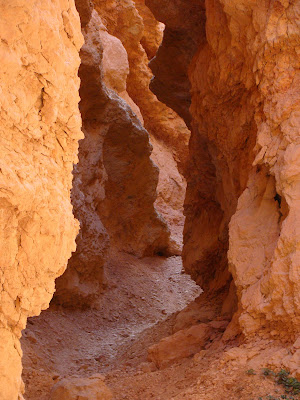 As we approach the rim, more and more of the countryside becomes visible. Arches in the hoodoos help to frame the distant cliffs of the Aquarius Plateau, composed of the same pink cliffs as Bryce, but several thousand feet higher on the other side of the Paunsaugunt fault. 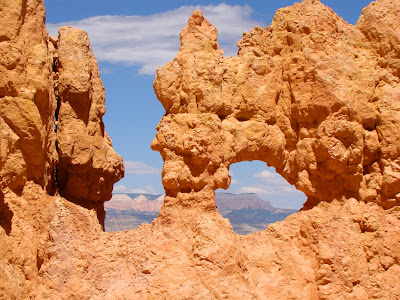 Close to the end of the trail we passed a hoodoo that recalled the monuments of Easter Island. The mind gives us all kinds of logic and order where such order doesn't really exist. 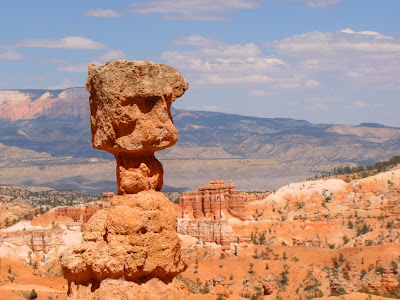 I suspect that black and white photos of Bryce Canyon would still glow with bright orange light...
Posted by Garry Hayes at 5:55 PM

Love that loop trail and being surrounded by the rock people.

Colorado is indeed a stunning state but that place looks amazing. So diverse, red and dramatic. I love the pictures. I bet it was scorching hot too?

Nice photos! Beautiful landscape out there. Thanks for the post.