The Abandoned Lands...A Journey Through the Colorado Plateau: We had to save a village in order to destroy it

"We had to destroy the village in order to save it."

The Ancestral Pueblo culture gets a lot of attention in archaeological circles. They left behind tens of thousands of sites throughout the Colorado Plateau, and their ancestors still live on in the Hopi villages and the pueblos of New Mexico that we visited earlier in our journey through the Abandoned Lands. There was a much more cryptic culture that we encountered towards the end of our journey.

We had left Arches National Park on the day after a spectacular exploration of the Canyonlands region and had pretty much a boring day. Really? A boring day on the Colorado Plateau? Well, sure they happen sometimes. We looked for fossils in some Paleozoic limestone exposures, and that was okay. But then it was five hours of showers, laundry, and grocery shopping in Moab. Then a failed attempt in the blazing hot sun of Green River trying to find some other fossils. Then a flat tire in the blazing sun. And then a long drive with no cool stops because we had fallen way behind schedule. And darn it if there weren't some great things hidden in those distant canyons. 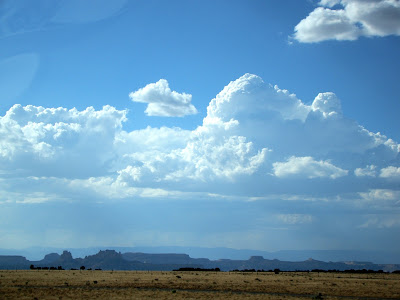 The next day was different. We spent the night at Castle Rock Campground in Fremont Indian State Park and had a chance to see one of the more important archaeological sites in Utah. Not because it was an awe-inspiring architectural wonder, but because it was the former home of the enigmatic Fremont People, one that may have told us more about these people than any site found up to this point in time. And  it was destroyed to make room for a freeway. 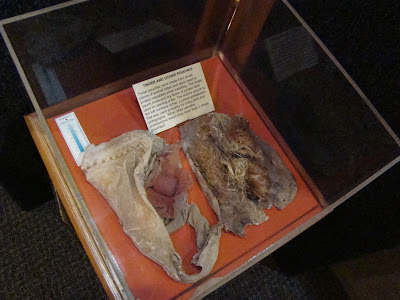 Interstate 70 crosses the Wasatch Range in a narrow canyon. This wasn't a problem when the highway had only two lanes, but when the road was widened in the 1980s a great deal of excavating was necessary. When the machinery started cutting through Five Finger Ridge, the remains of a large Fremont Village was discovered. There was no stopping "progress"; the village site had to be destroyed. At least the state recognized the value of the village artifacts and their close proximity to an extensive exposure of interesting and sometimes bizarre petroglyphs. 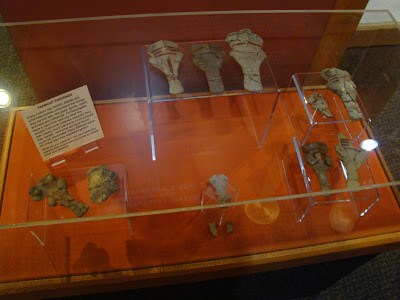 In 1987, the state of Utah established Fremont Indian State Park and built an excellent museum that is probably the best place to see artifacts and displays on the people of the Fremont culture, who lived in this area from 400-1300 AD. A system of trails, some paved and accessible, explores many of the most interesting petroglyph panels, including the strange pair below... 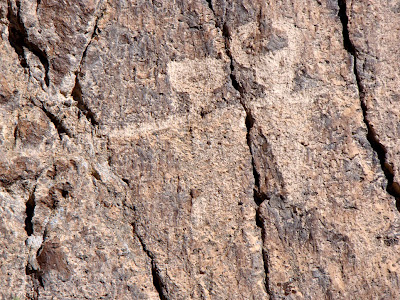 ...and clear evidence of space aliens! 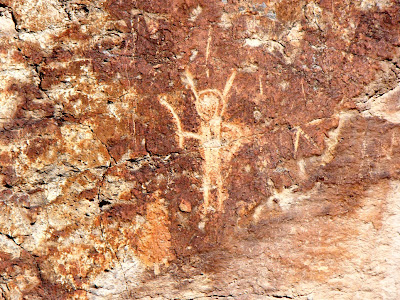 With this post I've returned to a blog series that I really need to finish! There are just a few more days to the journey, as we make our way south to Bryce Canyon and the Basin and Range Province.
Posted by Garry Hayes at 10:12 PM