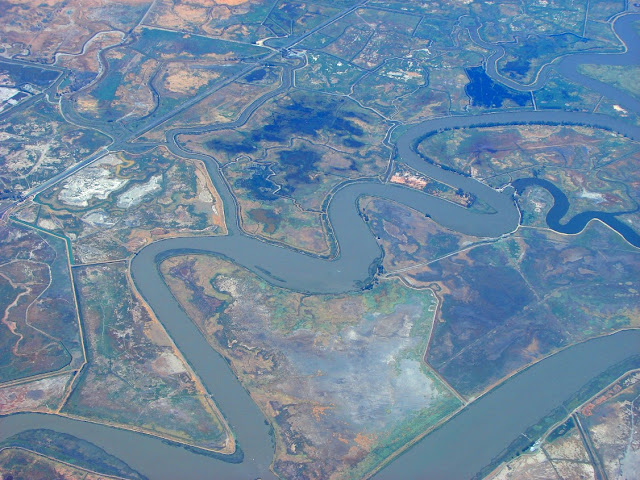 According to this interesting article from the New York Times, it's larger than 9 American states. It is the largest patch of Class 1 Soil in the world (i.e., the best for agriculture). More than 230 kinds of crops and produce are grown there, and the output represents 8% of the nation's agricultural output (on 1% of the land). Around 6.8 million people live there, and the average per capita income is lower than most of the rest of the country (it has three of the five poorest cities), and unemployment is far higher. It is California's Great Valley, my home.
The valley is 400 miles long, 30-50 miles wide, and is almost entirely flat (except for the Sutter Buttes, the highest elevations are 400 feet or less). It is drained by several major rivers, including the Feather and Sacramento Rivers to the north, and the San Joaquin, Kings and Kern Rivers to the south. Although most of the rivers leave the valley through the Sacramento Delta into San Francisco Bay, those in the south do not. They once ended in huge lakes like Tulare and Buena Vista, but today the lakes are long gone, having been dried up by agricultural diversions upstream.

I've long heard that only 5% of the valley remains in the natural state that existed prior to agricultural development, and from the air, this is obvious. All the times I've flown over it, I have been struck by the continuous patchwork of plowed fields (it clearly resembles the kinds of blankets my grandmother used to make out of the leftover fabric squares). There are a few tracts of undeveloped grasslands off to the south, but for the most part only the rivers retain much of their original vegetation, but only in a few places.

Today's photos come from three distinctly different parts of the valley's river systems. In the colorful top photo, we can see a portion of the Sacramento Delta, where the San Joaquin and Sacramento Rivers come together in a maze of islands that have been mostly converted to farmlands. The islands are protected (somewhat) from seasonal floods by a series of poorly constructed levees that are subject to destruction from even moderate earthquakes. This has set up what potentially could end up as California's worst possible natural disaster (at least in the monetary sense). The islands have been sinking due to groundwater withdrawal, soil loss, and oxidation of organic material in the soils. Most of them are now below sea level, with only the vulnerable levees keeping them from being flooded. Since the intake pumps for the California Water Project lie in the midst of these islands, broken levees will draw salt water into the delta, where the domestic water supply for most of the southern state is tapped. An earthquake has the capability to disrupt the state water system for several years. 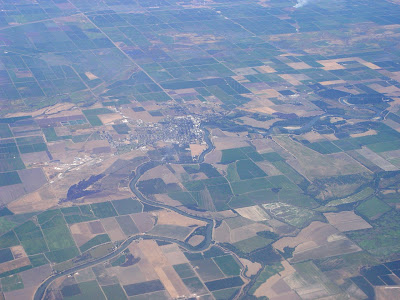 The north end of the Great Valley is drained by the Sacramento River which can be seen in the photo above, taken near Colusa. The landscape has been completely co-opted by agricultural fields, right up to river's edge. It looks like the river has been "conquered" and tamed by the works of humankind, but floods like those of 1997 and especially of 1861-62 could leave just about the entire area in the photo above under 10-20 feet of water (see my take on these ARkstorms here). 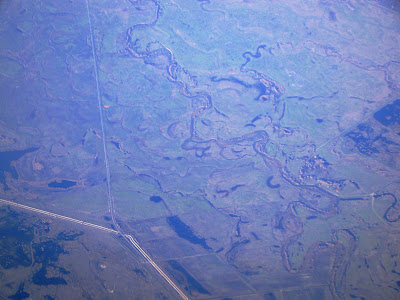 The San Joaquin River drainage contains some of last remaining natural grasslands and riparian landscapes in the Great Valley. The structure of the valley is that of a series of shallow basins separated by the alluvial fan systems formed by the Merced and San Joaquin Rivers. The basins have essentially caused the river to back up and develop wide floodplains where the streams meandered widely, changing channels in unpredictable ways. The area in the picture above is just north of the town of Los Banos, an area of abandoned meanders, bogs and swamps protected as the San Luis National Wildlife Refuge and Great Valley Grasslands State Park. The land is not entirely unaffected...decreased flows caused by reservoirs and diversions upstream have caused many of the swampy areas to dry up. Efforts (and negotiations) are ongoing to increase river flows in a hope of rebuilding the disrupted ecosystems, especially those of the salmon which used to be common in these waters.

The Airliner Chronicles is one of my on-again/off-again serial features, which is usually updated whenever I fly somewhere.
Posted by Garry Hayes at 4:54 PM