The Airliner Chronicles: There Were Glaciers Here... 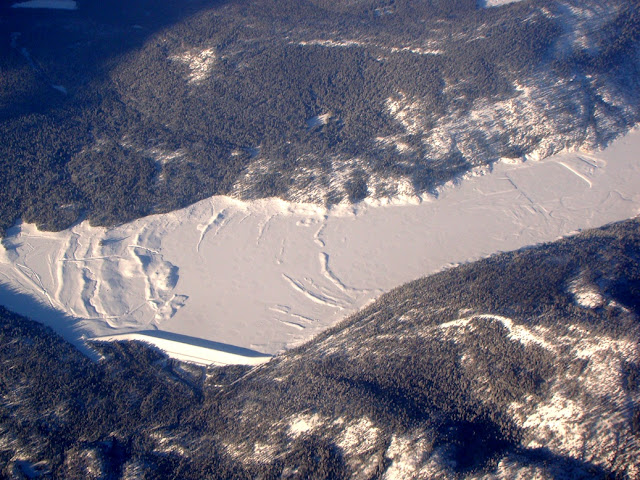 Have you ever wondered about recessional moraines? I guess not too many people have pondered such a deep question, but on my recent flight over the Sierra Nevada, I was excited to see what was without a doubt the best example I've ever seen of this feature.

Recessional moraines are the piles of glacial till (loose debris) that form around the terminal margins of glaciers that are in the process of melting back over decades or centuries. Quickly receding glaciers might not leave such ridges, but if the climate briefly stabilizes, the moraines will form around the end of the glacier. Such moraines can be hard to see at times. There are several prominent moraines in places like Yosemite Valley and Kings Canyon, but they are covered by forests and are thus difficult to see from above. When the reservoir holding back Lake Thomas A. Edison in the upper drainage of the San Joaquin River was constructed, the forest cover was removed. During the winter, the lake is mostly drained, and with the low sun angle on snow, the moraines stood out in sharp relief.

The moraines were mapped by Joseph Birman in the 1950s as Tioga stage glaciers, dating back to around 20,000 to 13,000 years ago. This was the last major glacial episode to affect the Sierra canyons, and was responsible for most of the lakes and glacial polish that can be found in the mountains today. 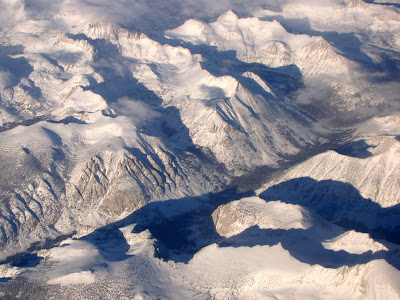 Moments later we were flying along Mono Creek leading to the Sierra Crest, where I could see a multitude of classical glacial features. In one view I could see all the features I am always trying to sketch on the chalkboard in my classes illustrating the erosional features of alpine glaciation. I've labeled some of the most obvious features below.

As uncomfortable and inconvenient as flying can be, I was having a pretty good time! 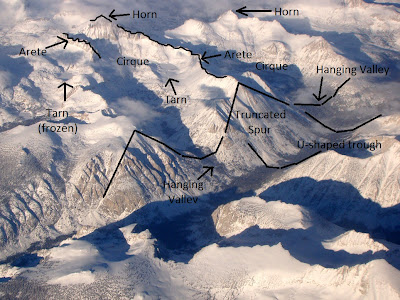 The Airliner Chronicles is one of my on-again/off-again serial features, which is usually updated whenever I fly somewhere.
Posted by Garry Hayes at 12:18 AM

Thank you for posting these pictures! With your permission, I will use them in my Glaciology powerpoint.

Absolutely! That's what they are there for. Thanks for asking.