What To Do on a Rainy Day? Explore the Mother Lode Underground! 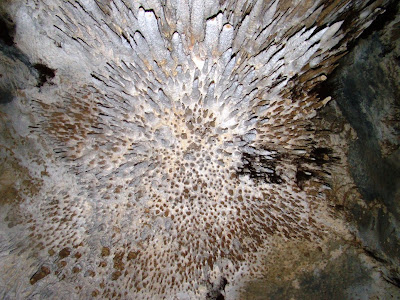 So what does one do when an atmospheric river storm is barreling towards your region, with an expected 10"-20" of rain in some places? If you are among the intrepid members of the Geology Club at our school, you go caving! It's not that they planned on doing a field trip during one of the heaviest storms of the year, but this was scheduled two months ago. They looked at the weather radar and decided to go anyway. In the end we caught a bit of breathing space between two major storm systems. It was mostly drizzling and misting on us as we hiked the mile or so down the hill to the cave entrances.

California is not exactly known for her cavern systems, but the state does in fact have around a thousand known caves, and some are world class; one has nearly thirty miles of passageways. Seven or eight of them are operated as tourist attractions (Black Chasm, California, Mercer, Moaning, Boyden, Crystal, and Shasta are the ones that come to mind). Many are on public land and plenty more are on private land (how cool would it be to have your own cave?) but their locations are not widely publicized, because a well-known unprotected cave is quickly dismantled by vandals, and the damage to caverns is permanent. You can't grow stalactites in a human lifetime.

We explore a couple of wild caves in the hills around Columbia. They occur in pods of marble that originated as carbonate reefs and shelf deposits in the Pacific Ocean in late Paleozoic time which were accreted to the edge of the North American plate by the process of subduction. The suite of exotic rocks are called the Calaveras Complex. 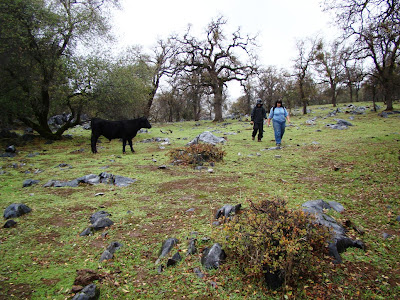 We had to pay obeisance to the mystic black cows that guard the cave entrances (well maybe anyway; they certainly like to hang out on the grass-covered plateau where the caves are located). 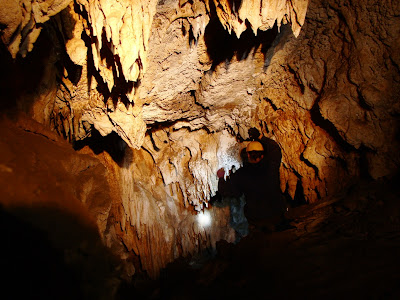 There were two caves that we explored today. The first was a smaller "practice" cave that provided a few crawling and climbing opportunities and some nice speleothems in a small gallery. The cave had three entrances and several small rooms that angled away from the central area. 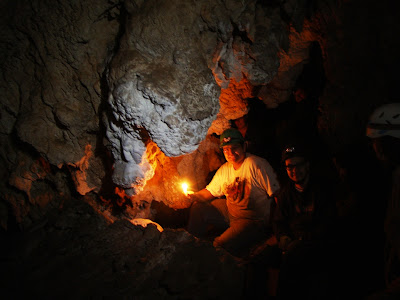 Caves are explored these days with flashlights and headlamps, but it hasn't always been that way. The miners used candles, and the native Americans would have used torches. The caverns have a completely different aspect by candlelight. There is literally a primal mystery hidden in the shadows. I developed a greater appreciation for the cave paintings done by our distant ancestors in Europe. Can you imagine being led into the depths, and then have the torchlight suddenly play on paintings of animals and people in the darkest parts of the cavern? 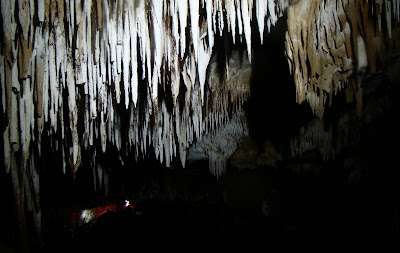 The other cave is a bit more of a challenge. One must first climb down some slippery boulders into the collapsed sinkhole, and then push up through a very narrow passage that is a pretty tight  squeeze...especially for late middle-aged fat professors. But what a payoff! The 150 foot-long main room is festooned with hundreds of unbroken stalactites and columns. The ceiling was high enough to prevent vandals from reaching and breaking them off. And frankly, most vandals are lazy bastards; it's a tough hike and fairly difficult to find unless you know exactly where to look (on my fourth trip to the caves many years ago I got lost in the fog and wandered aimlessly for an hour or so). 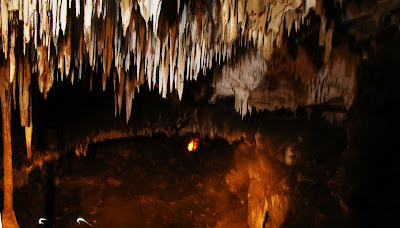 If you wonder about cave life, there are certainly creatures living in the darkness. There are usually two or three bats hanging on the highest ceiling (although there is no light, I suspect there is a vertical entrance to the cave somewhere, because I can't imagine bats negotiating the narrow hole we climb through, but maybe they can).

On this particular day we saw half a dozen 5-inch-long millipedes. I'm told they are mainly scavengers and don't bite, but I didn't experiment with the possibility today. 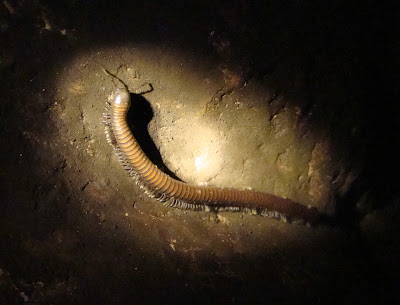 I didn't see any of them today, but a couple of years back we saw a beautiful orange newt deep in the cave (I think it is a Sierra Newt, but as in all things biological I am open to correction). 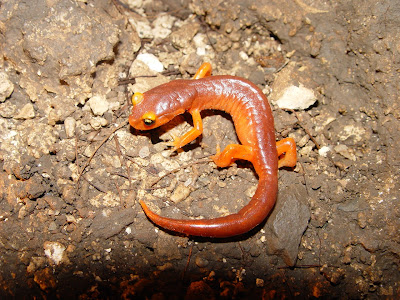 Wow, Thanksgiving is over and Christmas is coming, but I'm already out of shape and overweight. The climb up out of the cave and the long mud slog back to our vehicle was tougher than it should have been. But what a nice day it turned out to be...
Posted by Garry Hayes at 11:38 PM

Definitely worth the effort. The world below our feet is incredible and awesome.

I desperately would love to see the cave paintings in Lascaux!!

Your salamander is a Yellow-eyed Ensatina (Ensatina eschscholtzii). Similar coloration to the Sierra Newt, but distinguished by smoother skin, more slender build, and the very well-defined costal grooves (the grooves running along the trunk that outline the muscles).

These guys are very fond of caves (much more so than newts I think, although that's just my impression). They have an interesting distribution with one population in the coast ranges and another in the Sierra Foothills - presumably they either crossed the central valley at some point or had a broader range in the past that has shrunk into two unconnected fragments.

Thanks! Someone may have told me that in the past, but then I was looking at pictures of Sierra newts and the color was so distinctive. Oh well, that's what you get when geologists play biologists

It's an easy confusion to make. Some have suggested that the Yellow-eyed Ensatina is a newt mimic. Newts are poisonous, so the similar coloration may be an effective deterrent to raccoons and herons, fooling geologists may just be an unintended side effect.