A Bit of River Perspective: The Eel River in Northern California 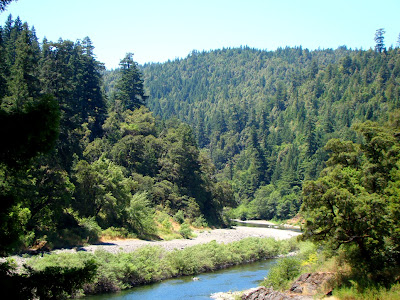 I was driving home from our Christmas visits with the family in central Oregon today. Since we were following Highway 101 through northern California's Redwood Country, we had a chance to look at the Eel River after several days of fairly intense rain. The picture above is a summertime view of the river from 2010 for sort of a baseline for comparing. As we drove along the river today I noticed it was filling the channel and inundating a fair number of trees. I wasn't thinking that it was flooding exactly, but it was full of sediment and moving fast. We stopped to grab a few pictures. 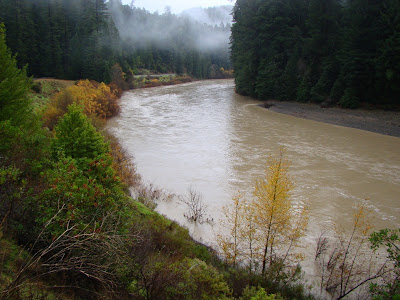 The river today was flowing at about 10,700 cubic feet per second. That would be flood stage on our own Tuolumne River, but was an unremarkable amount of water comparatively speaking. On Christmas Eve it was just over 20,000 cfs. We stopped at Miranda and had a bit of a shock. Some government entity had painted a river gauge on the bridge column to provide a bit of perspective... 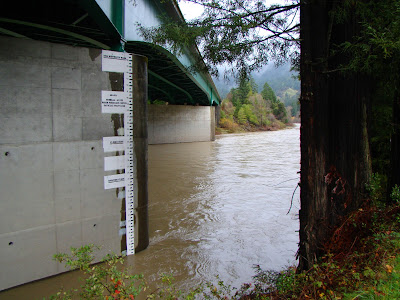 Needless to say, the damage was incredible, with entire towns being washed away. According to the Department of Water Resources, the North Coast rivers dumped 10.4 million acre-feet of water into the Pacific Ocean in six days. For comparison, Lake Powell on the Colorado River, a 186 mile long reservoir, holds 27 million acre feet. The average yearly flow of the Colorado is 14 million acre feet.

In 1957 the ell river at island mountain a train stop in those days flooded and the canyon 200 feet wde at the bottom 85 feet below the tiny town had water u to where we lived at that height the river as 350 feet wide. I was dumb enough to go on the rail road bridge that crossed over the flooded river and was interested in ropeing small animals on top of floating houses until my mom heard what i was doing.the highlight of that experience wa when we saw a huge 3story taveran hit the bridge structure and role under the bridge and as i ran to the other side of the bridge the river was nothing but a lumber yard. It as long ago. Thats why the north western pacific railroad threw in the towel and now no more train traffic to Eureka.my step day and i used to go to a canyon an hour away to find gold nuggets as his hobby was making gold chains for watches.take care

I caught a ride from a local in 1969, when I was at HSC. He was an old-timer; most likely gone now. Anyway, we got to talking about the big 64 flood and he said, " I had some big cottonwood trees down near the river(on his property) at Rio Dell. In the 56' flood, water came all the way up, and around those trees. In 64, the river took them" right out" !