This is a story of the evolutionary journey from the first furry things to Fifi the toy poodle...the story of the dog clan on Earth and how a group of sometimes vicious carnivores turned into one of the closest companions to humans on the planet (don't get me wrong; I love cats and horses too). This will be a two-parter for reasons that will become clear. I don't know whether to call the ending happy or sad, because I am still in the middle of it.

To anyone with smattering of knowledge of things biological, the idea that predators are going to exist in any complex ecosystem is absolutely logical. Since Cambrian time 545 million years ago, and probably earlier, there have been organisms that cannot make food for themselves through photosynthesis, and must survive by consuming carbohydrates that have been produced by other creatures and organisms. Early on there were bizarre creatures like the anomalocaris that swam about munching on the trilobites and other early Paleozoic sea creatures. Fish ate each other, sharks ate anything that moved, amphibians and early reptiles chased and consumed each other, and in the Mesozoic era, evolution provided land ecosystems with some of the most terrifying meat-eaters of all time: the tyrannosaurs and the raptors (always good fodder for the Jurassic Park franchise).

When creatures like the Velociraptor and Deinonychus were munching on plant-eaters like Tenontosaurus and Zephyrosaurus, small furry creatures were running about the underbrush trying hard not to get stepped on or eaten by the larger dinosaurs. They were more likely than not to be active at night. The mammals arrived on the scene not too long after the dinosaurs, but did not become a dominant part of terrestrial ecosystems until a giant rock from space took out their larger competitors (or whatever it was that did in the dinosaurs). Even with the dinosaurs gone, mammals still had to contend with their offshoots, the birds. Some early Cenozoic birds grew to such large proportions that I can imagine their mammal contemporaries rolling their eyes and thinking "not again".
There were some early Cenozoic predators called creodonts, and others known  as mesonychids who eventually overcame the birds in competition for the top spots in the food chain. From 55 million to 35 million years ago, they pretty much did what they wanted to in regards to procuring food. Smaller weasel-like predators also thrived, and from these smaller creatures, the carnivorans evolved.

During Eocene time, around 40 million years ago, the carnivores diverged into the two main clades that we recognize today: the Caniformia (dogs, bears, weasels, skunks, raccoons and pinnipeds), and the Feliformia (cats, hyenas, civets, and mongooses). Members of an early Caniformia family, the Amphicyonidae, are often informally referred to as "bear-dogs" in the sense that they were probably ancestral to both groups.
Evolution is a matter of isolation and divergence, and so it was that wolf and fox ancestors diverged around 5-10 million years ago, and coyotes and wolves diverged less than two million years ago. They are close relatives. But not as close as the domestic dogs and wolves. Dogs are wolves in the sense that their DNA is essentially identical. They are the wolves that were domesticated and bred for desirable characteristics, starting around 15,000-30,000 years ago. The intense relationship between humans and dogs had begun.

Biologists debate about how domestication took place. Some say that humans raised wolf pups, and eventually their descendants adapted to life with humans. Others argue that wolves took to scavenging the waste along the margins of human camps, and eventually became comfortable with the close association with humans. I'm no biologist, so I really can't judge one way or the other.

One thing that enabled domestication of the wolves is that they are pack animals, social beings. Pack life has advantages but it can also be harsh and unforgiving. The smaller weaker animals get less food and fewer chances to reproduce. Rising through the hierarchy required vicious fighting, and a potential for serious injury. I can easily imagine that the rejects from a pack might find a slightly better life around the margins of human settlements, even though they might have been driven off (or sometimes even eaten). But sometimes they also found in human groups another pack. They might never rise to the level of alpha couples, but the food was often better. 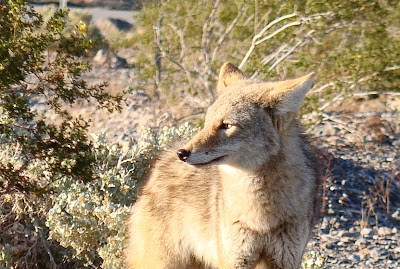 Another thing I know (and so does everyone who has ever had a dog), is that I can gaze into the eyes of one of the canids, and at least partially comprehend their inner life. This is not something that I can do with reptiles, or amphibians, or fish. I certainly cannot do this with invertebrates like insects, crabs or lobsters (there's a reason restaurants will let you see a live lobster that you will soon be eating, but not a cow or a pig). Dogs fit easily into a human pack because they understand our emotions, our body language and our spoken language. They listen to and watch our every move, and every signal (compare this to the way a cat will pointedly ignore such things). To a great extent we also understand their emotions; we know when they are happy, sad, content or scared. 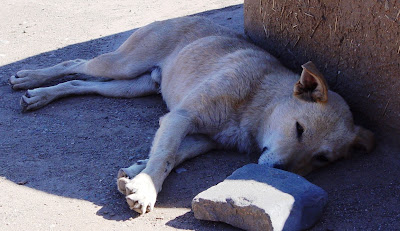 So, a group of the canids cast their lot with humans. They joined up with us in a symbiotic relationship in which they worked for us as guards, hunters, and companions, and we provided them with food, and a pack in which life was a bit less harsh. We had formed a social compact. Not exactly a compact of equals, but a social agreement nonetheless.

What happens when we break that social compact?
Posted by Garry Hayes at 10:20 AM