Watching a Slow Motion Apocalypse: The Relentless Erosion of the Sea 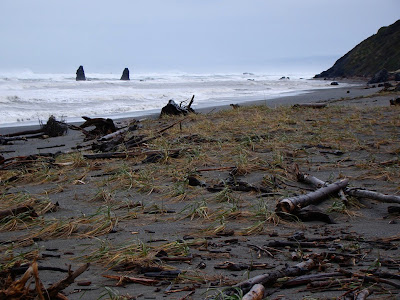 Now that the apocalypse is over and the world is ended we can get back to life and celebrate what is beautiful about our planet. I wasn't going to take the chance that the world would end with me sitting on a couch at home bored, so I was on the road on the northern California-southern Oregon coast during a pretty major storm. A couple of feet of snow was expected in the mountains, along with several inches of rain in the coastal areas and some very high winds. It was not a day for photography: dark skies and rain made things pretty tough. I only got a few photos that I thought were worth sharing.

We were at the Kuchel Visitor Center in Redwood National Park near Orick, California for a short break. I wandered down towards the beach (without a jacket as usual) and snapped a few shots of the sea stacks just offshore. The surf was running at 10-15 feet and maybe more, and the wind was whipping spray off the whitecaps, making for a violent geologic environment. 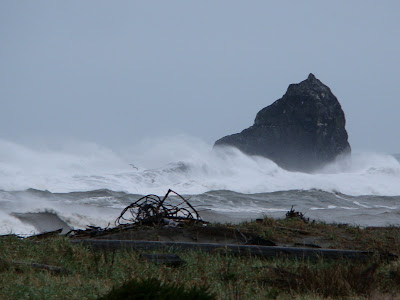 Large winter waves are among the most powerful of the forces in geology, capable of dislodging huge blocks of rock and tumbling them to sand in an incredibly short period of time. One can look at these sea stacks and consider how short a time they will exist before disappearing into the surf. Or...one can consider that they are the last remnants of what used to be land. Erosion is a relentless power that is continually and forever changing the face of our planet despite our best efforts to contain it. 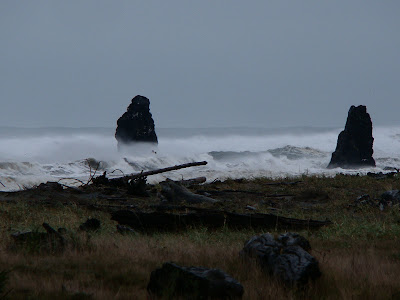 Worried about apocalypses? It's fun to play with the concept sometimes (I love some of the Google+ and Facebook posters today), but really, it's pretty conceited of us to think that we are such a twisted generation that we get to see the end of the world. There have been plenty of people worse than us in the past, and in the future there will be plenty more. The world isn't going to end. But we do have the power to change the world into a slightly better place before we leave it. The real apocalypse is taking place slowly, one grain of sand at a time. The world will change and all things will pass away. But we have been given a short period of consciousness, and the company of many others, and we have choices about what we do with our short existence on planet Earth.
Posted by Garry Hayes at 12:08 AM

I would recommend this book. This author has many other books that are wonderful and this one is great too. http://www.amazon.com/Apocalyptic-Planet-Field-Guide-Everending/dp/0307379094