From the New Great Valley Museum: Learning from a different perspective (many of them) 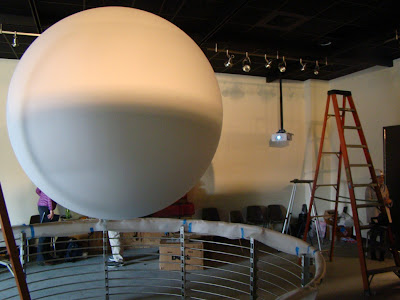 I took a few hours away from grading final exams to get some training at the Great Valley Museum's new facility that will take up most of the bottom floor of our nearly completed Community Science Center. The Great Valley Museum is a modest affair (befitting the town of Modesto?) occupying a few small ancient buildings just off campus. It is ironic to realize that most of their community outreach has been away from the museum and in the hands of their traveling teachers. But that is about to change in a big way: the Great Valley Museum will no longer be a small museum of primary interest to nearby schools, but will instead be a great reason to visit the town of Modesto in California's Central Valley. There will be some rather striking exhibits about the natural history of the region, but there will also be a state-of-the-art planetarium (with a new generation star projector that is the first to be installed in the United States), a Foucault pendulum, a natural outdoor laboratory with native vegetation, and a fully equipped observatory. And there will be a big white ball floating in the big room at the end of the building! Well, it's white until the projectors are turned on. Then some magic happens (well, not magic, but science). 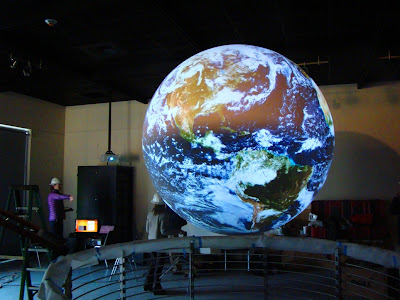 Four calibrated projectors make the sphere glow with a totally three dimensional look at planet Earth, and a great deal more. There is nothing static about this orb. As you will see in a moment, it rotates, and can be manipulated in any direction desired by the presenter. 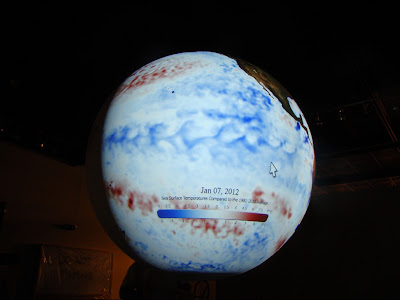 Some three hundred programs are available in nearly all the sciences, but it especially shines in biology, meteorology, climatology, and geology. Many of the programs provide real-time or near real-time views of the earth. Above is a view of sea surface temperatures on January of last year (and is cycling through December 11, 2012, the day I was looking at it.). 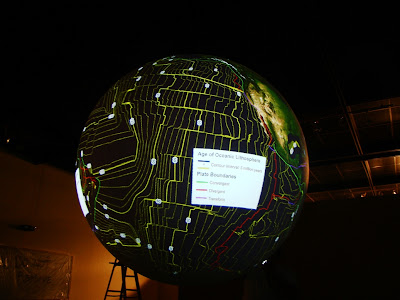 The view above shows the age of the sea floor, and the location of plate boundaries across the planet. Nothing quite prepares you for the world in motion. I only got a couple of videos that show things moving. The first shows a rotating Earth, kind of a background appearance when the unit is on, followed by a demonstration of weather systems across the entire planet, visible all at once.
Then our trainer demonstrated a series of programs, including near-real-time weather and world seismicity, sea surface temperatures, and world snow cover during the last year. It was astounding to watch, and awakened a million ideas for use in the classroom (or more like moving the classroom into the museum). I'm especially looking forward to demonstrating plate motions through time.
They showed us a few more programs which were quite out of this world (speaking figuratively, of course). Can you guess what celestial bodies we were observing? 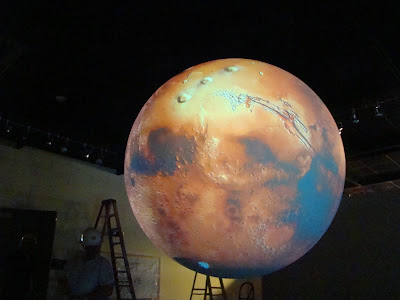 I was really impressed with being able to walk around and see the full scale and perspective of each of these planets. The biggest rift valleys and the biggest volcanoes in the Solar System are visible in the photo above. They don't stand out quite this way on Earth! 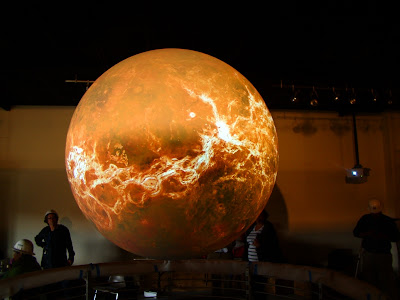 The body above was even more intriguing to me. I've seen plenty of maps, but they don't quite have the impact of this glowing sphere. 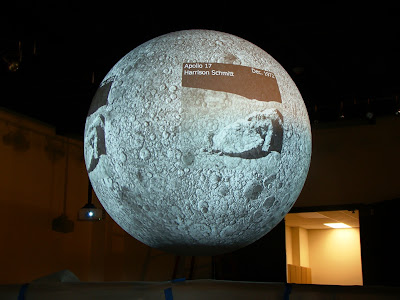 The pictures pretty much give away the identify of the small moon above. But below...wait, that's no moon! 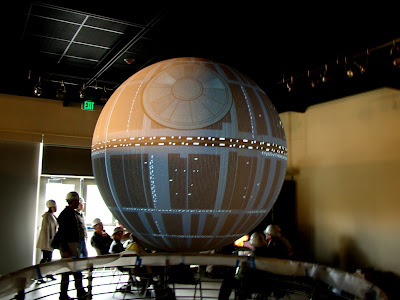 I have a bad feeling about this, Luke!

The Science on a Sphere program is a product of a NOAA, and more information can be found at the link above. If you ever come through Modesto on your way to...wherever...be sure to stop in! The museum will be opening sometime this summer. Here is the Great Valley Museum website.

That sphere is the most awesome! What an amazing teaching tool.

I think I heard that the South Rim Visitor Center has one of these now (they mentioned it at our training). Did you ever have a chance to see it this summer?