The Abandoned Lands...A Journey Through the Colorado Plateau: A day in the canyonlands, a fiery end 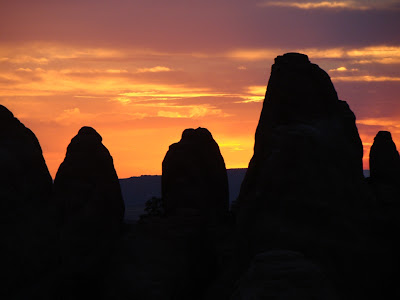 So what happens in a single day of one's life? Somehow, today involved a medical appointment, brunch with Mrs. Geotripper, watching the rain fall (it's rare enough here to be a spectator sport), grading some papers, and teaching an evening class. Pretty busy I guess, and pretty mundane, but if I had one day to go in my life, this hasn't been the kind of day I would choose.

If I was ever given the choice, I suspect my final day would be something like the one I've been describing for the last four posts in the "Abandoned Lands" series. I would want to see as much of the most beautiful corners of the world as I could, and the landscape encompassed by Arches National Park, Canyonlands National Park, and Dead Horse Point State Park in east-central Utah just about fits the bill. 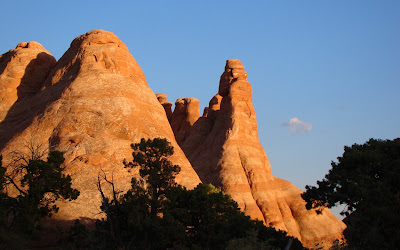 From a fiery sunrise, it progressed to a hike to see the largest arch in the world, and a look at some wonderful arches in the Windows Section of of the park to some incredible pictographs and petroglyphs in Nine-Mile Canyon (the pictures at this link are from an earlier trip), and some sweeping vistas at Canyonlands and Dead Horse Point. It was a long day, but there was one more act.

Most of the students elected to watch the sunset from a perch near Delicate Arch, but I'd done that a few times. Plus, the camp cook crew needed a ride back to the campsite, so I drove them up to the end of the road at Devils Garden Campground. And then I took off on a new trail I had never followed before. It was a short trail out to Broken Arch. 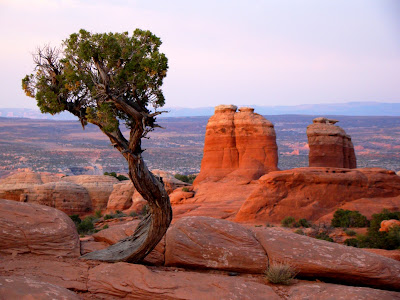 The trail followed several fissures in the fins east of the campground and then climbed across the barren slickrock to a ridgetop that offered a nice panorama to the north and west. A singular Juniper survived in a sandy crack along the ridge. 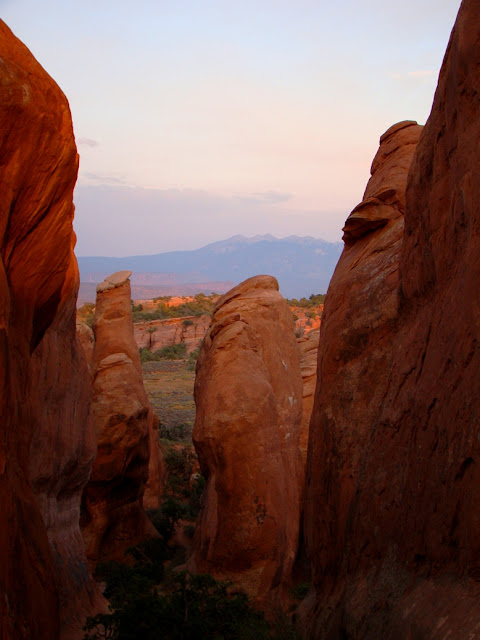 The trail then dropped through a deep fissure to a sage flat. The La Sal Mountains, massive laccolithic intrusions that exceed 12,000 feet in elevation were framed by the fins. 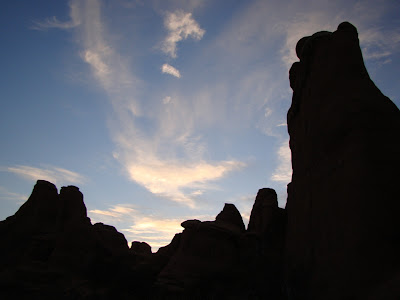 Truth be told, I had kind of wandered off from the campsite without telling anyone where I was, and I had no flashlight, so with the sun going down, I knew I had to turn around before it got too dark. The fins rose high against the darkening sky. I came over the ridgetop to the sight of one of the most glorious sunsets I had ever seen, and I've seen a great many of them. To call it a fiery sky carried kind of a double meaning because a wildfire had broken out in the distance, adding reds and browns to the yellows and oranges of the setting sun. 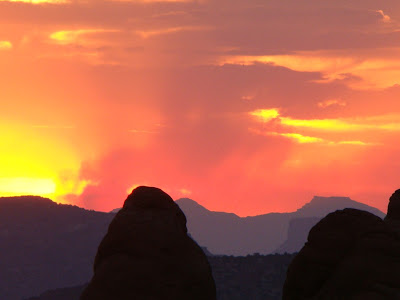 Yeah, this is the kind of day I would have if it were the last day of my life, and if I was surrounded by my friends and family (and on this trip I was, actually). But given an actual choice I would bargain for a few more days. There are still too many places I haven't seen yet.
Posted by Garry Hayes at 7:39 PM

Beautiful pictures. I can't think about where I would like to visit in my last moments. When I read that you wandered off on your own, I was kinda worried because that's not always a good idea. But I reasoned you are alright now otherwise you wouldn't have made this post!

Thanks Carlyn Girl! I was back before it was totally dark, but one is taking chances when walking alone. It's a bad habit of mine sometimes.