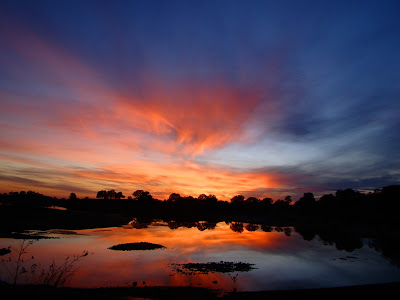 It's a strange feeling...NOT traveling for the Thanksgiving holiday. But it didn't keep us from taking a little excursion the other day. The Sierra Nevada foothills, which rise just a short distance east of my town, are one of the most utilized terrains in California. The land was pretty well overturned by the gold seekers in the 1850s: some parts were blasted with water cannons (hydraulic mining), while bottomlands near the Tuolumne River were dredged. The low hills were deemed a good spot to build reservoirs both small and large to harness the power of the river and to provide irrigation water for the valley below. The remaining open spaces were utilized by cattle ranchers for livestock grazing. And these days, fruit orchards are expanding eastward into the mountains. 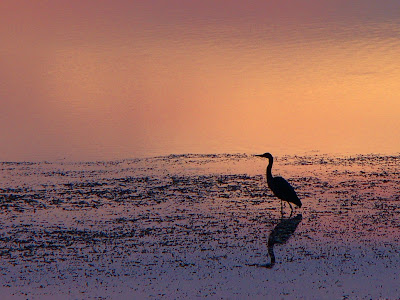 One of the earliest dams was constructed on the Tuolumne River near La Grange. La Grange Dam was completed in 1892, and is used to divert some of the river into a series of canals and levees that allow the irrigation of tens of thousands of acres around Turlock and Modesto. One of the canals flows into a small reservoir called Dawson Lake. That's where we found ourselves as the sun was setting. 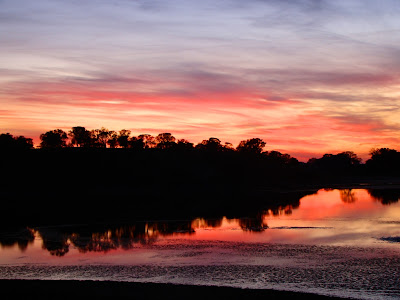 Sunsets have a way of taking mundane landscapes and turning them into something beautiful. The lake was nearly empty, but enough water remained to reflect the fiery skies. An egret was looking for the last few fish in the shallow ponds. 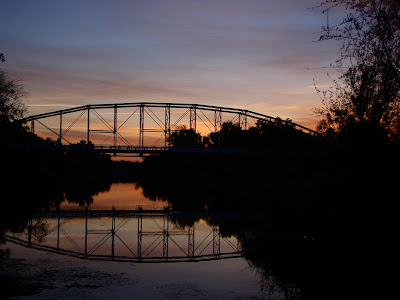 We took a brief look at Old Basso Bridge, which was built over the Tuolumne River about 1911, and was retired from service in 1986. It is preserved for pedestrian use these days (apparently one truck accident in the right spot could have collapsed the entire structure). It was a pretty afternoon, a release from a couple of stressful weeks.

I have lots of things to be thankful for. The land I live on is one of them.