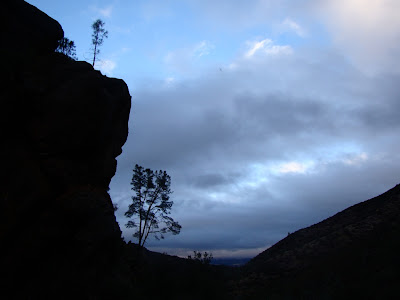 It was our last field studies trip of the year. After our explorations of the San Andreas and Calaveras faults in the Hollister region of the Coast Ranges, we headed south on Highway 25 to Pinnacles National Monument. Pinnacles is one of our unheralded gems, a beautiful landscape with an unusual origin. 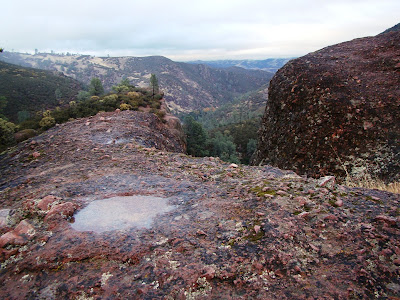 The rocks are strange looking, and far out of character with the "normal" rocks of the Coast Ranges, which tend to include graywacke sandstone, shale, serpentine, and some occasional expanses of granite and metamorphic rock. The knobby rocks in the photo above are the result of volcanic mudflows and lava flows. The Pinnacles are the eroded remnants of a 23 million year old volcano. The scenery was so unique that President Teddy Roosevelt declared the region a national monument in 1908, just two years after the first monument was established at Devils Tower in Wyoming.
The park preserves the remains of five rhyolitic cones that once may have towered 8,000 feet high. Erosion has attacked the volcanic rocks with a vengeance, widening cracks and fissures to form the pinnacles for which the park is named. The mountain ridges are fairly arid, covered mainly with shrubs and Gray Pines, but deep in the canyons and gorges, pockets of cool moist air and permanent springs allow much more lush vegetation to thrive.
No one realized it in 1908, but Pinnacles preserves one of the more exciting bits of geology in the state of California. By 1977, geologists had realized that Pinnacles was only half of the original volcano, and that the other half was on the far side of the San Andreas fault...some 195 miles away in southern California near Lancaster in the Mojave Desert. Down south, the rocks are called the Neenach Volcanics. Such huge lateral offsets provided overwhelming evidence confirming the theory of plate tectonics (the San Andreas fault is a transform-style plate boundary). 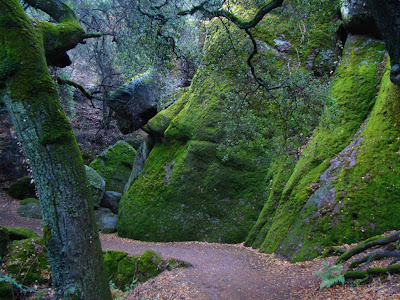 Oh, and there are some Pinnacles! I actually didn't have a good perspective on them on the trail I took on Saturday, but here are a couple... 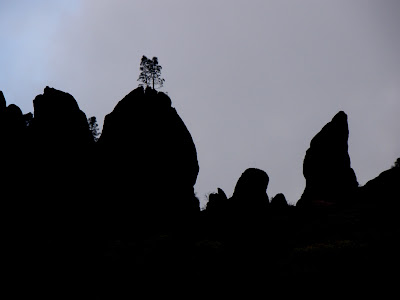 I'll wrap up my exploration next time in the unique caves of Pinnacles National Monument.
Posted by Garry Hayes at 12:04 AM

Wow. That is completely FREAKY about the other half being in Mojave. Jeepers.

I LOVE Pinnacles. Have only been there once, but on a short hike I saw a swimming snake (garter, I think??), dozens of exoskeltons of dragonfly nymphs (on reeds emerging from a pond) that had emerged from the water to become their winged adult selves. Then I had hopped a smidge off trail and spied an outcrop of stones with lateral cracks in them (almost sunk into the hillside, so I'd never have seen it from the trail) that a large snake had used to shed the outer layer of skin. A perfect, LARGE intact skin. Of course I left it there, but it took some serious will power. =)

And that's not even mentioning the condors (which I didn't see) and the bats and rare froggies (which I did!).

What a cool, cool park.

I definitely need to see Pinnacles again. Being in the south San Francisco Bay there's no excuse for it having been over 20 years. Your wonderful pics inspire me.

But Gary, if I may pick a bone (as someone who recently wrote an MS thesis on the rocks surrounding the Santa Clara Valley): it's _serpentinite_. Serpentine is a mineral group.

Touche! Yeah, I know the difference, especially after the episode a few summers ago when some folks wanted to remove serpentine (serpentinite) as our CA state rock. I was just following the lead of our legislature in getting the definitions backward....

Do you happen to know where the other half of Mount Calavera in Carlsbad, CA is located? It is also a 22-23 million year old volcano.