Inside the Pinnacles Volcano: the Talus Caves of Bear Gulch 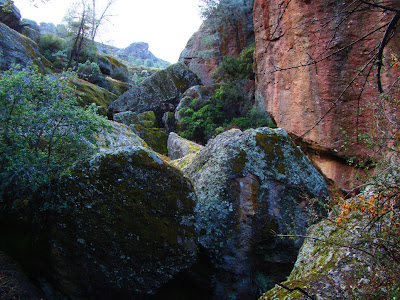 How does a cave originate? Most often, solution of limestone or marble is a cause, and lava flows will sometimes develop lava tubes. Coastal waves will carve out sea caves. There are a few other kinds of caves, but the caves at Pinnacles National Monument are rather unique. They are talus caves. 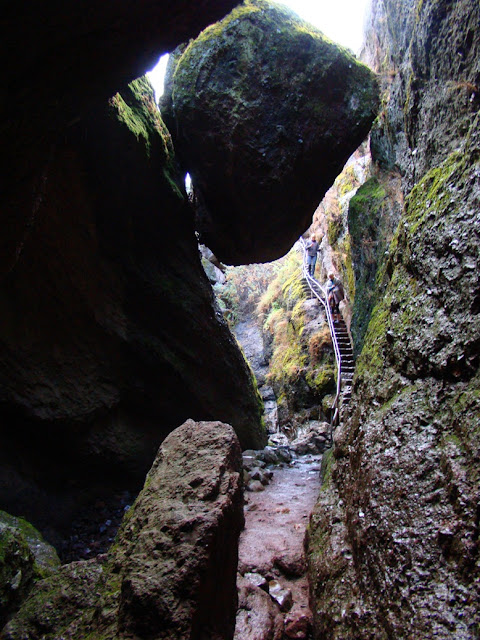 The term 'talus' refers to the chunks and blocks of rock that usually accumulate at the base of cliffs. The rapid journey of a rock down a cliff usually has the effect of shattering the larger boulders, so openings in the talus piles are rarely large enough for humans to explore for any length. The circumstances at Pinnacles were different. 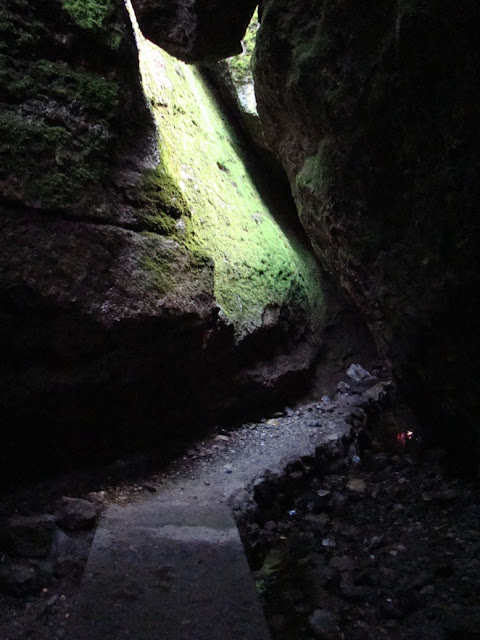 Pinnacles National Monument preserves a large rhyolitic stratovolcano dating to around 23 million years ago. The layers along the mountainsides appear to have been tilted, but they actually preserve the original steep slopes of the volcano. Vertical fractures called joints are present throughout the rock exposures, and erosional forces took advantage of the joints to form deep slot canyons with near vertical sides. 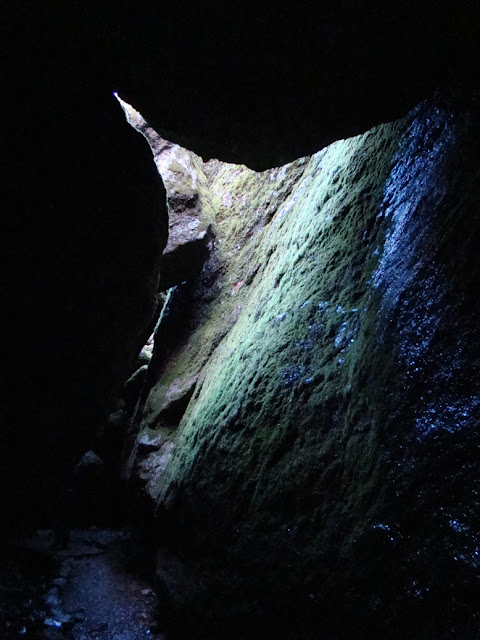 As the slot canyons grew deeper, large chunks of the rhyolite flows and lahar deposits slid down the slopes and into the canyons without falling any great distance. Eventually the huge boulders filled the slot canyons, forming a ceiling over the watercourse deep below. 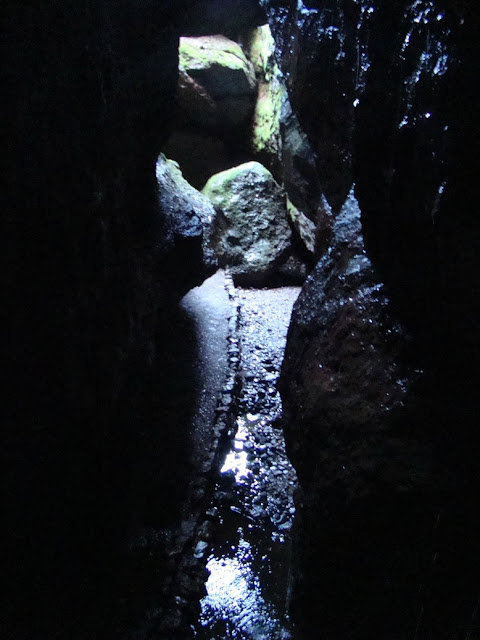 Two cave systems are accessible at Pinnacles for exploration, the Balconies Caves (500 feet long), and Bear Gulch Caves (1,700 feet long). Both are long enough to require flashlights. I haven't been in Balcony Cave yet, but last Saturday I made sure to climb through Bear Gulch. The Civilian Conservation Corps put in a series of stairways in the 1930s, and every time I walk through I see images in my head of hobbits, dwarves, and the Mines of Moria. They are that cool looking! 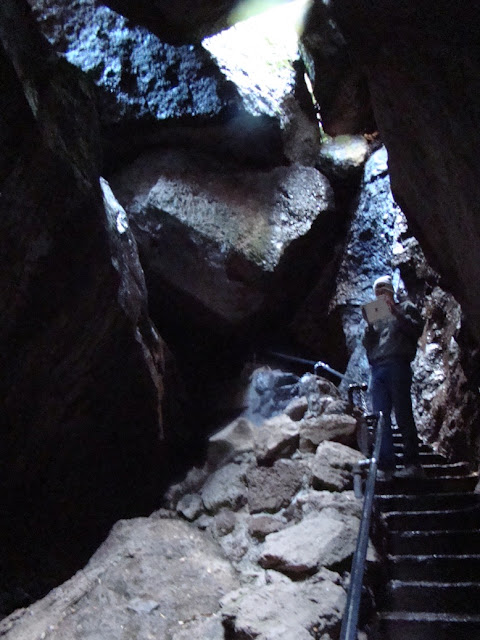 We reached Pinnacles last Saturday on the heels of a decently heavy rainstorm, which added a whole new element to the exploration of the caves. There is almost always a small trickle of water flowing through the deepest part of the cave, and there are several small waterfalls in the cave passages. But when I walked through the other day, the water was also pouring off the boulders, causing an odd underground rainstorm. The splashing water reverberated throughout the cave. 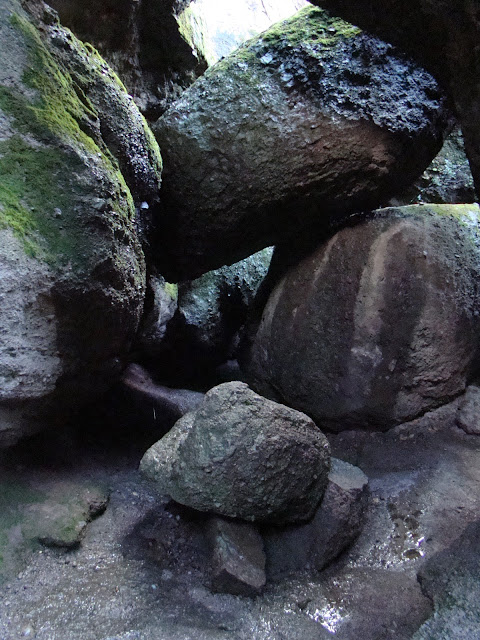 The caves are intermittently closed because the cave also hosts the largest colony of Townsend's big-eared bats between the Bay Area and Mexico (click on the link for closure information). There is occasionally a flooding hazard as well. The main closure is between May and July when the young bats are being born and cared for. The lower cave is open for much of the rest of year, but one should check before visiting. 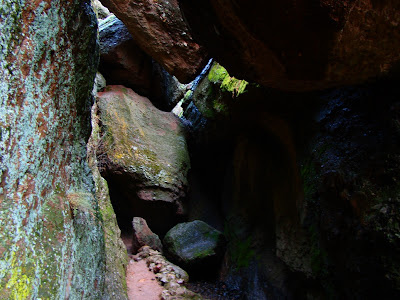 On a future trip I will figure out how to photograph the darkest sections of the caves (flash pictures never work right at all). For now I offer the dimly lit sections...

I don't know of a great many other talus caves. When I was quite young I remember exploring the "Indian Caves" on the north side of Yosemite Valley, but their existence is no longer emphasized by the park service (I suspect that animal life in the cave was being severely impacted by visitation and garbage strewing). I also spent some time exploring Elsie's Cave in the Big Bear Lake area of Southern California. Beyond that, zilch. Does anyone have some stories of interesting talus caves in your region?
Posted by Garry Hayes at 5:18 PM

To take pictures in caves, use a tripod, and bracket your exposure, so you're sure of getting at least one good shot.

For the caves at Pinnacles, I imagine that in many areas you'll find extreme contrast -- dark shadows and bright rays of sunshine coming through between the rocks.

Then you use Photoshop (or a similar program) to merge the three (or five) pictures together.

I've tried this technique, but I haven't perfected it. I always forget my tripod, or forget to use it.