The Abandoned Lands...A Journey Through the Colorado Plateau: The Rise and Fall of Empires, Part 3 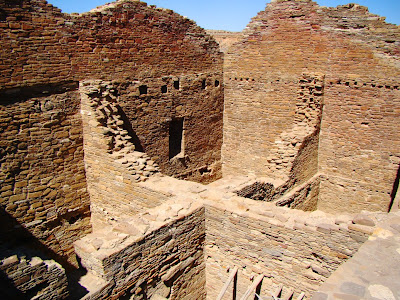 We've been following a route through the Colorado Plateau through what I've been calling the Abandoned Lands. It is a journey through some spectacular geology, but it is a journey that reveals some illuminating anthropology as well. We started at the end of a long journey of a people as they found homes along the Rio Grande River and its tributaries (Acoma and Taos), and then explored the dwellings that formed the midpoint of their migration ( Bandelier National Monument). In the last post of the series we had reached their starting point, at Chaco Canyon in northwest New Mexico.

For three hundred years, Chaco Canyon was the spiritual and economic center of the Ancestral Pueblo Universe. And then it was abandoned. Not with an ultimate battle against more powerful invaders, but with a whimper, a decline that took a number of years. Buildings weren't burned down (for the most part), but were cleaned out and sometimes sealed. It was an abandonment driven by the inability of the land to provide enough in the way of basic needs: water, crops and lumber. 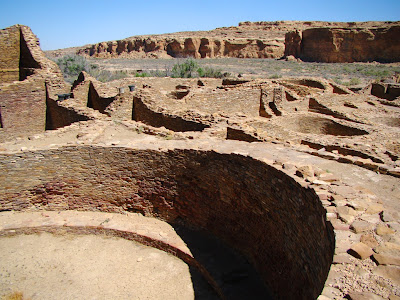 There was little timber in the region to start with, but they used vast amounts of conifer trees that had been hauled fifty miles or more. As the pueblos grew and the need for wood increased, the Ancestral Puebloans constructed roads to facilitate the importation from distant forests.
The region probably never allowed for much in the way of agricultural production. In the desert climate, crops were always a marginal proposition. The people of Chaco imported maize from far-flung locations over distances of twenty or thirty miles.
Water was  also a challenge. There were no permanent rivers, and few springs. The problem was made worse by poor treatment of the soils which led to gully development that lowered the area's water table. Crops could be imported and so could wood. Water was another matter.
A fifty year drought began around 1130 AD. It was the beginning of the end. Some of the outlying villages were abandoned first, and as the drought deepened, the main Great Houses were left behind as well. The area became the domain of ghosts and lost spirits (if your imagination is imaginative enough to hear their whispers).

What can we learn? Probably not that much. I mostly think about metropolitan centers like Las Vegas and Phoenix which are totally dependent on the importation of water over distances of hundreds of miles. They depend on energy and food imports from hundreds or even thousands of miles away. We can say that modern technology will continue to support the resource needs of millions of people, but what happens when the petroleum stocks start to run low (despite high prices, worldwide production of oil has remained flat for 6-7 years). And we are in the midst of a disturbing drought that climate scientists think will be the norm for decades to come. Are we thinking about the kinds of choices that must be made? 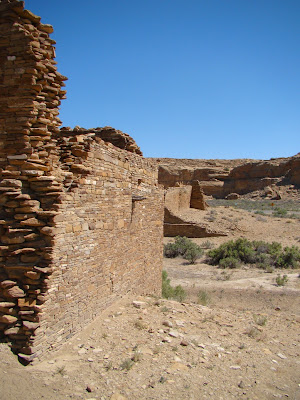 In the last post we explored Pueblo Bonito, one of the most completely excavated ruins at Chaco. The pictures today are from Pueblo del Arroyo and Casa Rinconada, which have large sections still buried beneath the sand. Modern archaeology recognizes that methods of analysis will improve in future years, and as such we need to leave some of the sites undisturbed. It also provides to visitors like myself a sense of mystery. What still lies hidden???
An empire ended...
Posted by Garry Hayes at 1:24 AM