The Abandoned Lands...A Journey Through the Colorado Plateau: In death and the end of all things, there is beauty?

Living in harmony with nature...

One sometimes hears such statements about some pastoral time when humans lived off the land, living in peace with their neighbors, and as such there was this Eden-like quality to existence. A moment's thought will probably lead one to realize that such situations in the human sojourn on this planet have been exceedingly rare.

At the most cynical level, living in harmony with nature means that a society or culture is living within the strict constraints of resources, imposed by marginal agricultural lands or limited water sources. If the population grows too much, starvation ensues, and harmony is restored only when part of the population dies off. Very Malthusian....

We were continuing with our journey through the Abandoned Lands, the world of the Colorado Plateau. In the last post, we were taking stock of the landscape that surrounds the famous cliff dwellings of Mesa Verde National Park.
In a sense, the Ancestral Pueblo people did live a rather harmonious existence at Mesa Verde. The available evidence suggests that people lived on the flat divides of the mesa for more than 600 years with little violence or warfare. How many parts of the world can claim such a record?

That isn't to say that life was in any way easy. In some ways life was brutal and short; the average lifespan was less than thirty years, and elders who reached their fifties were rare. Many burials show evidence of disease, and the gritty corn meal wore teeth away at a horrific rate. Women often died in childbirth.
And then there are the incredible stone cities that lie in the alcoves of Cliff House Sandstone that made Mesa Verde so famous. They are so striking in their architectural grace that one can look at them and sense that the Ancestral Puebloans had reached the pinnacle of their technological development when they built these dwellings. The truth is, as always, complicated.
They didn't live in these cities for very long...

Most of them were constructed at the beginning of the 1200s and they were mostly abandoned before 1300. For more than 600 years, the Ancestral Puebloans were content to live in small villages and family pithouses on the mesa tops. The alcoves containing the stone cities were cold and drafty in winter, they were practically inaccessible, and often far from water sources (a few alcoves had springs that emerged in the rear). For all their architectural grandeur, they were not comfortable places to live.
One could just as easily ask why Europeans built unassailable castles. They didn't want to be assailed. The stone cities of Mesa Verde, plain and simple, were fortresses. Despite their beauty, the cliff dwellings were the harbingers of the end of human occupation of Mesa Verde, an omen that foretold the abandonment of a place that a people called home for 600 mostly peaceful years.
What went wrong? Anthropologists are not in complete agreement. But something they do agree on is that the archaeological record shows more evidence of violence and warfare at this time than in any comparable period in Ancestral Puebloan history. Some of the dwellings contained butchered bodies that were never given burials. The pathology was obvious: their skulls were bashed in and the structures purposely burned. I wrote of the tragedy of one of these villages, Castle Rock Pueblo, which can be found west of Mesa Verde. The villagers came to a sudden violent end about 1280, and the pueblo was never again occupied.
What events transpired that led a culture to live in fear for upwards of a century? What precipitated their final abandonment of the entire region? There have been stories of invaders from the north, but archaeological evidence for outside intervention is sparse at best. Was the violence fratricidal? There were intense multi-decade droughts that could have brought about crop failures and soil loss from erosion. Food stores may have run short. Faced with starvation, what would you do? 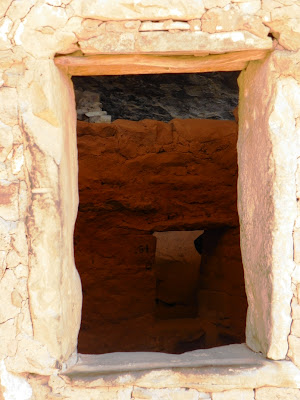 There is mystery about the reasons for the disappearance of the Ancestral Pueblo people, but there is no mystery about where they ended up. We have been exploring the lands of their descendants on this blog journey, at the pueblos along the Rio Grande River, and at the Hopi mesas. They have weathered many turbulent events and upheavals, but have persisted in this hard landscape when many others gave up.

As I pointed out in the previous post, this was a most extraordinary day: I left my camera in camp. All of these wonderful photographs are courtesy of my own Mrs. Geotripper.
Posted by Garry Hayes at 11:16 PM