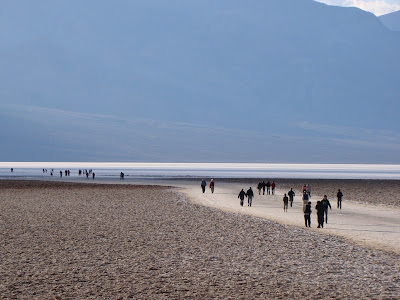 The concept of "retroactive retirement" became an amusing issue in the presidential campaign as a way of a particular politician escaping from an unpopular position by more or less going back in time to say he had retired when it looked like he hadn't (see the New Yorker response here). I came across an interesting abstract that outlines how meteorological researchers have retroactively declared Death Valley National Park as the hottest place in the world, based on an observation in 1913 when the temperature reached 56.7 degrees Celsius (134 degrees Fahrenheit). The story was picked up by NBC news where I first came across the information.

The gist of the argument is that the meteorologists have doubts about the circumstances of the measurement in Libya: an obsolete thermometer, inexperienced observer and improper positioning of the apparatus (apparently over asphalt). Nearby areas did not record corresponding record temperatures. So the record reverts to the 1913 reading at Death Valley.

It's an interesting convergence of records, because Death Valley made the news this year for another meteorological world record: the highest overnight temperature ever recorded on Earth. On July 12 of this year the low temperature at Death Valley, California dropped to only 107°F (41.7°C).  Because the daytime high was128° (53.3°C), the average temperature of 117.5°F made that day the warmest 24-hour temperature on record. Ever. 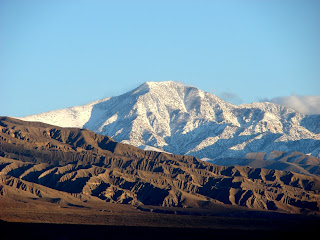 And that, my friends, is why I visit Death Valley in February.

PS: Jeff Master was on this story first today
Posted by Garry Hayes at 5:02 PM

Any ideas why the temperature dropped so little? Usually, in deserts, the dry air allows more heat to escape, and the night time low is quite a bit lower than the daytime high.

Yow. A cool low of 107. Nuts. The one time I went there was not on purpose, but finally couldn't resist all the turn off signs saying Death Valley. It was July. Not a genius plan.

When my husband scooped me out of the park insisting I was overheated (oh, I'm fine, I just need to sit down...) we returned to the air conditioned hotel room (HEAVEN) and I turned on the cold water tap to get some cool water to drink. And waited for the water to get cool. And waited. It never happened. Sign that people/I don't belong there. Eek! And that we must return in Feb . =)