The Abandoned Lands...A Journey Through the Colorado Plateau: The fusion of geology and architecture, part 1 (and a gratuitous lizard photo).

OK, the lizard was an attention getting device...what I really want to talk about is the stunning beauty that resulted when the Ancestral Pueblo people built their homes in total harmony with the landscape they inhabited. Two places really stand out in my experiences, Hovenweep National Monument on the Utah-Colorado border, and a canyon on Cedar Mesa a bit further west in Utah.

In so many places where humans live, their houses and other buildings are imposed on the landscape regardless of appearance or topography. If the land doesn't conform to the builder's desire, the land gets changed, bulldozed, straightened and groomed. When I first arrived at Hovenweep National Monument and gazed at the structures of the Ancestral Puebloan people, I was struck by how the buildings conformed to the rock. 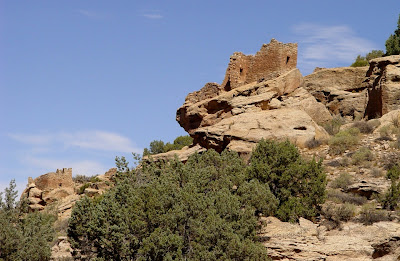 There is little to be seen of the full extent of the habitations that must have existed here, as many of them remain unexcavated and hidden by sagebrush and debris. Built the most unique structures line the rim of the canyon below the visitor center. It feels like the dwellings and towers grew out of the rock itself. Many of the structures were constructed on top of huge fallen boulders and the buildings follow the contours of the rock. 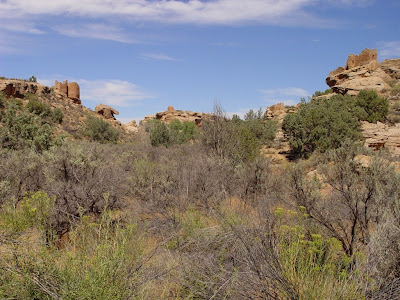 It is sometimes hard to discern the function of some of the buildings, with the strange placement of doorways and windows. Towers would seem to be used for observation posts, but some of the towers were constructed in the canyon where nothing in particular could be viewed. 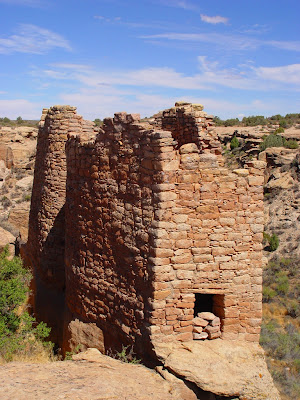 Looking across the canyon the twin tower command one's attention, but upon closer inspection, one realizes there is another dwelling inside the big boulder on the right. 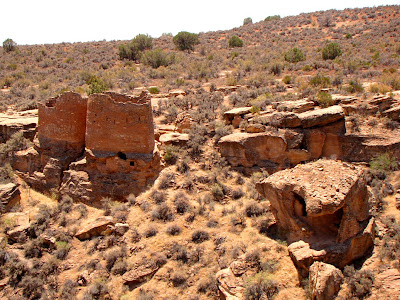 There are several rooms in the boulder, and the debris on the top of the boulder suggests there was once a structure on top. I don't really want to be flippant, but I look at these dwellings and I almost imagine Dr. Suess characters living here. Whatever the reasons were for the construction of these wonderful buildings, I have to appreciate the creativity that they represent. 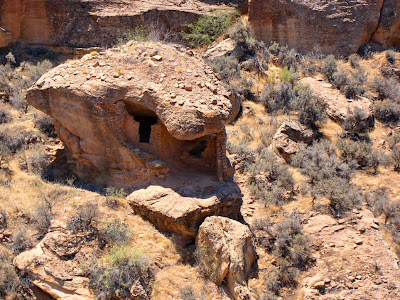 In the next post, I will be getting into the Wayback Machine (does anyone recall that allusion?). It's been a decade or so since I took a walk through a magical canyon on the western edge of the "fertile crescent" of the Ancestral Pueblo people on Cedar Mesa, and discovered a near total fusion of human habitation and rock. It wasn't part of our trip last summer, but it seems to fit the theme of the moment.
Posted by Garry Hayes at 12:56 AM

The second picture (after the lizard) shows a building whose floor seems to be tilted at a pretty steep angle. I would find that very uncomfortable to actually live in!

Oh, and the "prove you're not a robot" section below has a picture of something that's not a letter or number. Hopefully my comment will still get posted!