The Abandoned Lands...A Journey Through the Colorado Plateau: 700 years in the Fertile Cresent

It's been a bit of time since we checked in on our journey through the Abandoned Lands, my theme for our summer field studies in the geology and archaeology of the Colorado Plateau. In the previous post of the series we were looking into the abandonment of Chaco Canyon after 300 years of cultural dominance. The reasons may have been meteorological and geological: the land was worn out and droughts had intensified by 1150 AD. On this day, we had traveled a hundred miles north to Durango, and over a series of foothills of the San Juan Mountains to arrive at Mesa Verde National Park. It was our first look at the 'fertile crescent' of the Ancestral Pueblo people. And a place that held out more than a century after the influence of Chaco Canyon had faded away. 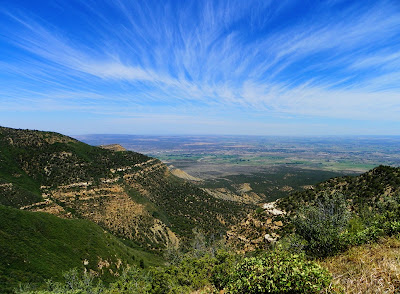 World history taught us about a different fertile crescent, the one that spawned human civilization in the Middle East. In the case of the Colorado Plateau, it was a landscape that supported humans for 700 years or more, before being abandoned in the late 1200s. The land lying between Mesa Verde on the east and Cedar Mesa to the west was the sweet spot for agricultural development: it was a critical thousand or feet higher than the hot dry desert around Chaco Canyon, but it was not so high as to be buried by snow for too much of the year. The lands between Cortez, Colorado and Blanding, Utah were covered by the Dakota Sandstone and an overlying weathering unit called the Dove Creek Soil. It was ideal for growing corn and beans centuries ago, and continues to produce pinto beans today. 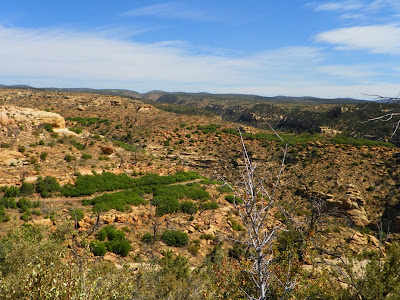 We are in one of our nation's premier national parks, famous for the spectacular cliff dwellings, but today's post doesn't have any pictures of them. Instead, I am showcasing the land on which the Ancestral Pueblo people lived. And what could be more boring, really? The plateau of the "Green Mesa" is mostly a gently-sloping pinyon-juniper woodland that has been scarred by a series of disastrous wildfires in the last few years. In a bizarre kind of way, it reminded me of home, back in the Central Valley of California. But this barren burned landscape probably looks more like the ancestral landscape of the Pueblo people right now than it has in hundreds of years. Why? Because this barren surface was their farmland, cleared of trees and shrubs in favor of corn and beans. For 600 of their 700 years on this mesa, it was the location of their village sites as well. The famous cliff dwellings of Mesa Verde were occupied for barely a century! 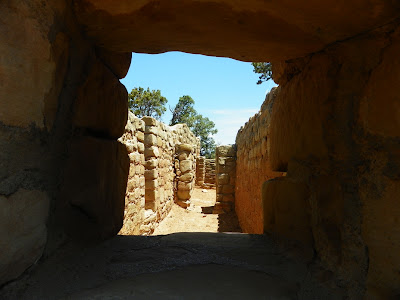 Mesa Verde has something like 5,000 archaeological sites, and yet only a dozen or so cliff dwellings are the objective of the majority of visitors. The older mesa-top structures garner a great deal less attention by visitors in a hurry, but they are a fascinating record of an occupation that lasted three times as long as the United States has existed. The pit houses, small villages, and the Sun Temple are interesting and more intimate places to visit than many of the cliff houses which often can only be seen from across canyons. There is even a reservoir and terraces that were constructed to expand arable farmlands. 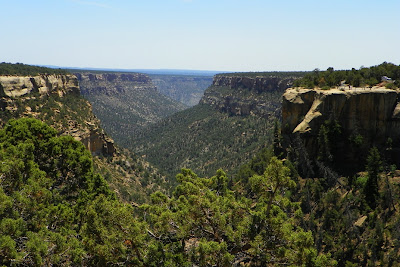 The canyons are for the most part dangerously inaccessible, and I imagine they were utilized mostly as a source of water. Until that last century, that is. Then the inaccessible alcoves became home. Which leaves us with the big questions: why did the Ancestral Pueblo move into these dangerous canyons, and why did they abandon this land only a century later?

A programming note: Our exploration of Mesa Verde had one little quirk that I don't think has ever happened in all my journeys in the digital age...I left my camera sitting in my tent back at camp! These pictures were kindly provided by Mrs. Geotripper.
Posted by Garry Hayes at 12:38 AM

Man, I wish I had all my notes from your class >.< Now I"m taking a volcano class and can't remember anything from geo

It really is too bad the mesa top pueblos don't get more attention.

So many questions not answered. Thanks for sharing these great photos and writings about the Ancestral Pueblo peoples, Garry.