Strangers in a Strange Land; or maybe the opposite

Which of the two pictures below is more strange? Which has creatures that are more out of place? 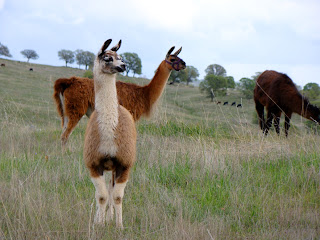 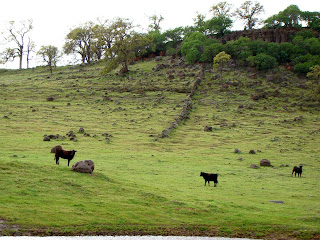 I know that my series on Strangers in a Strange Land has been about Death Valley and the Mojave National Preserve, but the title seems appropriate here as well. We were chasing a storm eastward into the Sierra Nevada foothills to see whether the flowers were making a spring appearance. There weren't too many just yet. The storms this week dropped nearly three inches of rain in our area, which may not sound like much, but it is a quarter of our yearly average, and yet it only gets us to about 60% of normal. It's been a pretty bad drought, in other words.

We were driving past a ranch in the foothills, and the grazing animals looked out of place. We stopped for a closer look and realized that there were llamas out in the field. Llamas! What could be a stranger sight in the grassy foothills of the Sierra Nevada? 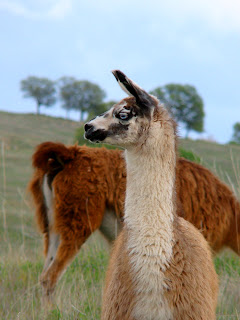 When we think of grazing animals in this region, we mainly think of cows. But from a geological point of view, the llamas make a great deal more sense. Why? Because they are camelids. That doesn't seem to make any more sense, since most people know that camels are only found in the Middle East and Africa. But the llamas and the camels should feel perfectly at home in California and the rest of the North American continent. Their evolutionary heritage is right here. 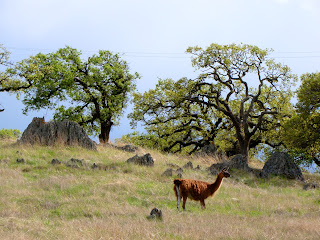 The first camels evolved here around 45 million years ago, and dozens of species evolved in the wide grasslands across North America. Some groups moved into Asia a few million years ago over the Bering Land Strait. Two or three million years ago other groups crossed over the newly formed Isthmus of Panama when North and South America became connected. Their story parallels the evolutionary history of the horses, who also traveled both directions out of North America.
They continued to thrive in North America until just 11,000 or 12,000 years ago when the camelids and the horses and a host of other large species went extinct. The reasons may be related to climate changes or to overhunting by recently arrived humans, or some other unknown agent, but they disappeared.

The cows that graze our grasslands today arrived much more recently with European settlers, but they evolved in Europe and Asia. They are the true strangers in our strange land.

The llamas are grazing over the graveyards of their distant ancestors.

Postscript: If you want to know more about the camels that are being excavated in the Central Valley, check out the Fossil Discovery Center in Madera County

Seeing lamas out there seems much more natural than cattle.

Hope that rain helps you out. We currently have 8" of snow.

Rather easier on the local ecology, too.