A Priceless Collection of Minerals: To see, or not to see 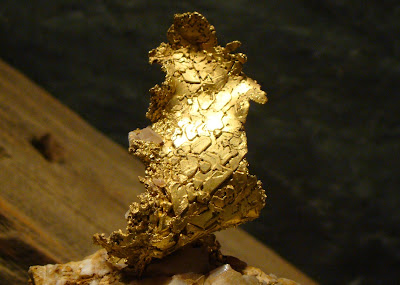 I was in the field yesterday with my students, and one of our stops was at the California State Mining and Mineral Museum in Mariposa at the south end of the California Mother Lode. I am offering up a selection of photos of some of the finest mineral specimens you will ever see anywhere, but I hope you will read to the end of this post as you look at them. Enjoy!

The first few images are some of the striking specimens of crystalline gold. Gold crystallizes in the isometric crystal system (three equal axes at ninety degrees), but the crystals themselves are rarely seen because gold is so malleable that the structure is lost the moment the mineral rolls in a stream. 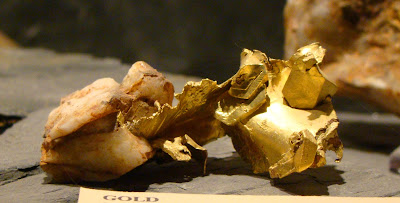 Gold crystals, then, instead of gold nuggets. They are just gorgeous, and priceless, because the vast majority of crystal specimens were melted into bullion along with all the other gold during the gold rush days, even the biggest single nugget, one that weighed close to 200 pounds. 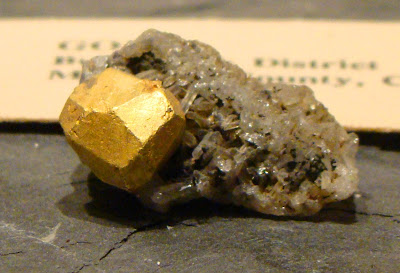 You just don't expect gold to look like this. 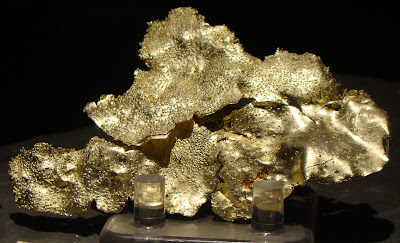 Or this...when the Harvard open-pit mine was operating in the 1980's and was about to close down, the miners hit a rich pocket. Mine employees who had hardly ever seen even a small bit of gold in the disseminated ores were surprised to see a 60 pound chunk of gold pass by on the conveyor belt. It was composes of leaf gold, a crystalline variety composed of...um...leaf-like flakes of gold. The entire mass was preserved and can be seen at the Ironstone Winery at Murphys, but a large flake can be seen above.

And then there is the Fricot Nugget. The 13.6 pound nugget is the largest single gold mass preserved from the Gold Rush Days, having been discovered in 1865. It lay a long time in a safe deposit box, almost completely forgotten. It came to the state collection in 1943. 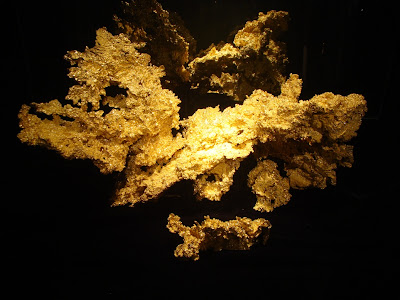 An exceedingly rare mineral is a beautiful blue sapphire-like gem called benitoite. It is found at a single mine in the California Coast Ranges. It was designated the California state gemstone in 1985. 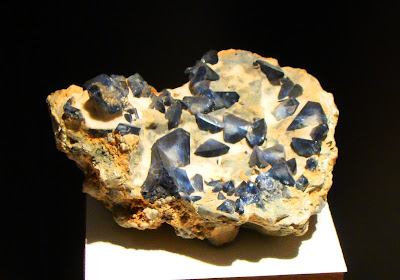 The sample below includes two very rare minerals. The black mineral is neptunite, which is often found in association with the benitoite. 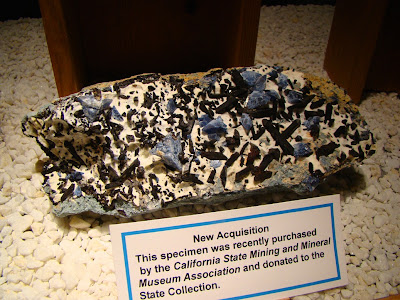 Another unique mineral assemblage in California comes from the pegmatite veins in San Diego and Riverside counties. These veins contain immense crystals of quartz, feldspar, muscovite mica, and a group of rare gemstones, most notably tourmaline. For a time in the early 1920's tourmaline was the most prized gem in China, and many incredible crystals were exported. 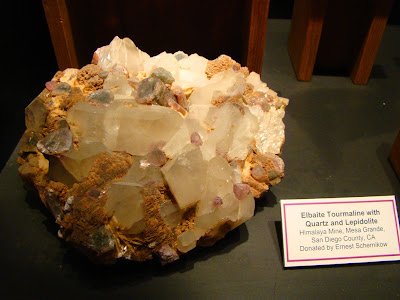 Other minerals came to the state from all over the world. Below is a striking example of beryl (aquamarine), a relative of emerald. 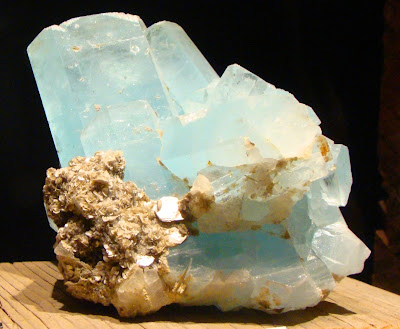 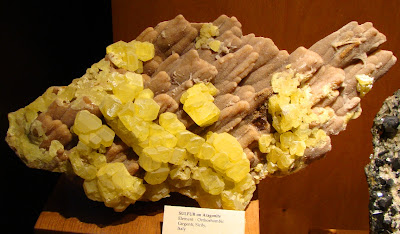 And some beautiful crystallized azurite and malachite, ores of copper. 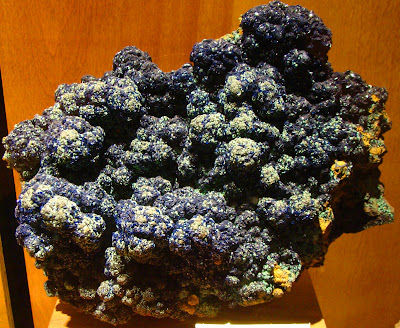 And opal from the Virgin Valley in Nevada... 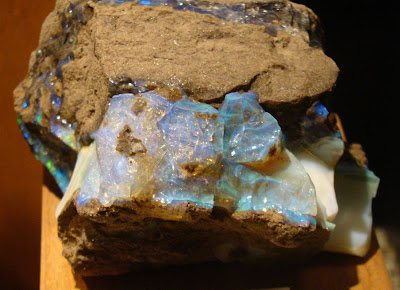 Another example of pegmatite contains a form of feldspar called amazonite. 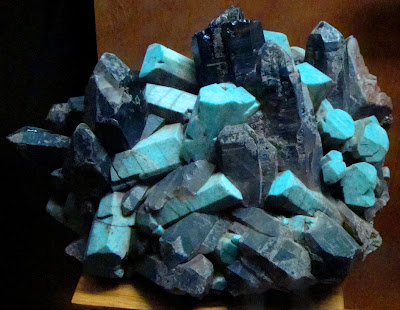 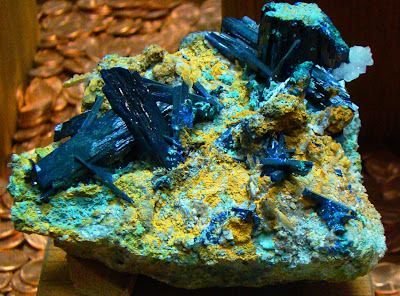 The crystals below are wulfenite, an important ore of molybdenum and lead. 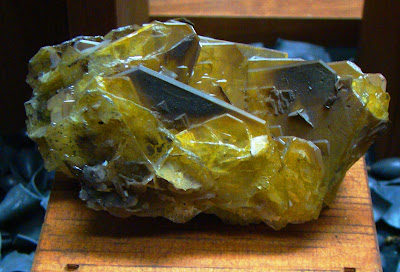 And finally, the museum has an excellent exhibit of meteorite specimens, including this cross-section of the crystallized elemental iron of the Giant Goose Meteorite, which fell in Modoc County in 1938. The original weighed over a ton. 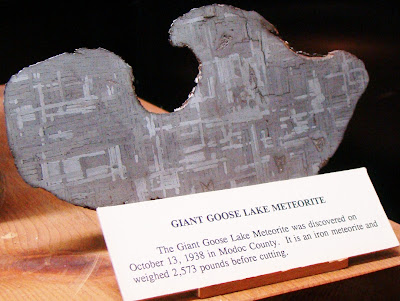 Wouldn't you just love to see these incredible rare specimens for themselves? I can assure you that it is a great exhibit, quite worthy of a short diversion on your way to Yosemite National Park. But you don't get to see them. You may never get to see them ever again. Why? Because the California State Mining and Mineral Museum is on the state closure list, one of 70 parks to be closed and shuttered because of cuts of $22 million to the state park system, approximately 70 pennies for each inhabitant of the state. I am incensed that the people of our state legislature are so incredibly short-sighted as to allow this to happen.
I feel hopeless sometimes at the stupidity I see. State parks generate economic activity, they don't drain it. Closing these parks makes no sense at all. Mitchell Caverns has already closed, and vandals have already done grievous damage. It will cost so much more to re-open these parks once they have been degraded. And yet that is what our government has decided to do, come June. I don't quite know what would work to change this, but one can start by letting your legislators know how you feel about this. The parks have few friends in the legislature obviously, but the politicos might listen to someone besides their ever-present lobbyists if they heard from their constituents. Who knows? There is a facebook page for the California State Mines and Mineral Museum, and there is the California State Parks Foundation, the best place to get information on how to proceed politically.
I know that blogs are places for the writing of many words, but I have few enough words that can express my disgust at the members of the state legislature and government for allowing this to happen.
Posted by Garry Hayes at 11:21 PM

Must be somebody's personal agenda, maybe to privatize these parks. Such a loss for the public.

These specimens are awesome. Maybe selling one of them would keep the park open.

I strongly suspect that the damage done at Mitchell Caverns was greater than the cost to keep a ranger on duty, and the park open.

It is a classic case of "penny wise, pound foolish."

Another example: The way to get out of a recession is to educate (or re-educate) people, and then put them back to work. And yet schools in California from pre-K to graduate programs at UC have seen budgets slashed to the bone, and beyond.

So please follow Garry's advice -- contact your elected representatives, and remind them that they represent US, not the 1%!