A Half Dome Day in the Central Valley 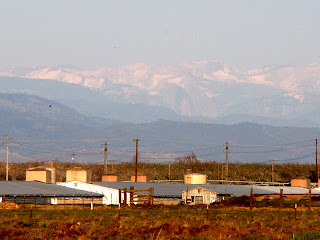 We don't get many of them. One might think that living a mere five miles or so from the Sierra Nevada foothills that the range would be an awesome backdrop to the valley floor, in the way of the Rocky Mountains and Denver, or the Sandia Mountains behind Albuquerque. But it is not at all like that.

The Sierra Nevada in structure is essentially a huge tilted block of granite and metamorphic rocks about 400 miles long and 40-50 miles wide. The gentle slope is on the west side, so the high crest (which reaches 12,000-14,000 feet in elevation) is around 50 miles away as the crow flies from where I live.

An additional problem is air quality. Our fair valley (we actually call it the Great Valley) is completely surrounded by mountains, so the air is usually trapped and pollutants build up ominously. Dust, smoke, pesticides and fertilizers build up from agricultural activity, and industrial smog blows in from the Bay Area. Many of our cities, especially Bakersfield and Fresno, are among the most polluted in the nation.

Seeing Half Dome is especially tricky. It lies at the upper end of Yosemite Valley about two thirds of the way to the Sierra Crest. Although it rises 4,000 feet above the valley floor, it only barely peeks above the other cliffs of the valley. And there are high ridges between the dome and valley making a line of sight impossible.

But...there is a V-shaped notch made by the Merced River canyon that allows Half Dome to be seen from a narrow sliver of land cutting across the towns of Denair and Turlock. I drive past a spot near Keyes Road east of Turlock every Wednesday on the way to class, and if the winds have cleared out the smog, and I've remembered my camera, I can capture the huge mass of rock digitally. You have to know where to look, and you have to use a pretty powerful zoom, but it is there, along with Cloud's Rest. 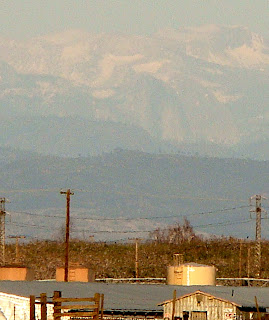 I cropped the center of the picture above to highlight Half Dome, but it is still a little faint, so here are some outlines below to make it clearer, I hope. 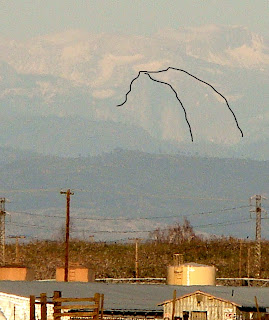 People have remarked that the pictures are fakes, and I can't say much to that other than I wouldn't know how. Others have remarked how out of proportion Half Dome looks. I realize while looking at the picture that Half Dome is essentially a 4,000 foot cliff. That's a third of the height of the entire range. It really is huge.

Enjoy. For my local readers, if you want to see this view, it is about a third of mile south of the intersection of Keyes Road and Hickman Road east of Turlock
Posted by Garry Hayes at 6:52 PM

Labels: Half Dome from the Central Valley, Sierra Nevada

That is so awesome. It seems like you could almost see Vernal Falls too.

Clicking on the first shot seems to give a slightly clearer image.
Nice!

wow that is amazing! I will keep an eye out next time I drive that way.

That. is. amazing. And I had NO idea it was a possibility.

I've been in Fresno a few days post-rain when it's SUPER clear, and w/the view of the Sierra Nevada I understood why someone would have settled that area.

I MUST write those directions down. THANKS!!