Strangers in a Strange Land: Not finding what you're not looking for... 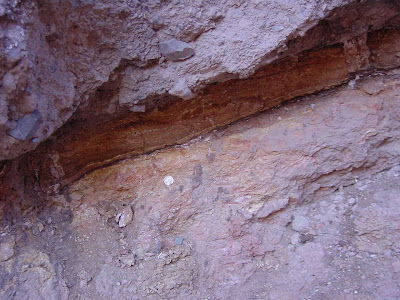 Perception is a funny thing. Our preconceived biases exert a powerful influence on our interpretation of our observations. We understand what we know, and we can't really conceive of that which we don't know. Maybe Donald Rumsfeld was onto something when he famously said "There are known knowns. These are things we know that we know. There are known unknowns. That is to say, there are things that we know we don't know. But there are also unknown unknowns. There are things we don't know we don't know." Maybe he was expressing a deep philosophical truth. Or maybe he was a prevaricating politician. But there is a truth revealed here that applies to science, and geology in particular. We are very good at not finding what we are not looking for.

Charles Walcott, a respected paleontologist, discovered the incredible Burgess Shale fossil assemblage in 1909. Although he collected tens of thousands of specimens of exquisitely preserved creatures from the Cambrian period, he didn't completely realize their full potential as a window into the evolution of the earliest complex life forms. He tended to shoehorn odd specimens into known phyla and classes without exploring the possibility that these animals could be entirely different organisms from phyla that are long extinct.

Often scientists will see something new, and despite their insight, they don't fully follow through. Alfred Wegener was a geological visionary who collected extensive evidence that the continents of the world had once been collected together in a huge supercontinent that he called "Urkontinent" (German word meaning "origin of the continents"). The story is told in all geology classes about how his ideas were not at first accepted by the geological community (there were some good reasons for the geologists to be skeptical, and but other objections were rather unfair). What strikes me is a rarely noted factoid: he thought of Pangea (Urkontinent) as the starting point, that continents began as a single landmass. I may be wrong about this (and I am open to correction), but he seems to never have realized that Pangea may have been constructed from the collision of earlier continents. Yet he used mountain ranges that seem to cross from one continent to another (such as the Appalachian Mountains in the U.S. and similar mountains in Scotland and Scandinavia) as his evidence for the existence of Pangea. Mountains like these were the suture zones where older continental fragments collided and melded together. There may have been as many as four "urkontinents" in the last two billion years! Would a fuller understanding of these earlier landmasses changed Wegener's approach to dealing with his hypothesis? It's impossible to say. He died in 1930 at the age of only 50.

Which brings us to Death Valley and our recent trip. Our "strangers in a strange land" had just learned at an earlier stop that there are four kinds of faults: normal, reverse, right lateral and left lateral. Low angle reverse faults, thrusts, are well-known from pioneering studies in the Alps and Appalachian Mountains. This was pretty much the status of fault classification in the 1940s when the first pioneering studies were being done in the Death Valley region.

Levi Noble was one of the first geologists to map the geology in Death Valley, and the project was daunting. He was up to the task, and his maps have stood the test of time. But some of his interpretations were colored by his expectation of finding the kinds of faults he had seen before. He knew that low angle faults were thrusts, because no one had seen anything different. And thrusts are caused by compression, which generally causes older rock to be pushed up and over younger rocks. Noble found plenty of thrust faults exposed in the mountains around Death Valley. 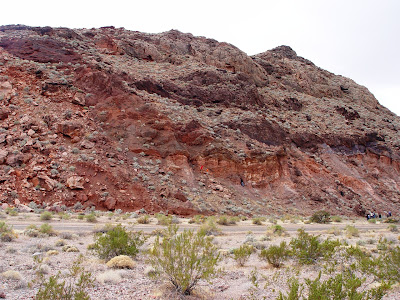 When he mapped in the Black Mountains on the east side of the valley, he found some real oddities. In some places, faults seemed to be everywhere, to the extent that the crust simply seemed to be chopped up into small bits that were only a few hundred feet across. Layers that were hundreds of feet thick elsewhere where only a few tens of feet in these outcrops, including the roadcut in the picture above, which has been called Exclamation Rock or Exclamation Point.  Noble called these unique sequences, somewhat logically, chaos. And underneath the chaos he mapped a low angle fault. It probably looked much like the fault seen in the picture at the top of this post. He called it, quite reasonably the Amargosa Thrust. But there was something odd about it. 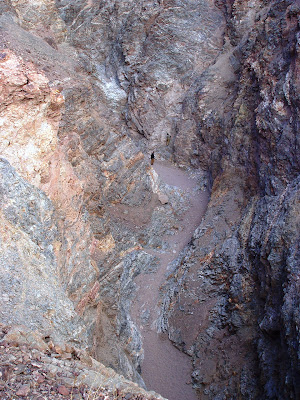 The person in the picture above is walking in a canyon that has been carved through one of the low angle faults like the one mapped by Noble. Above the fault plane is a sequence of Neogene volcanic rocks (a few million years old). The rocks in the gorge are Proterozoic gneiss and schist...more than a billion years old.

What's wrong with this picture??
Posted by Garry Hayes at 12:46 AM

Thrust faults usually duplicate stratigraphy, whereas normal faults are more prone to excise stratigraphy. The ages of the rocks on the opposite sides of this fault suggest that the latter type of fault should be responsible for missing strata.

[Not to discredit the story you're trying to tell, but I suspect Ellis Yochelson would have disputed your characterization of Walcott's contributions. I presume your understanding of Walcott is primarily shaped by Gould's _Wonderful Life_, no?]

What's "wrong"? there is a low angle fault ... but with younger rocks above rather than the usual older pushed over younger. So therefore not a thrust fault caused by compression?

He knew that low angle faults were thrusts, because no one had seen anything different. And thrusts are caused by compression, which generally causes older rock to be pushed up and over younger rocks.

By Levi's definition the rocks on top should have been older, but they are younger.