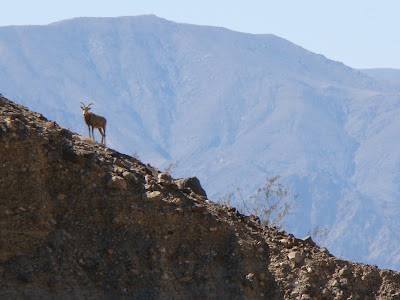 Strangers in a Strange Land is an exploration of the geology of Death Valley National Park and the Mojave National Preserve, as it might be seen (and possibly even understood) by a new student of geology. My trip turns out to have been in two parts, a five day journey over the President's holiday weekend with 30 students, and a second trip (just completed) to the Mojave National Preserve (with the National Association of Geoscience Teachers). Mrs. Geotripper and I made use of a spare day with a quick swing through Death Valley, exploring some of the places we've never seen with students.

I've been known to complain about being upstaged while lecturing by furry or scaly animals on my field trips. Really, would someone go to a park like Yosemite just to see deer or chipmunks??? Then again, something like this happens.... 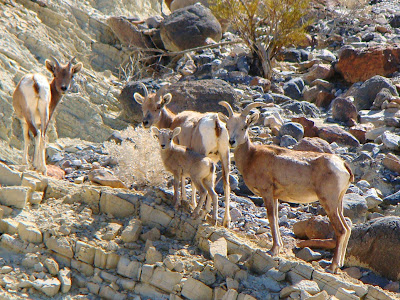 We were headed up a rather rough dirt track into a lesser known part of the park called Hole in the Wall (which will have a separate post of its own later on). We were surprised to see a herd of Desert Bighorn Sheep (Ovis canadensis nelsoni), six ewes and three lambs, grazing in the canyon along the road. I've been coming to Death Valley for more than twenty years, and this was the first time I had seen any here. That is partly a function of my short visits, but is also a consequence of big changes in the population of the sheep in the park.

Twenty years ago, one rarely saw bighorn sheep, but almost always saw feral burros, descendants of animals let loose by miners a century ago. The burros competed for forage and water sources, so the sheep declined in population (they also declined because of diseases introduced by domestic sheep). The park service instituted an effort to remove something like 3,000 burros, leaving a population of around 100. The bighorns have rebounded nicely. 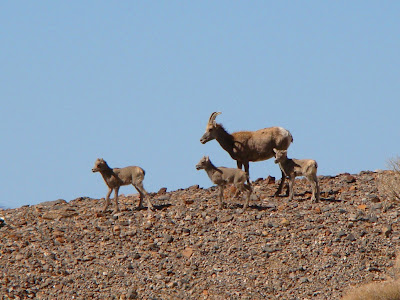 The sheep were cautious about our presence. They were grazing on both sides of the road we were following, and they moved away from us deliberately, but not in a panic. We drove slowly so as to not scare them. Eventually they moved up the hill a bit and waited until we left the area (having taken 30-40 photos of course). We went up the canyon for the next hour, and when we came back down, they were along the road again. 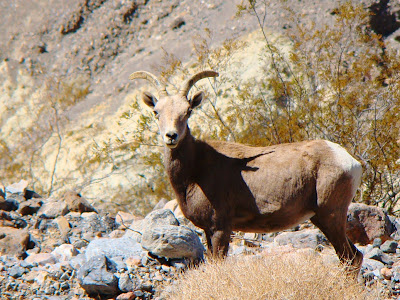 We stopped and decided to have lunch but stopped upstream of the herd, so as to bother them as little as possible. I saw one or two peeking around the corner down the canyon a few times. 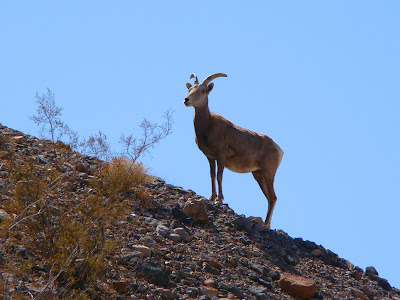 Eventually we had to leave so we got in the car and drove down the canyon. They watched us from above the road, but by now were not retreating. They just waited and looked down on us. It was a transforming moment for me. 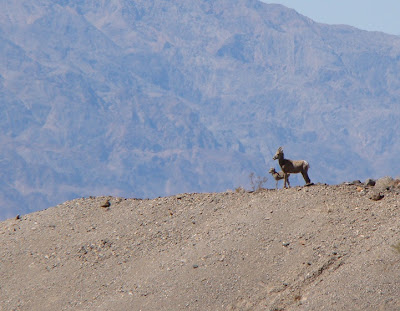 Bighorn sheep are an integral part of the desert landscape of the western United States. They appear in tens of thousands of petroglyphs, far more than other animals, and thus were an imprtant part of Native American culture. With the arrival of Europeans, both the Native Americans and the sheep became strangers in their own land. I was so glad to see that the bighorns were reclaiming at least a corner of their ancestral home. 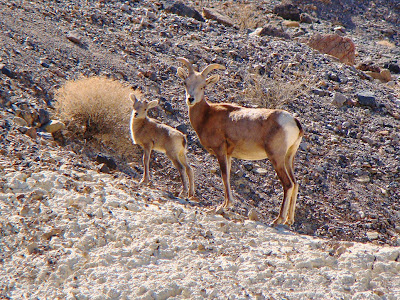 Awesome sightings of the Bighorns. Just read an article about one sighting in the Weaver Mts in my back yard. I hike there all the time so hope to see more. Nice to know they are returning to their historic landscapes like DEVA.

Ewe've got to be kidding. What a fortuitous and special encounter.

Aren't you glad you were there only with Mrs. Geotripper and NOT 30 students...I doubt they would have stayed around to "pose" with a huge group. Nice pics!!!