What a Difference a Week Makes: Fall Report from the Yosemite Valley 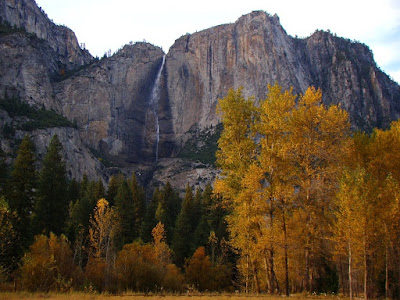 On a whim, we headed up to Yosemite Valley last Friday, searching for some fall color after a visit the previous weekend showed little evidence of the arrival of the autumn. The journey through the foothills gave us oak and alders turning, and the Big Oak Flat-Crane Flat road brought out the flaming red dogwoods. These beautiful turns in the road became just the opening acts as we found an overwhelmingly beautiful scene when we reached the valley floor. Water was still flowing in Yosemite Falls (above) after the rains of the previous week, providing a nice contrast with the alders in the meadow below. 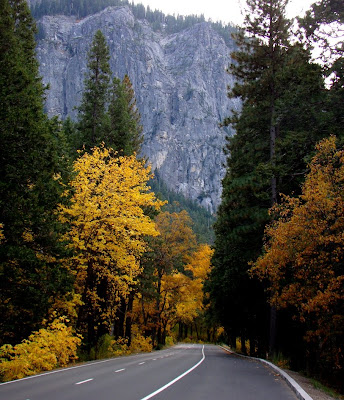 The road wound through an avenue of yellow trees, and in the breaks of the forest canopy we could see the Leaning Tower (below).... 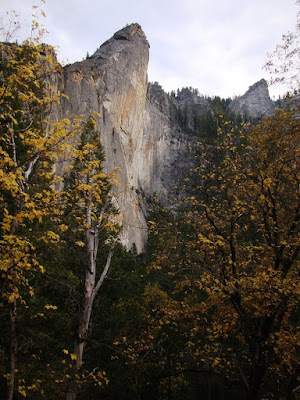 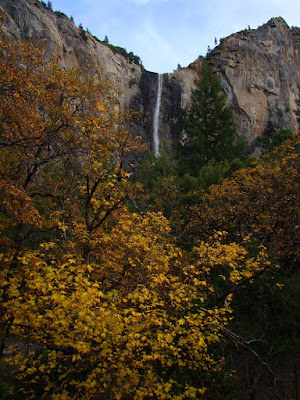 Knowing that the rivers were flowing again from the recent storms, we headed towards Mirror Lake at the upper end of valley. Mirror Lake kind of begs the definition of a "lake". If formed as a result a massive rockfall off the north cliff near Washington Column. A much larger lake persisted for centuries, but it slowly filled in with sand and gravel over the years. During spring runoff, Tenaya Creek ponds up, providing a reflective surface very popular with photographers. 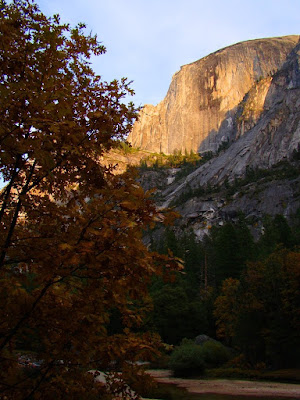 Half Dome looms high above Mirror Lake, so high that it is difficult to get the cliff and the reflection in a single picture. There was enough water in the creek Friday to catch reflections of the trees and Mt. Watkins, although the water was several feet below the level we've seen in springtime. 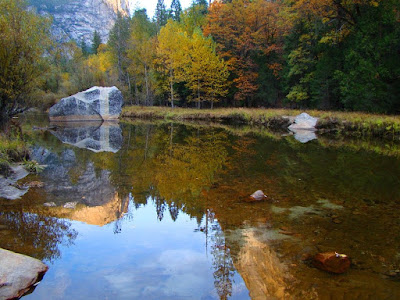 It was a beautiful place to watch the last rays of the sun... 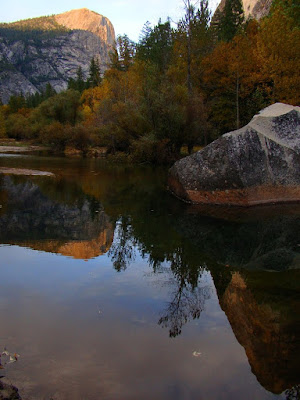 The previous week I saw a bear and a coyote, but not a single deer. This week there were plenty of deer, including one or two that wanted to introduce themselves to my bumper. Others were just doing deer things in the meadows, and I got one to pose for me... 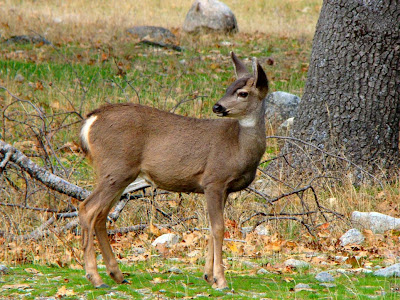 Then, it was time for dinner at the Mountain Room, and a stop to watch the stars at Gateway View, and a two hour drive home and back to the reality of grading. It was a wonderful day.
Posted by Garry Hayes at 2:05 PM

Wonderful photos of Yosemite, Garry. Thanks so much!

Awesome pics. I visited Yosemite this summer. Looks like I must go there in the fall.

This was a magnificent blog. I'm a gemologist and such rich pieces are so helpful in our world. Bravo Mr. Hayes!