What a Difference a Week Makes: Fall Report from the Sierra Nevada Foothills 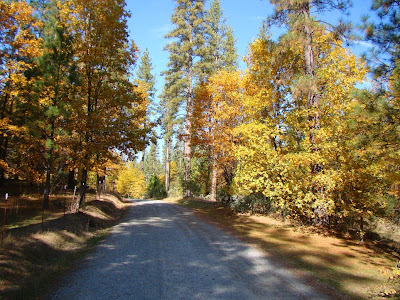 What a difference a week makes! Ten days ago we headed into the foothills looking for some fall colors and didn't see much, so I shot lichens instead. Last Saturday, I took students to Yosemite Valley, and there was merely a touch of color high on the cliffs. But we had a bit of a cold snap during the week, and it, uh, made a slight difference. We made a spur-of-the-moment journey to Yosemite Valley via the "John Muir Highway" and found a transformed landscape. 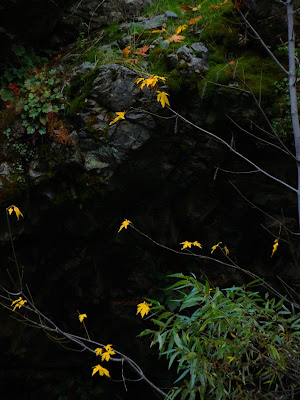 Aspens are the legendary fall color maker in many parts of the Sierra Nevada, but there are few aspens in the foothills and mid-elevation slopes of the western side of the Sierra. Instead there are many varieties of oak, sycamore and maple or birch (whose specific identities escape this biologically ignorant geologist). 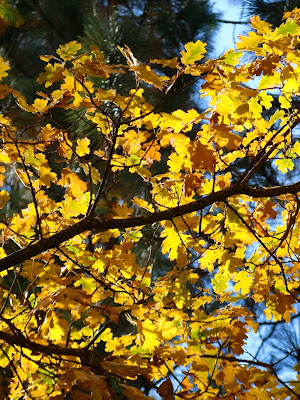 Also missing from the scene are outcrops of granite. In the foothills north of Mariposa, most of the bedrock is composed primarily of metamorphic rocks of the Foothills Terrane, the Calaveras Complex, or the Shoofly Complex. These are Paleozoic and Mesozoic slates, quartzites, marbles, and greenstones that formed out in the Pacific Ocean hundreds or thousands of miles away, and which were accreted to the edge of the continent as the ocean floor was subducted beneath the North American continent. 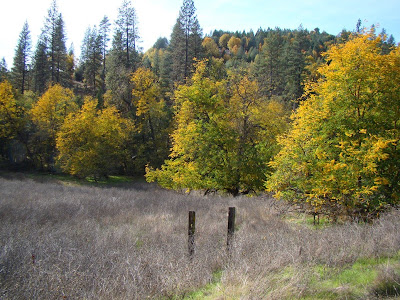 Glaciers did not reach the mid- and lower level slopes of the Sierra Nevada, so soils are thick and deeply weathered, most often to a bright red color from the iron oxide content of the original minerals. The soils are not particularly rich for agricultural purposes, having been leached of the most important nutrients by high rainfall amounts and the relatively warm climate. The trees do just fine, though. As a consequence, logging has been an important part of the economy here in the past. 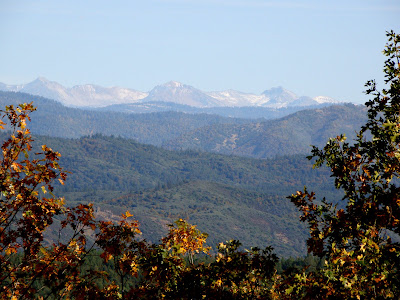 Highway 132 winds its way through Modesto to LaGrange, and then Coulterville. There is a long ignored alternative route to Yosemite that goes from Coulterville to Smith Station on Highway 120 which has garnered a bit more attention lately, having been designated as the "John Muir Highway" by local communities. I'm not sure how Muir would have felt having a road named after him, but it is a nice way to go. It's a bit winding and slower going, but provides some very nice views of some large meadows in the vicinity of Greeley Hill, and a panorama of the Clark Range in Yosemite National Park (above). 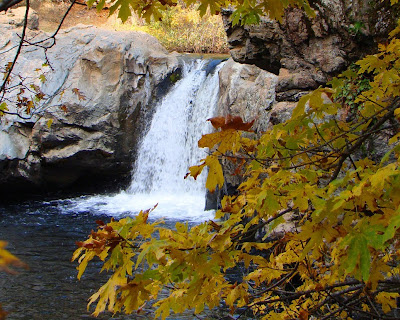 Once we were back on Highway 120, we stopped by Rainbow Pool, a popular swimming hole in summer. There is a deep pool and a short waterfall, along with some developments (parking lot, stairs and bathrooms) that make for easy access. There was no one there yesterday, just a beautiful stretch of river, and colorful foliage.
Posted by Garry Hayes at 10:41 AM

=) I hiked to Illilouette Fall yesterday and it was AMAzing! My goal was to get to the valley, and I did, but I spent so much time on that hike (heaven!) that I just did a cursory cruise and left. What I did notice was on the descent to the valley after turning right off of Glacier Point Road were the dogwoods. OH my. Glad you went, too!

The fall colors sure enhance the beauty found in Yosemite especially without the dramatic granite outcrops in competition. Great to see these weekly changes.