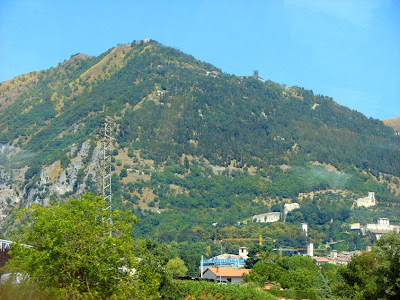 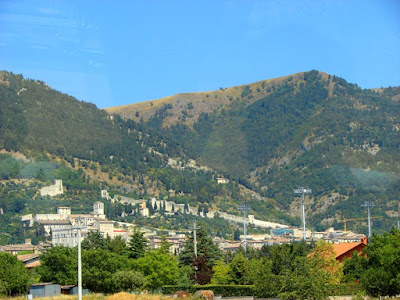 Tragedy this week in L'Aquila, Italy, when a 6.3 magnitude quake collapsed buildings and killed 235 people (at last report). Many in the geoblogosphere have commented about the tectonics of the quake (check here for the latest posts), and the seemingly odd juxtaposition of extensional quakes in an ostensibly compressional landscape associated with convergent boundaries.

I don't have much to add to the discussion, but I did want to share a few photos of another town in the Appennines in central Italy where the quake occurred. Gubbio is small medieval village tucked along the mountain flanks of the fault systems that slice northwest across the region. The valley is a prominent fault graben and provides a vivid example of the appearance of the many fault zones in the region.
In Roman times, the inhabitants of the region felt secure enough to live out on the valley plain, under the protection of the Roman Empire. When the empire crumbled, the cities became isolated and vulnerable to attack, so they moved the towns to a more defensible position at the base of the steep mountains. Walls and buildings were robustly constructed out of thick walls of mortar and rock. Unfortunately, little thought was given to the possibility of earthquakes, and many of the buildings (as we saw this week) are seismic death traps.
When a valley sinks along a fault system, a mountain block rises in a relative sense, forming a prominent ridge. Erosion produces deep gorges, and the original fault surface (the scarp) is shaped into a series of triangular facets , separated by wineglass canyons: alluvial fan (base of glass), deep mouth of gorge (the stem of the glass), and the open canyon above (the cup). These features are visible in the photos above. Unfortunately, Gubbio is threatened by the same kind of earthquake activity.
The top photo shows the triangular facet that forms the backdrop of Gubbio, while the second reveals part of the wineglass canyon formed by the erosion of the Bottaccioni Gorge. The pictures are a record of one of the great geologic days of my life: a visit to the Gubbio exposure of the clay layer where the Alvarez team made the discovery of the iridium anomaly that led to a new interpretation of the extinction of the dinosaurs and much of the other life on the planet at the K/T boundary. Unfortunately, I was trapped on a bus that was not under my control, and we didn't have time to stop for better composed pictures.
Posted by Garry Hayes at 11:25 PM

I recently enjoyed reading Walter Alverez's "Mountains of St Francis" that discussed the intriguing theories behind the plate tectonics of that region. Ironically, I finished the book about a week before this tragic earthquake. I now understand some of the reasons why this area is the center of such large earth movements.