Some Things Never Change...and Some Do 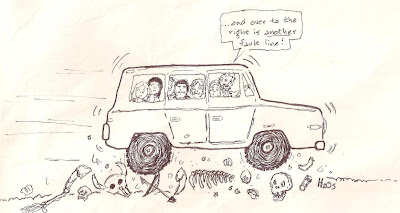 Digging through the old archives of two decades of teaching, I found the other "field note" from my very first field trip. I was leading students along a stretch of the San Andreas fault where it passes through Cajon Pass in southern California. Along the way we passed the Indian Hill fault, the Cucamonga fault, the San Jacinto fault, and finally the San Andreas. Looking at the 25 year-old comic, I was reminded once again that many people in our fair state don't really know the dynamics of the land they live on.

A common discussion in my class:

The professor: "All earthquakes in California happen on the San Andreas fault. True or false?"

The professor: "Very good! Name another fault in California."

Teachers of earth science have a daunting task: educating a public that is ignorant of the very real geologic hazards that surround them, in a time when a typical google search list is topped by Britney Spears and Obama's choice of dog.

One thing has certainly changed in two decades: television has made a difference. Cable channels like Discovery and National Geographic have in fact tapped into the very real curiousity people have about the world and geologic hazards that exist there. My students seem better informed about earthquakes and volcanoes and other topics than they used to be. It's a good thing, but there is a problem. But they also know more about sharks from "Shark Week" than they know about ocean ecosystems and the threat of over-fishing and ocean pollution. In other words, they know the flashy stuff, but their understanding of the underlying principles is still lacking. A television show cannot communicate that kind of deeper understanding. That's part of what we must do as teachers: adding the protein and vitamins to the empty calories of mass media presentations.

"That's part of what we must do as teachers: adding the protein and vitamins to the empty calories of mass media presentations." Nicely put. I don't remember exactly when I started getting frustrated with science "documentaries," but I know it reached a head when I was teaching. Trivia is not a terrible place to start, but it's most certainly not the place to stop. Adding to this problem is the increasing amount of nonsense being peddled as science: "Tune in for the astonishing new show 'Aliens caused the black plague,' next, on the History Channel!

I'm glad I do my teaching at national parks where people are usually interested in their surroundings, and also surprisingly knowledgeable.

At least science documentaries are a start and beat the other junk on TV. I'd rather see people get into the environment to learn than have to sit in a class room all the time.