The Ahwiyah Point Rockfall: the View I Wish I Had 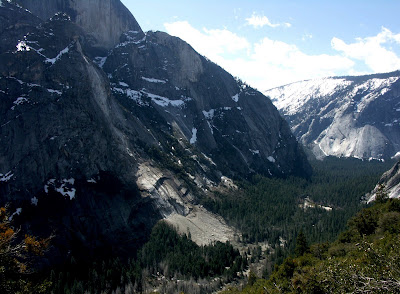 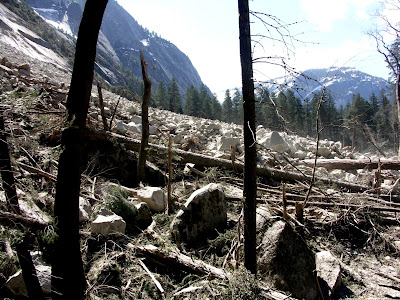 Photos courtesy of the National Park Service. Photographer: Greg Stock, Park Geologist
The National Park Service now estimates that the March 28 Ahwiyah Point Rockfall had a volume of 43,000 cubic meters, or 115,000 tons. This means that the event was almost 50 percent larger than the 1996 Happy Isles Fall (30,000 cubic meters), and is the largest event since the 1987 Middle Brothers slide (1.5 million tons). The airblast was reminiscent of the Happy Isles event.
These pictures, taken by Greg Stock, the park geologist, show the views I wish I had when I was there last weekend. The top photo is from the switchbacks to Snow Creek, and the other is obviously from the edge of the destruction zone.
For some strange reason, rock climbers have been inordinately interested in this event, and the effect it may have had on some of the Half Dome climbing routes. Via Geology.com, here is a comment string replete with photos from a number of climbers.
Posted by Garry Hayes at 3:58 PM

A great series of posts on this event, and that link to the climbers' thread is really interesting.