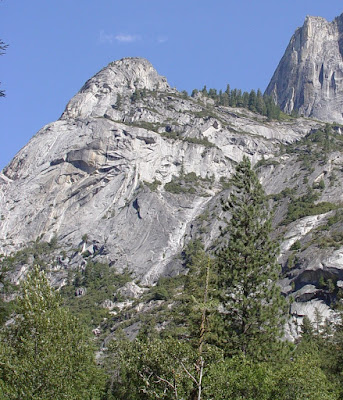 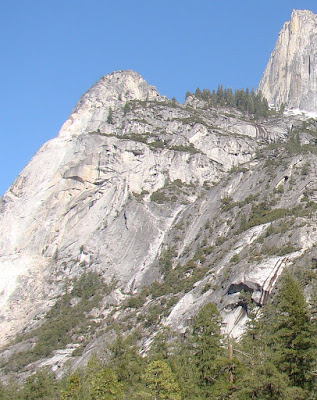 For a first look at the latest rock fall in Yosemite National Park, I offer two nearly identical perspectives of Ahwiyah Point: I didn't predict the rock fall! I was able to crop a shot of Half Dome from a trip in 2004 that included Ahwiyah Point and almost match it from a shot taken today. The release point is on the left side, near the top of the cliff. The scar of the rock fall is visible from many, many points in the valley, including perhaps the most famous at the Wawona Tunnel. The appearance of Yosemite Valley is changed forever, even if in a relatively small way (small from a distance, anyway; it is greatly changed from up close)!

Details are starting to emerge about the event, including seismic information. The rock mass fell some 1,800 feet, and more or less exploded on impact, causing an airblast that spread pulverized granite dust throughout the area. The rocks and blast knocked down hundreds of trees, according to a preliminary note from the park geologist, Greg Stock (from the park's daily report at http://www.nps.gov/yose/parknews/upload/daily.PDF). Thankfully, no one was injured.

Wow! That must have been explosive.
Good job on the comparisons. This is geology in human time.