Northern California woke up this morning to the largest Bay Area earthquake since the 1989 Loma Prieta Earthquake (magnitude 6.9). The magnitude 6.0 quake, now being called the South Napa Earthquake, was located 6 miles (9 km) SSW of the wine country town of Napa at a depth of 6.6 miles (10.7 km). Dozens of people have been injured, three severely, and there has been a lot of structural damage, including a fire that destroyed at least four mobile homes. There are numerous gas leaks and water line breaks as well.

According to the USGS Event Page, the quake occurred along the West Napa Fault, a northwest trending right lateral strike slip fault. The first motion diagram confirms the motion. I've seen in some media reports cracks in pavement  that show broken roads that appear to have right lateral offset, although the break may have been from liquefaction or landsliding.
At magnitude 6.0, this quake is classed as a strong quake, but one of the unfortunate diagrams I'm seeing in media reports is that anything between a 6.0 and a 6.9 like the Loma Prieta quake are being lumped together on a bar graph as "strong". The difference between a 6.0 and 6.9 is profound, and is a reason that we are not hearing about dozens or hundreds of people killed in the event. On the magnitude scale, the amount of energy released increases by about 30 times with each whole number. In other words, a magnitude 7.0 quake is just over 30 times more powerful than a magnitude 6.0, and a magnitude 8.0 is just over 30 times more powerful than a 7.0 (this make an 8.0 around a 1,000 times more powerful than a 6.0).

The USGS is warning that aftershocks are very likely, and there have been dozens already, including a 3.6 magnitude event. It is important to point out that there is a 5-10% chance of an even larger event. It's not likely, obviously, but this could be a foreshock to a larger event. It is a reminder to us folks in California that we do live on active faults, and we have to live with the possibility of quakes reaching 7.5 magnitude, and maybe even magnitude 8.0. If you live in the state, make sure you are prepared with water, first aid supplies, food, and most importantly, an emergency plan. 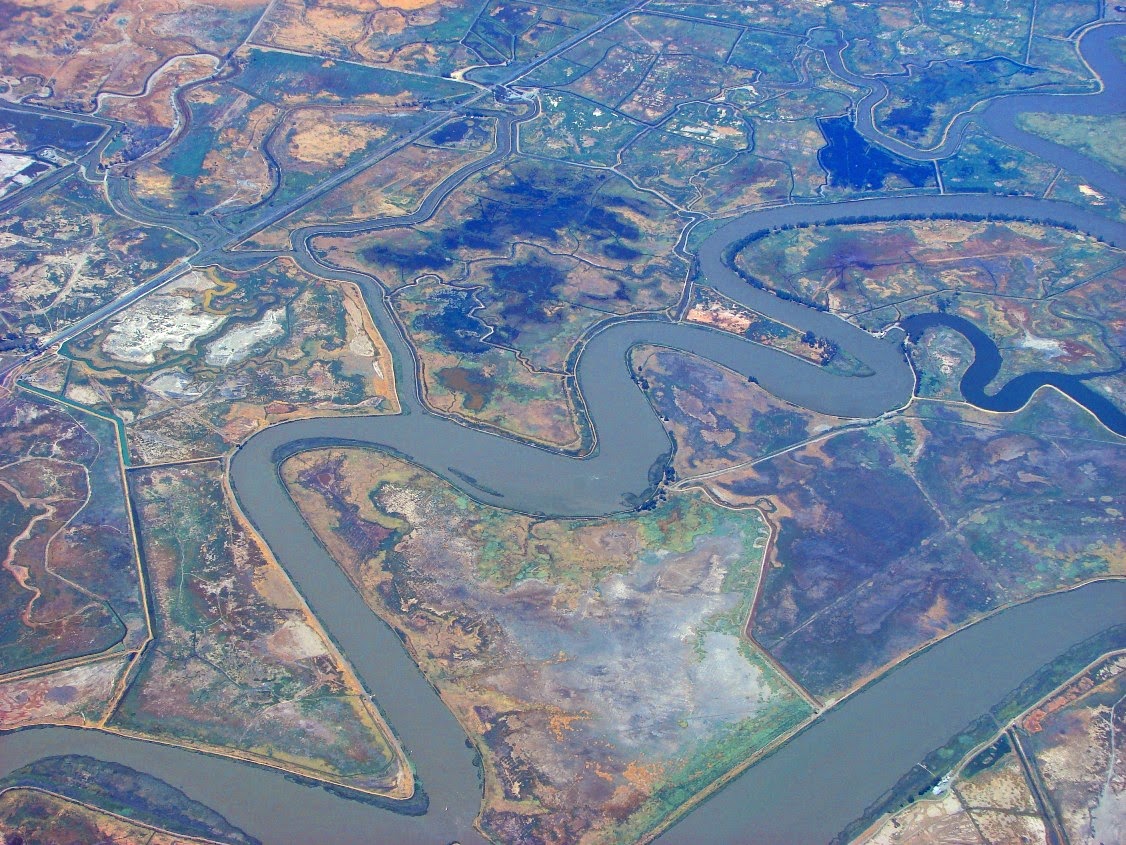 Another issue related to today's quake is in the "near-miss" category. The earthquake took place uncomfortably close to the Sacramento Delta, one of California's most vulnerable environments. It is the region where the Sacramento and San Joaquin rivers converge and flow into San Francisco Bay, forming nearly three dozen islands.  Because of groundwater withdrawals, oxidation of soils and other factors, most of these islands are now below sea level, and are protected from flooding by a series of century-old levees and dikes.

Had water levels been high, such as during spring runoff, the levees would have been saturated with water, and subject to collapse from liquefaction during the quake. The islands could have been inundated, drawing salt water from San Francisco Bay well into the delta environment. The most serious effect would be the fouling of the intakes for the California Water Project that provides water for tens of millions of people in central and southern California.
Posted by Garry Hayes at 11:48 AM