Strangers in a Strange Land: A River Runs Through It, or at least used to

from A Horse with No Name by Dewey Bunnell 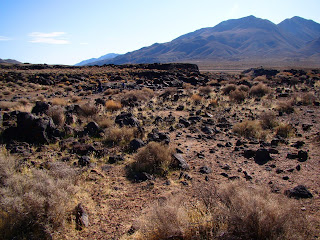 Oh, the songs of our youth. A Horse With No Name by America came out in the olden days of 1972, and was one of those songs that imprinted itself into my junior high psyche in such a way that it can never leave. I think they call it an earworm, known to drive people nuts, but it is a pleasant one for me. It was a bit of an anthem for us backpackers and young desert rats. The lyrics from the song popped into my head as we pulled up to the next stop on our Strangers in Strange Land tour of Death Valley and the surrounding desert region of eastern California.

For first-time visitors, pretty much everything about the desert is strange. For first year geology students, the mystery is deepened by that little bit of extra knowledge they possess that has them observing the rocks and surrounding mountains, trying to understand how this landscape might have developed.

So what was going on here? We had arrived at the eastern foot of the southern Sierra Nevada and parked in the midst of a lava flow from a cinder cone in the Coso Volcanic Field called Red Hill. The age is not precisely known, but it probably is less than 130,000 years old. The lava flow is covered by tan colored eolian (windblown) dust. Up to this point nothing seems particularly strange, but in the picture above, one can see a gap at the edge of the lava flow, a little bit to the right. Why is it there? 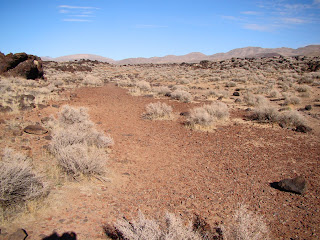 Having walked a quarter mile over rough lava surfaces, it was a bit of a surprise to come across this sage covered flat area that seemed to be composed only of sand and silt, with only a few scattered boulders of the basalt. Something was a bit off about this part of the lava flow.

A look ahead confirmed the odd nature of this stop (below). The lava flow had turned into an intricate labyrinth of deep holes and channels. Even if you barely know anything about lava flows, it is clear that lava doesn't do this sort of thing. This lava has clearly been scoured by a pretty large river, the deep rounded pits being potholes formed by swirling masses of pebbles and gravel. The name of our stop, Fossil Falls, more or less supports the contention that a river once flowed here.

But this is a desert. No rivers are found nearby, and the few streams that flow off the nearby slopes of the Sierra Nevada sink quickly into the gravel-rich alluvial fans long before reaching this site. Could the channel be the result of flash floods? It doesn't seem likely, because the channel upstream has not been cleansed of the easily eroded silt and sand for a very long time. The growth of brush in the old channel suggests stability. 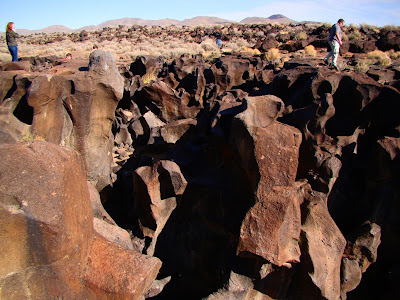 There is a story here...until the 1920s, a large natural lake existed just north of Fossil Falls. It was called Owens Lake, and it was the natural sump for most of the streams and small rivers flowing off the eastern flank of the Sierra Nevada. Although the lake covered an area 8 miles by 12 miles, it was usually no more than 30 feet deep, and in the intense desert heat the water left only by evaporating. There could be no outlet unless the water reached a depth of 200 feet or so. If it spilled over the water would be directed downstream right towards Fossil Falls. The lake is mostly dry today because Los Angeles has diverted the water than once flowed into the basin.

Where did all the water come from? Clearly at some time in the past the climate was cooler and wetter than it is today. The glacial ice ages that affected the region during the last two million years provide a reasonable explanation. Glacial meltwater flowed through Mono Lake and the Owens River, filling up Owens Lake which in turn spilled over into other lake basins farther to the south. These bodies of water are called pluvial lakes. 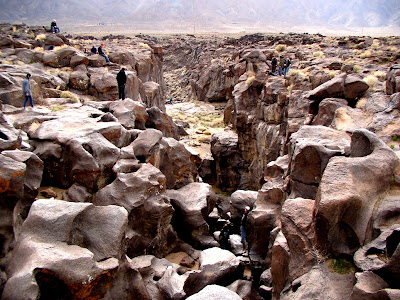 The potholes are still active today, but in a different way. The rare precipitation events will occasionally leave water standing for weeks in some of them. The silt in the bottom contains the desiccated eggs of small delicate fairy shrimp. When they get wet, the shrimp hatch and grow quickly to maturity in a race to produce eggs before the pothole is dry again. I found a few of them warming up in a small pool that still contained water despite the dry year. 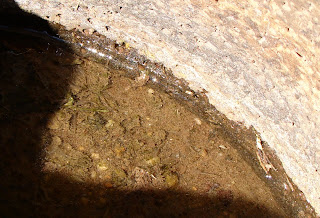 Still, seeing the ghosts of long gone and forgotten rivers is sort of sad. There is no crashing of water cascades, just the quiet breezes (or gales, if a storm is blowing through).  But there was a previous trip...2005 was a very wet year, and we were following on the heels of a major storm. When we reached the falls, I heard something I had never heard before. Water flowing in the ancient gorge! There was no mistaking these chocolate colored trickles with the big ice age rivers, but it was impressive to see anyway. 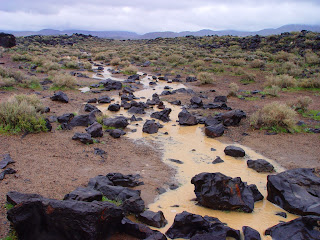 This is the joy of teaching geology! From small inconsistencies in a landscape come grand stories of climate change, glaciers, vast freshwater lakes, and fertile ground for the curiosity and imagination of our students. 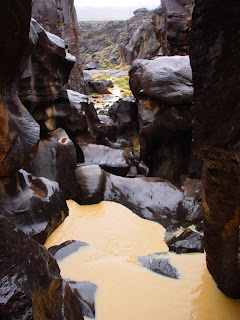 paleomagnetism in rocks that provided unexpected proof of plate tectonics. James Hutton staring at a Roman fortification in Scotland that led to the recognition of geologic time. Nicolas Steno studying "devils tongues" and discovering the biologic origin of fossils.  Geology isn't just an academic discipline; it is an adventure pretty much like no other. 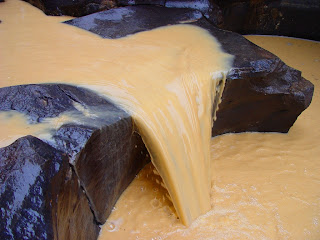 Fossil Falls can be found a few miles south of the Coso Junction Rest Area on Highway 395. Turn east on Cinder Road (just south of Red Hill, the prominent cinder cone next to the highway), and follow the signs on the gravel road about a mile to the recently improved parking area and trailhead (vault toilet and picnic tables available, and a small primitive campsite).
Posted by Garry Hayes at 11:46 PM

This is very cool. I love the ways water flows over/under young lava.

So much fun to study the world around us. And the teaching part can be very gratifying when there's an "Ah ha" moment.

I love that place! My wife and I have been there a few times and I've taken my scouts there over night. Why aren't any pictures of the cinder cone?

Wow, I want to visit that area soon! Thanks for sharing. When I retire I hope to come west and sign up for one of your field trips.