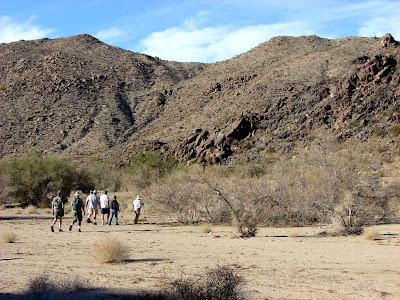 Where can one find the oldest rocks in California? And for that matter, any place west of Utah and Wyoming? Some well-seasoned geological travelers would point to the bottom of the Grand Canyon, where dark metamorphic gness and schist lie exposed below the Great Unconformity. Others might point to the Black Mountains in Death Valley National Park, where similar rocks are exposed along the unique turtleback faults of the deep graben that forms the main axis of the park. These beautiful rocks formed during a collisional event (really two) between 1.65-1.75 billion years ago that formed a huge mountain range that extended across the southern part of the North American continent for an unknown distance westward. At the time, most of the continents of the world were combined into a supercontinent called Rodinia (which existed prior to the better-known Pangea). 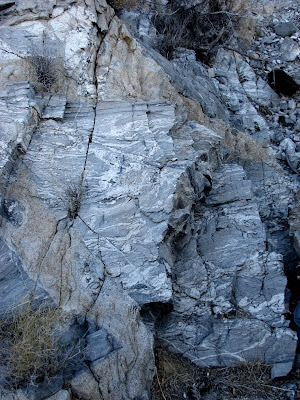 If one takes granite for granted, as I did once at Joshua Tree National Park, one might miss one of the unexpected pleasures of exploring the park. The giant granite boulders in the Wonderland of Rocks may catch most of the attention, but there are secrets in the somewhat bland looking hills in the south and central parts of the park: the oldest rocks in the state! The Pinto gneiss and related rocks in Joshua Tree are related to those seen at Grand Canyon and Death Valley. These are the ancient metamorphic rocks that the granitic magmas invaded. These rocks once may have been sands on a beach some 2 billion years ago, or muds on a sea floor. Some may have been volcanic flows. All have been baked by the molten rock and squeezed into their present shape. 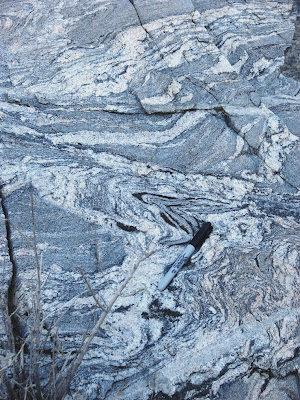 South of Cottonwood Springs at the less-used park entrance near Chiriaco Summit out of Indio, a desert gully along the park road exposes the contact zone between the granite and the gneiss (pronounced 'nice'). The contact is marked by an intrusion breccia, bits and pieces of the metamorphic rocks enveloped in the granitic rock. The isolated chunks of metamorphic rock are called xenoliths ('alien rock'). 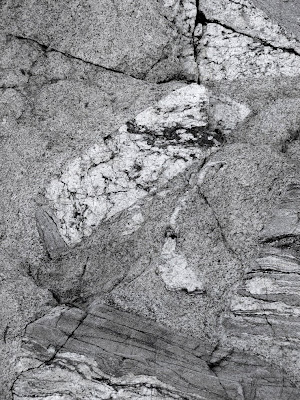 A hike to the Mastodon Mine out of Cottonwood Springs reveals one of the most unique exposures of xenoliths (or enclaves, see comments below) that I have ever come across. The metamorphic rocks are weathering differently than the granitic rock, and end up protruding like chocolate chips in cookie dough! 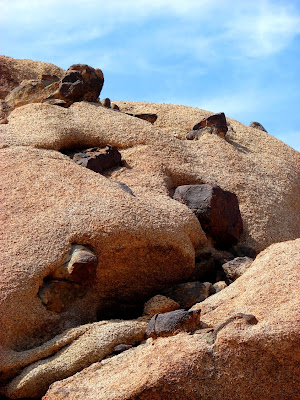 Joshua Tree National Park is a fascinating treasure. The story shall continue....
Posted by Garry Hayes at 4:39 PM

Actually Garry, the bottom picture shows mafic enclaves within the granitic rock. The idea is that a mafic magma intruded into the still liquid felsic magma, but didn't mix. (I have the same picture, taken during the NAGT trip, March, '07).

I took that particular pic on the same trip, and guess I forgot what Dee said about them. I was thinking we were closer to the top of the magma chamber, near the intrusive breccia.

After time spent in the Sierra looking at white/black granite searching for lovely pink potassium feldspar phenocrysts, now you show me a pic of white/black granite as a xenolith. I want to say to my white/black background rock, "ah-ha, you can be caught up in something bigger than yourself, too." Silly, I know...

These rocks once may have been sands on a beach some 2 billion years ago, or muds on a sea floor.

Imagining a landscape in the distant past is what me so interested in Geology.