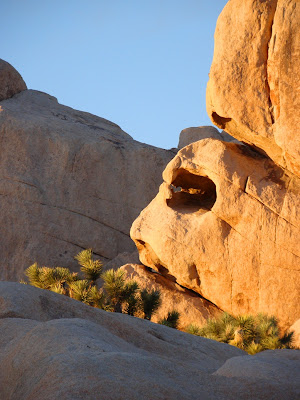 Well, how about that? I was trying to figure out how to squeeze in a bizarre shot from my recent trip to Joshua Tree National Park, and the 34th Accretionary Wedge announcement drops in my mailbox, courtesy of Dana at En Tequila es Verdad:

Geology can be strange. Outrageous. Bizarre. I'm sure you've all run into formations and landscapes and concepts that have left you scratching your head. Maybe they got less weird later. Maybe they stayed strange. But however transient or permanent that weirdness was, it got weird.

So tell us about it. Hit us with the strangest stuff you've got.

I'm late to the party, but what's new? 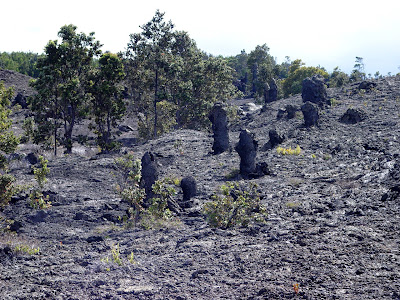 I see a lot of weird stuff in my travels, but what strikes me isn't so much the geology, but our weird response to the geology. Can you look at the rock in the picture at the beginning of the post and not see the face of monster trying to emerge from the ground? The rock results from a random process of weathering and erosion, but see it from the right angle, and the rock becomes of mythical story of beasts and human nightmares and heroes on quests. Perseus fought Medusa, who turned men to stone. Tree molds in Hawaiian lava flows were people turned to stone (above). The volcanic necks of the Four Corners region were the monsters who were vanquished by the Navajo Twins Monster Slayer and Child-Born-of-Water (below). 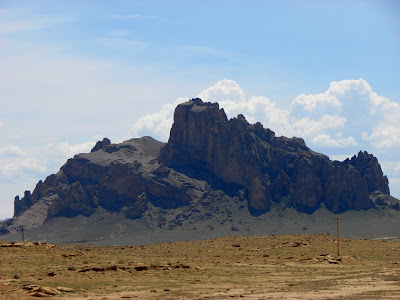 Pareidolia is a psychological phenomenon "involving a vague and random stimulus (often an image or sound) being perceived as significant. Common examples include seeing images of animals or faces in clouds, the man in the moon or the Moon rabbit, and hearing hidden messages on records played in reverse". It's part of being human, the recognition of human faces being one of the most important skills of a newborn baby.

Of course, such things can get out of hand when we start seeing Jesus on tortillas, or faces on Mars that are obviously signs of Martian civilization (I thought it was Elvis myself). Or the Devil smiling in the smoke and ash of the Twin Towers burning (wasn't there enough evil in the hearts of the terrorists?).
Posted by Garry Hayes at 9:02 PM

I'm always in awe of the rock people.

There are certainly a great many of them in your region!

Such a beautiful landscapes... !