What's Eating the Joshua Trees? What's Not Eating Them? 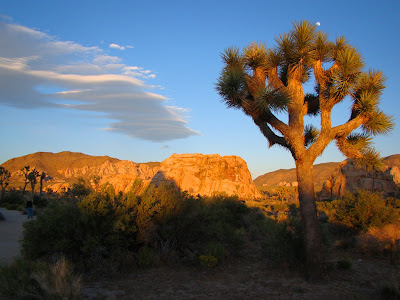 For some reason, the powers-that-be somehow failed to call the incredible geological desert in Southern California "Great Big Granite Boulders National Park". They called it "Joshua Tree National Park" instead. I don't quite understand, but that's the way things go sometimes. Really though, the bizarre little 'trees' have a geological history, and it may be their undoing. 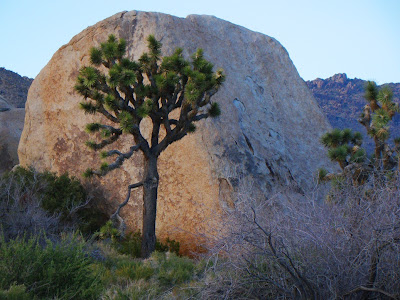 The Joshua Tree is actually a member of the yucca family (Yucca brevifolia, meaning short-leaved yucca), and is so closely associated with the Mohave Desert that the boundaries of the one practically coincide with the other. The "trees" grow to a height of 35-40 feet, and are a centerpiece of the Mojave ecosystem, as many animals shelter within the tree and underneath it. The trees have a symbiotic relationship with the Yucca Moth, in which the moth is pretty much the only organism that pollenizes the flowers, and the larvae of the moth pretty much eat only the seeds of the Joshua Tree. 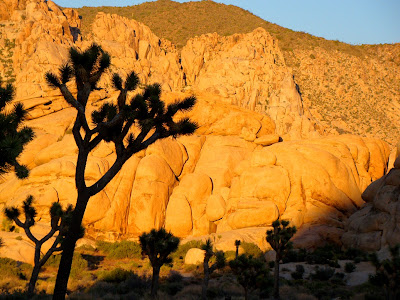 The iconic trees of Joshua Tree National Park are threatened, and as is often the case, we have met the enemy, and he is us. Human generated global warming is raising temperatures in the California Desert, just as it is everywhere else. Joshua Trees are sensitive to such climate change and are no longer propagating in the hotter areas of the park. As the climate warms, more and more trees in the lower edges of the desert will disappear. Normally they would propagate in higher cooler parts of the park, but there is a complication...the problem is a load of crap, or more properly a bunch of dung that is no longer being made. 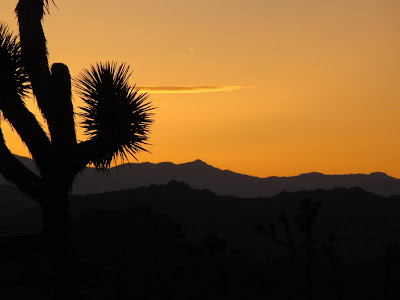 Today, the only animal that transports Joshua Tree seeds is the woodrat, but they don't move much more than a 100-150 feet from the trees. That's not far enough to get the seeds to higher, cooler elevations, and so there is a possibility that within 50-100 years, most of the Joshua Trees will be gone from Joshua Tree National Park, just as the glaciers will be gone from Glacier National Park. There will be places at the north edge of their range where they will be able to survive, but they may have trouble getting there without human assistance.

So how did the trees get around in the past? That's where the dung comes in (or out...). It seems that we have discovered the droppings of giant ground sloths which once lived all across the southwest. It seems odd that we would have examples of their, uh, reprocessed food, but some of them favored dry caves and there are lots of samples to work with. And they contain a lot of Joshua Tree seeds and leaves. It is pretty clear that sloths provided mobility to the seeds of the Joshua Tree, and when they went extinct 12,000-13,000 years ago, the range of the Joshua Tree began to decline during the climate disturbances in subsequent Holocene time. 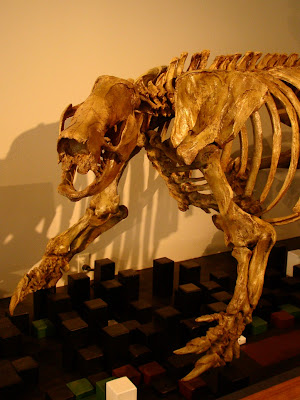 The picture above is a Harlan's Ground Sloth on exhibit at the Fossil Discovery Center near Madera in Central California. Despite the ferocious looking claws, it was probably a rather peaceful creature. I just hate that we cannot witness the wonderful menagerie of creatures that lived in North America just a few thousand years ago, although a few were probably the stuff of human nightmares (a future blog on this will be forthcoming). It occurs to me that instead of having humans simply plant Joshua Trees to insure their survival, we should be following a more logical solution. Doesn't it make more sense to use the DNA of the sloths to reproduce new sloths a la "Jurassic Park", and then release them into the wild to do the work that they were meant to do? How hard could it be, really?

For more info on the Joshua Tree and climate change problem check out this NPR story.
Posted by Garry Hayes at 1:19 PM

Maybe the release of small sloths would work.

Have fun in Yellowstone and say hi to Nina.

Or we could try and do something about global warming.

Nah, I mean, it's not like global warming is affecting any other ecosystem in the world.