Which ones appeared first in your mind? Yosemite? Sequoia? Maybe Death Valley? There are a few others, depending where you live, so Channel Islands, Redwood, or Lassen Volcanic might have been a first response. But who among you thought first of Joshua Tree National Park?

As a native-born and bred Southern California, I am guilty of ignoring the treasure that existed in my backyard. National monuments often get short shrift as part of our nation's national park system, and I am not totally sure why. Many people don't even know the difference, but somehow assume that monuments are somehow a second-tier series of parks, places that are almost as good as national parks, but not quite. Under law, national monuments are the equivalent of national parks, but monuments are declared by Presidents under the terms of the National Antiquities Act, and national parks can only be established by Congress. What this has meant in practice is that Congress has often been reticent about establishing national parks, given the many pressures exerted by special interest groups and lobbyists. Presidents, acting as a representative of all the people in the country, have recognized the national value and significance of these sites, and have declared them to be national monuments to provide protection of the resource.

Often, when a national monument has been in existence for a few years or decades, Congress finally comes around and establishes the monument as a national park. This is true even for some of our most iconic parks; both Grand Canyon and Zion were first declared national monuments before Congress acted in 1919 to make them national parks. There are numerous other examples.

So, why am I talking about national monuments? Joshua Tree is a national park. It turns out, though, that Joshua Tree followed a similar arc of many other park areas around the country. It was established as a national monument by FDR in the 1930s, and still was a monument when I was growing up in SoCal in the 60s and 70s. And I was guilty of thinking of monuments as second-class parks. When I dreamed of traveling, my heart was up in the Sierra Nevada somewhere, and I really didn't get to know Joshua Tree all that well, my trips being mostly confined to a handful of scout camping trips. I remembered a lot of big boulders, joshua trees, and vicious jumping cholla.

Joshua Tree achieved status as a national park in 1994, along with Death Valley, another longtime national monument. And I was by then living elsewhere. These last few years I have been working to rediscover some of these places of my youth that I took for granted. So I made a trip out there last week to check things out and found out that I was also taking the park for granite, too.

What did I learn? The first thing was an eye-popper...having thought the park was made entirely of granitic boulders, I didn't know about the rich variety of other rocks found there, and how they relate to each other. The picture above is one of the starkest examples. Click on it and enjoy a unique panorama; you are looking at a scene from miles within the crust of the earth. This is the roof of a granitic magma chamber, where it was intruding into the surrounding older rocks. Yosemite is famous for its exposures of granitic rock, but you can't see stuff like this in the Sierra. Once I saw this exposure, I knew we were in for an interesting day! More to follow... 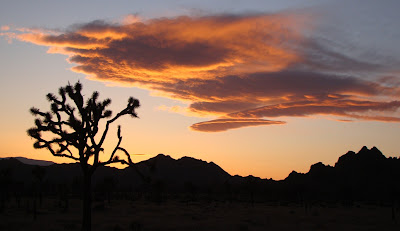 I was probably the only person that thought of Joshua Tree first! I was happy to come home from camping there last weekend, but as soon as we got here, I missed the park dearly. I am eagerly awaiting your next blog post!

Always wanted to spend a night there, but never have. I just hope our national parks and monuments don't go the way of our state parks and recreation areas.