"Are We There Yet?" In Geology, the Journey is the Destination 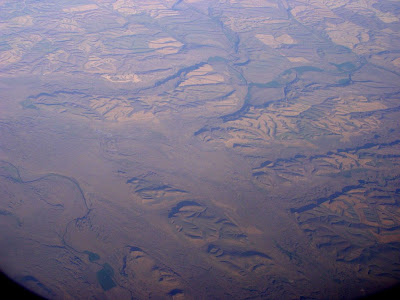 Tolkien's Lord of the Rings, if written the way some people might take a trip to a special place like a national park or recreation area...

A hobbit named Frodo comes into possession of an evil magic ring.
He finds a volcano, he throws the ring in, saving Middle-Earth, and he becomes a hero. The end.

Isn't a little bit missing here? When we ask "are we there yet?" in our travels, we miss out on the value of the journey itself in our explorations. In the same way, the story of a mythological quest like Frodo's (or Luke Skywalker, or Perseus) is a journey, not a destination. The interest, the meaning, the richness of the story is in the insight gained by the hero (and thus the reader) along the way. If it is a mythological story, the hero will succeed or will not, but either way, it the journey that provides the significance to the success or failure of the quest.

Geology is a mythology of the earth. We often use the term "myth" as something that is somehow untrue, but that's not really the case. Myths are stories that inform us of how our world or society or culture came into existence, and in more ancient times, myths represented the best understanding of the world and how it worked. Even today, part of this definition of a myth has an interesting twist: "Myths generally take place in a primordial age, when the world had not yet achieved its current form, and explain how the world gained its current form...". Doesn't that sound a lot like a definition for historical geology? We have different tools than a shaman had in a different age, but if you listen to geologists in the field discussing a geological problem around a campfire, I am sure the cadence and flow of the narrative will somehow be similar to arguments around fires thousands of years ago. The Earth is a mysterious place, and we want to understand how it works...

I was looking at the schedule for our summer field studies trip to the Pacific Northwest and Northern Rocky Mountains this week, and I had a vague worry about the amount of driving we will be doing. We will be covering a lot of ground, but almost immediately realized how important the journey itself will be. In one stretch of our trip, we will explore the landscape that was shaped by the Spokane floods during the Ice Ages. If you are not familiar with this incredible story, it goes like this:

During the ice ages, a glacier blocked a major river drainage, forming a vast lake in Montana and Idaho. The unstable ice dam collapsed, sending a cataclysmic flood across Washington.

Well. Look at that capsule description, note the resemblance to the LOTR version above, and you will understand the importance of the journey in geology. On our trip, we will follow the incredible flood in reverse, beginning at the mouth of the Columbia River, where the floodwaters poured into the Pacific Ocean. As we spend three days moving eastward, we will see deep gorges that were carved in hours or days by the rushing torrents. We will see deep caves formed by the swirling waters, and giant ripplemarks thirty feet tall. We will see a landscape in eastern Washington so stripped of sediment and soil that we call it the Channeled Scablands. We'll pass through the valley where the ice dam blocked the rivers and see the wave cut terraces and benches where lakewaters lapped against high mountain ridges. Think of the perspective one gains if while driving (or walking) across this landscape, for hours and hours, realizing that during the floods, this entire landscape was covered by water 300-400 feet deep, moving westward at the speeds similar to the velocity of our vehicles on the highway. The journey is everything in understanding the story of the Earth!

Ironically, it took geologists a long time to accept the story of the Spokane floods. The narrative was put together in the 1920's by a teacher named J Harlan Bretz, who spent years collecting data and making observations across the region. Like shamans in the past, Bretz lacked some of the technology that would have made the story easier to prove (like aerial and satellite photography), but he scrupulously recorded his observations, and eventually his spectacular story moved from being perceived as a fable to being accepted as a firmly grounded geologic model.

I'm looking forward to our journey! The picture above is a view of some of the flood channels in eastern Washington from 35,000 feet.
(this is a re-post of the previous blog entry, which mysteriously disappeared in blogger yesterday)
Posted by Garry Hayes at 12:12 PM

Most excellent post. We're in an age that hungers and thirsts for grand stories, and geologists have the grandest one in the world.