A Landscape as Bizarre as They Come: The Volcanic Tableland of the Eastern Sierra Nevada

There is a bizarre landscape on the far side of the Sierra Nevada between Bishop and Mammoth Lakes. It's not one of stark beauty exactly, it's barren and covered by little more than sagebrush. It's got few roads or trails, primarily because very little of this landscape is of much use to anybody. From above, the surface is riddled with scarps and grabens from numerous faults. This is a broken-up land. It's not...normal.
The surface of this landscape isn't "right" either. There are no dark rich soils here. The underlying rock is pink or white, and so is the weathered soil and debris that covers it. Although the surface has an area of several hundred square miles or more, the underlying rock is remarkably uniform. It is a volcanic rock called rhyolite tuff. And with that name, the explanation for this landscape is revealed: it is the remnant of an ancient disaster beyond imagining. 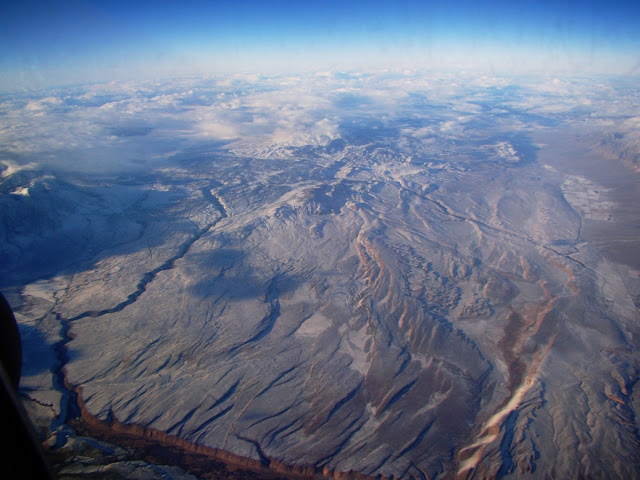 767,000 years ago, an explosion took about 125 cubic miles of pasty magma from the crust and blew it into the atmosphere. The huge void collapsed inwards, forming an oval-shaped depression 20 miles long, 10 miles wide, and a mile or more in depth. The resulting ash spread far and wide, blanketing the western United States. Measureable deposits can be found in Kansas and Nebraska. But most of the ash came straight down. Some of it refilled the caldera, but much of the remainder buried the regional landscape hundreds of feet deep in hot ash. All life would have been extinguished for miles in every direction. 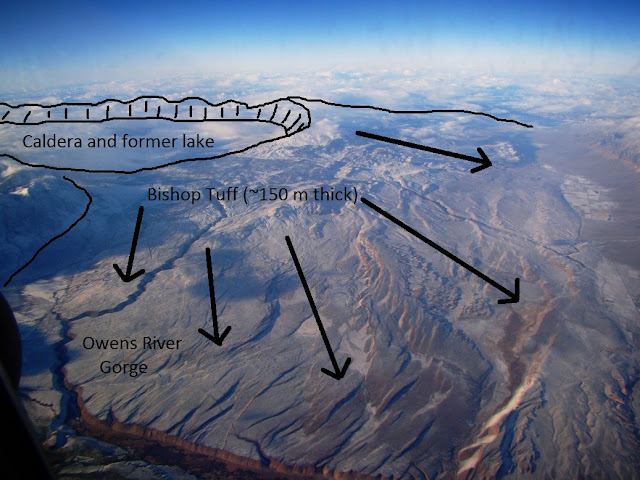 It is difficult to understand the magnitude of such events. From a human perspective, we have nothing to compare it to. An eruption at Tambora in Indonesia in 1815 produced less than a tenth of the ash as Long Valley, and that was enough to cause global cooling with related summer snowfall, crop failures, and famine across the northern hemisphere. The effects of an eruption the size of Long Valley on modern civilization would be appalling. I've heard it said that modern agricultural production has a month-long lead on consumption demand (No, I can't cite a source. It's a factoid I'm sure I heard or read somewhere). Try to imagine a disruption of agricultural production lasting several years. Governmental and societal structures would collapse, and the death toll would be unimaginable. Humans would no doubt survive, but it would be a dystopian landscape as bad as any sci-fi action movie, and maybe worse.

The only good thing that I can think of to say on this possibility is that studies of calderas like Long Valley or Yellowstone suggest that the eruptions will be predictable on a scale of decades or centuries. There would be time to prepare the eruption, or, however unlikely, geo-engineer the caldera to lessen the intensity and effect of the cataclysm. What happens when a singular event completely reshapes a landscape? The eruption of Long Valley completely disrupted the drainage patterns of the eastern Sierra Nevada and Owens Valley. The land had to start over. Where there had once been river valleys and canyons, there was now a gaping pit miles wide and long. The evidence suggests that for 600,000 years the caldera depression contained a huge lake similar in plan if not in scale to Crater Lake. Crater Lake has no outlet, with the lake level determined by evaporation and seepage. The Long Valley Lake would have been similar, as no evidence exists for an outlet, at least until around 150,000 years ago.

For 600,000 years sediment washed into the basin, slowly filling it. Finally, along the south rim of the caldera near the present day site of Crowley Lake, the basin spilled over. In just 150,000-160,000 years, the Owens River carved a 400-500 foot deep gorge down the surface of the Volcanic Tableland, laying bare the full extent and history of the climactic eruption of the caldera. The rate averages out to about a foot every 400 years, but the rate was probably higher at the beginning. The small creek that flows through the gorge today is a mere shadow of its former self. The Los Angeles Department of Water and Power has co-opted most of the water, but a court order several years ago mandated that a minimum flow must be maintained. 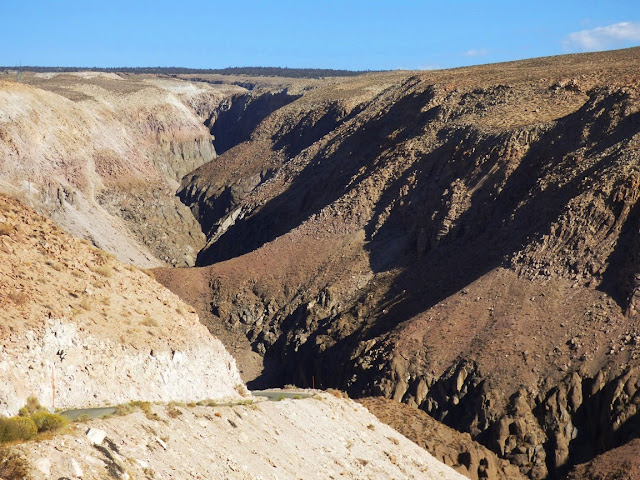 Because the LADWP has utilized the water from the Mono Lake Basin to the north, they have constructed penstocks and pipelines that allow them to produce energy as they transport water down the long slope of the Tablelands. That means access roads, and it is thus easy to visit the gorge, and it is fascinating. 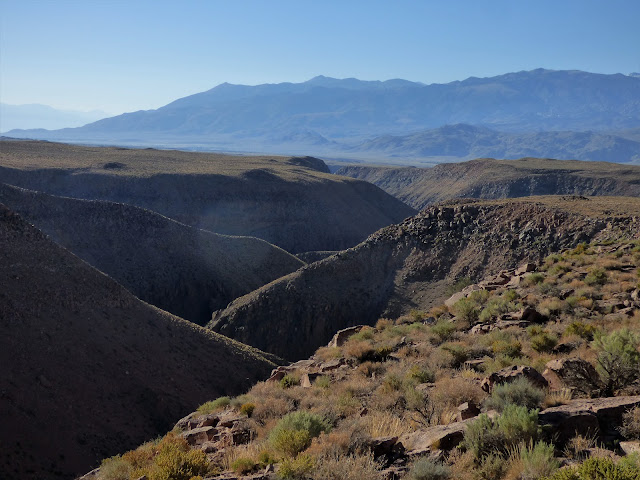 The mounds seen occasionally along the rim are the eroded remnants of fumaroles, where steam would have emanated from the interior of the ashflow, leaving mineral deposits that toughened the rock. The tuff at the rim is relatively soft, but as one walks deeper into the gorge, the rock becomes harder (it tuffons up?). When the hot ash landed, it was hot enough to remelt, forming welded tuff, or ignimbrite. Pieces of pumice caught up in the eruption became flattened and smeared in places. 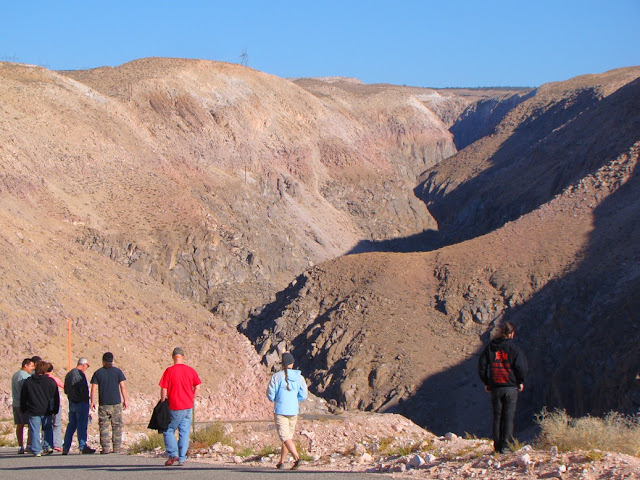 As the rock cooled, it contracted to form columnar joints. Unlike Devils Postpile, a few miles away on the other side of the crest of the Sierra Nevada, these columns are not vertical. Most columnar jointing is not. The intense fracturing of the rock into these columns aided the Owens River in the carving of the gorge, as the crumbling rock could be quarried by the rushing water much more readily than solid rock. 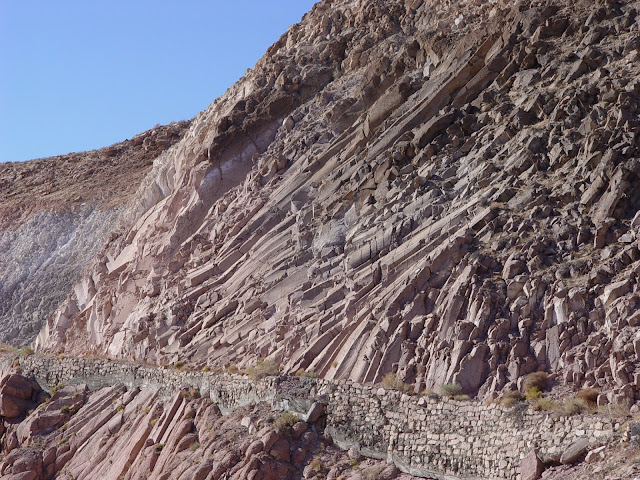 The columns average six sides, but columns with 4, 5, or 7 sides are occasionally seen. 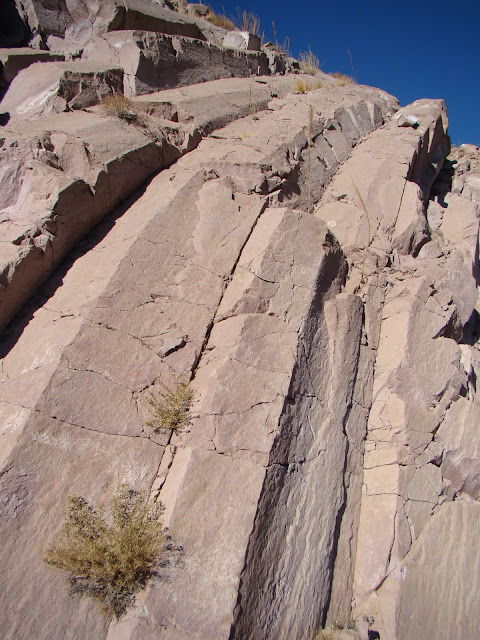 The Volcanic Tableland and the Owens Gorge are otherworldly, but they provide a hint of how quickly landscapes can adjust to new geological conditions. It took 600,000 years to fill a basin 10 by 20 miles with at least 2,000 feet of sediment, and 150,000 years to carve a 400 foot deep gorge. This is fast by geologic standards, but humans, had they been around this region at the time, would not have noticed much change in course of their lifetimes. Just like we aren't noticing the changes now... 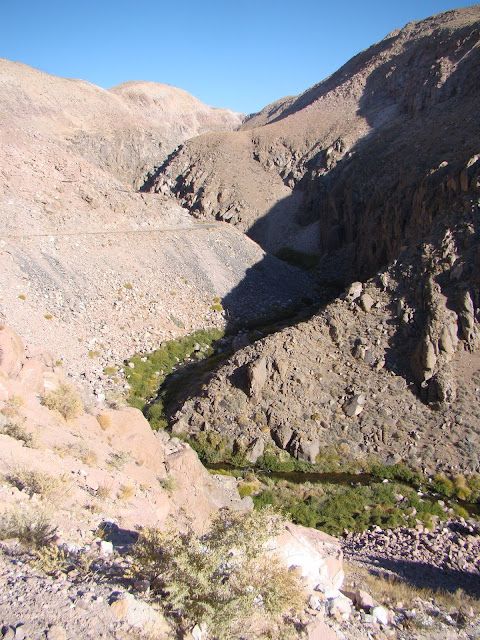 Is there any reason the Owens River Gorge seems to have such a serpentine erosion pattern?

Probably because before it cut down much it acted like a suface stream with meanders but when it started cutting down and those meanders were made permanent. Garry has talked about this in regards to similar structures in the Grand Canyon.