El Capitan Rockfall: Alternate Views, and a Realization That This Wasn't the First TIme

Yosemite Valley changed geologically on September 27 and 28, and as I noted in my previous post, the valley will never look the same again. A series of rock falls resulted in a new scar on the east face of the east wall of the El Capitan cliff that can be seen from many points within the valley, including the iconic Tunnel View.
I finally got to Yosemite Valley on Saturday, and got a few photos from the Tunnel View that I posted yesterday, but I was with students on a bus. Buses aren't allowed to stop just anywhere in the valley, so I was anxious to get back to the valley in my own car, and Mrs. Geotripper was all for visiting the valley, so we went back up there yesterday. The question, of course, was where to go for a good look? I definitely wanted an aerial view, so we headed up Glacier Point Road, the only route that allows for views from the rim of Yosemite Valley. Glacier Point offers views beyond belief, but only of the upper end of the valley. For a view of El Capitan, the "easy" choices are to hike to the top of Sentinel Dome, or to hike to Taft Point. Both hikes are about a mile and are not overly difficult. Sentinel is farther to the east and doesn't provide as good an angle on the cliff face that fell, so I headed out to Taft Point as the sun approached the western horizon. 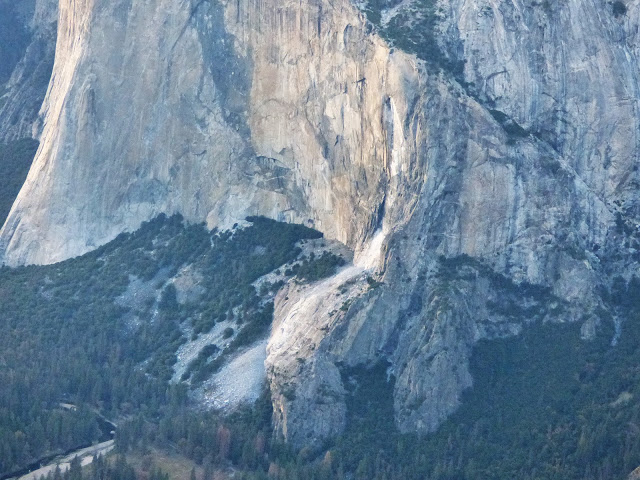 The view is striking. The rocks let loose from well over a thousand feet over the valley floor. According to Greg Stock, geologist for Yosemite National Park, the biggest slab (out of seven total), was 394 feet long, 148 feet wide, and between 8 and 28 feet thick. That's bigger than a football field. It had a volume of 10,250 cubic meters, and weighed about 27,675 metric tons. If these numbers and dimensions seem incredibly exact, there's a reason. As Greg Stock explains, in an informative research paper, the walls have been mapped in three dimensions by a form of radar (lidar), and in the aftermath of the rockfall, the walls at the site of the fall were mapped again. The difference in volume could then be calculated.

I was at Taft Point in 2005, taking pictures of course, and one can compare the appearance of the cliff prior to the event in September.
The rockfall is also apparent from many spots on the valley floor. We headed to El Capitan Bridge, which offers an excellent straight-on view with the Merced River in the foreground. The white scar is unmistakable.
The difference between before and after couldn't be clearer. It's easy to miss the scale on cliffs this grand...remember, the missing slab of rock was bigger than a football field.
Another way to get a sense of scale is to add the 3,000 foot cliff of El Capitan to the scene...

As I was going through my old pictures, I came to realize that slides have come off this particular cliff in the past. I actually witnessed one of them in 2010 when I was lounging on the granite near the top of Sentinel Dome across the valley. When I say "witnessed" I mean I heard the commotion first, took a moment to realize what I was hearing, jumped up, scanned up and down the valley, and finally thought to turn on the camera and take a few pictures of the rising dust plume.
My account of that event can be found here: http://geotripper.blogspot.com/2010/10/rock-fall-near-el-capitan-in-yosemite.html. One can see in the picture below that the 2010 fall was just below the slab of rock that came down in 2017. One can imagine that the stresses on the cliff above were complicated by the event several years earlier. 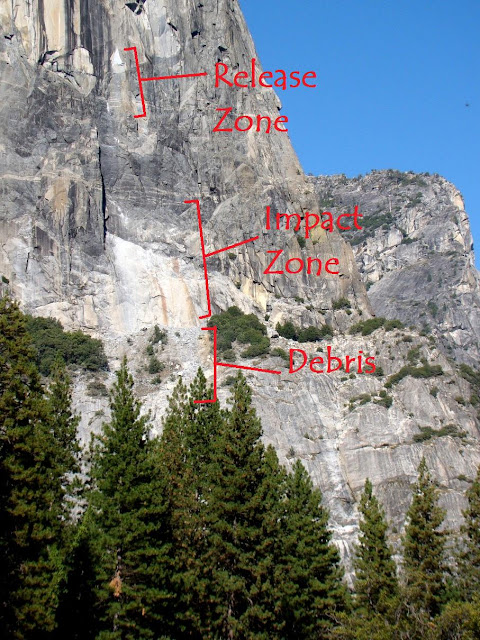 Thanks for the alternate viewpoints. I wonder if the casual park visitor appreciates the risks of random rockfalls. I've hiked to Nevada falls and glacier point and recall steep cliffs above the trails. I also appreciate the view of El Capitan from Taft point. Appears more rounded, as I've learned from you that granite can exfoliate in such a pattern.