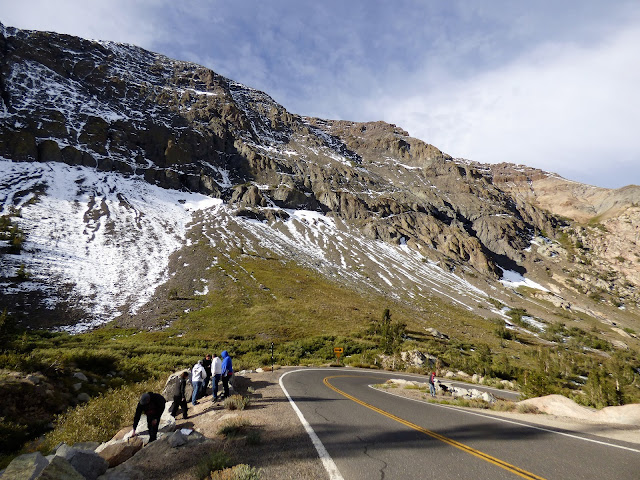 Sonora Pass in the Sierra Nevada is a sort of forgotten step-sister of the more famous Tioga Pass in Yosemite National Park. A paved road, State Highway 108, crosses the crest of the Sierra about forty miles north of Tioga, cresting out at 9,624 feet, but it sees far less traffic. There are, for instance, no national parks, no major ski areas (Dodge Ridge is thirty miles to the west), and no major resorts, and snowdrifts keep the pass closed for much of the year. But Sonora Pass is an incredible place to visit if you ever get a chance, and it makes for a nice loop trip out of the Central Valley, including Tioga on the way back. 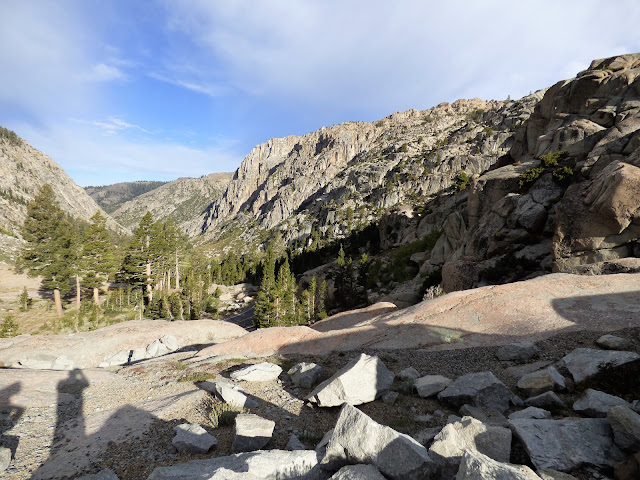 The road is steep and winding towards the top, but the views are extraordinary. We are in the headwaters of the Stanislaus River, and the region was heavily glaciated during the ice ages, making for spectacular alpine scenery. But one thing seems to stand out as one approaches the summit. You can't take this pass for granite. At least not all of it. This bad pun can be understood in two ways: there is volcanic rock at the top of the pass, not granite, and what "granite" there is along the lower reaches isn't actually granite. 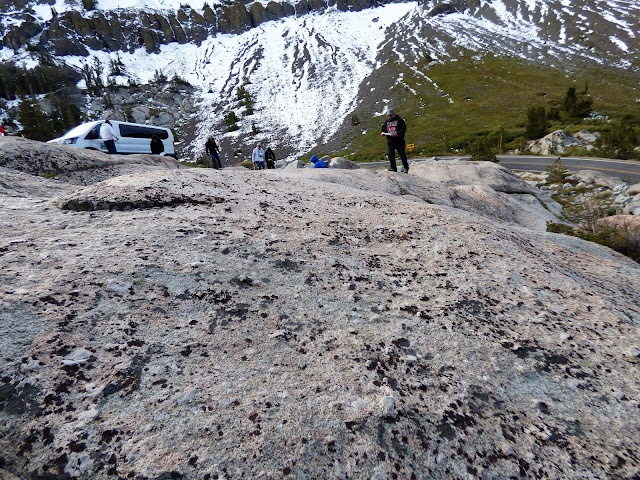 First off, there are lots of fine exposures of granitic rock below the pass, and along the highway for a considerable distance downstream to the west. But it is not technically granite. If one has had a basic earth science course, a person may have learned that there is granite, diorite and gabbro as the plutonic igneous rocks (light, medium, and dark). But if one takes physical geology or an upper division petrology course, one finds there are other rocks intermediate between granite and diorite. The differences come from the proportions of potassium feldspar, plagioclase feldspar, and quartz. As such, true "granite" is actually somewhat rare in the Sierra Nevada, perhaps accounting for 10% of the total. The most common rock is granodiorite, a granite-looking rock rich in plagioclase, but lacking in potassium feldspar. 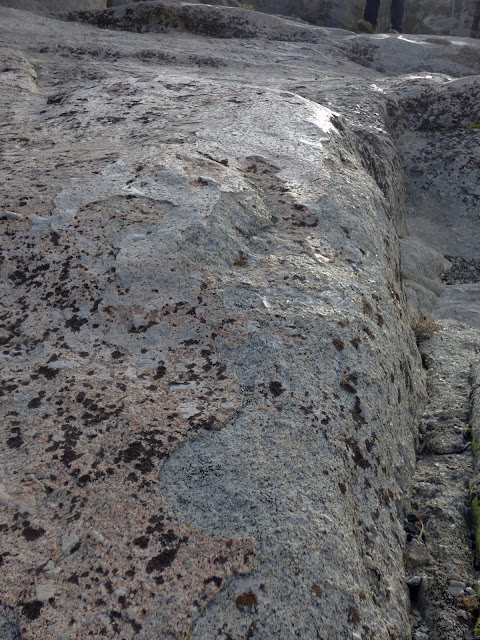 I'm the first to admit that the difference to a layperson may seem trivial, but recognizing these differences allows researchers to draw many conclusions about the circumstances and timing of the intrusions that formed the backbone of the Sierra Nevada. And some of the other
"granitics" are truly beautiful rocks. At Sonora Pass, the common granitic rock is called the granodiorite of Topaz Lake, and it is one of the younger intrusions in the Sierra Nevada, having cooled about 89-93 million years ago. It has massively large crystals of potassium feldspar, 2-3 inches long, embedded in a groundmass (matrix) of smaller crystals of quartz and plagioclase. Such rocks with two distinct grain sizes are described as porphyritic. Glaciers have smoothed off the rock in many places ('glacial polish'), almost providing the effect of a polished countertop. 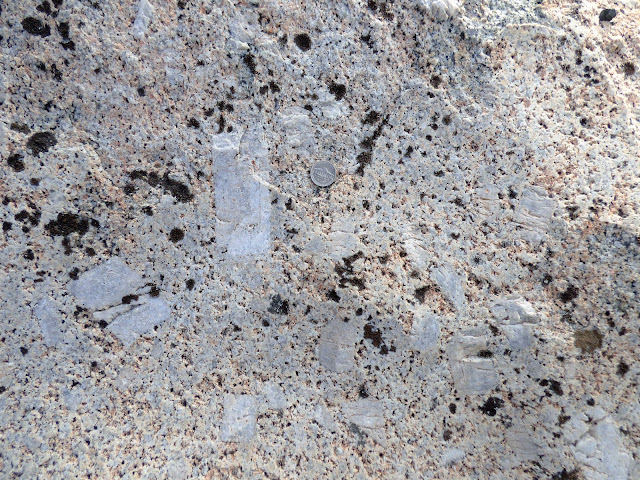 The other way that Sonora Pass cannot be taken for granite is the fact that the rocks at the pass are actually volcanic in nature. Between 11 and 9 million years ago, this area was an extensive volcanic center broadly similar to the one that exists today at Lassen Volcanic National Park, with andesitic stratovolcanoes, lava domes, and a modest caldera complex. 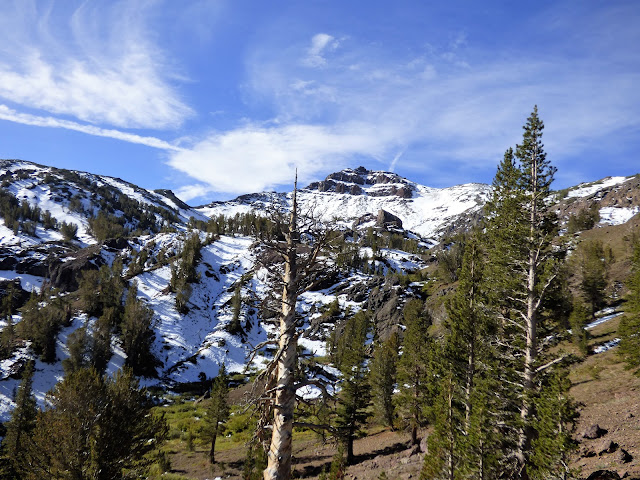 The volcanoes are long extinct, and glacial erosion has greatly modified their original outline. The mountains are striking if for no other reason than that they are different from many of the light-colored peaks of granitic rocks seen elsewhere. In a sense, they almost seem somber and dark. John Muir would no doubt have seen their beauty, but probably wouldn't have been inspired to call them the "Range of Light". 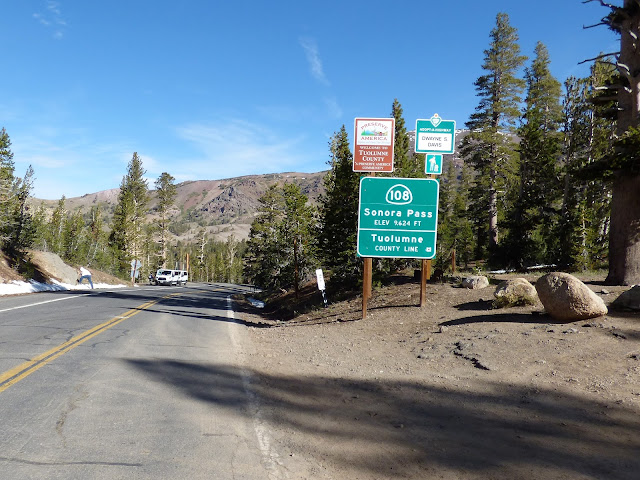 If you ever want to brag about your hiking exploits, but just don't have the energy, you can go to Sonora Pass, and wander a few yards up the trail that crosses the pass going north and south, perpendicular to the highway. That way, when people ask what you did last summer, you can truthfully say something like "I spent a bit of time on the Pacific Crest Trail"! 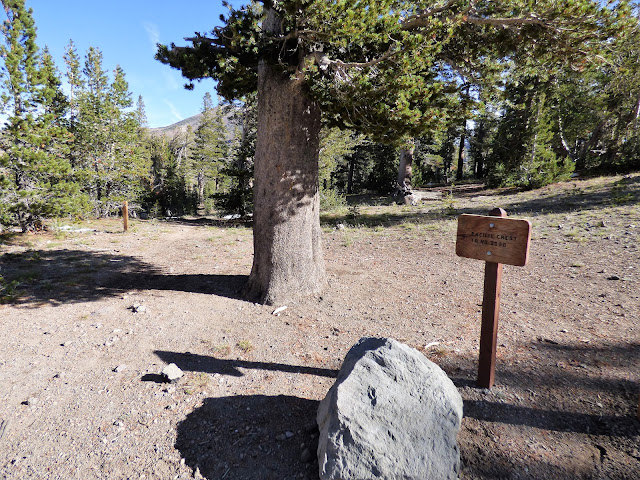 If you long to spend time in the Sierra Nevada, and just can't fathom the thought of fighting the crowds at Yosemite Valley and other parts of the national park, give Sonora Pass a look. I'm pretty sure you won't be disappointed. If you need a guide, my colleague Noah Hughes and I edited a field trip guide for the region for a meeting of the National Association of Geoscience Teachers in 2012, and the book we published is for sale (details are here; all proceeds support the scholarship program of the NAGT-Far Western Section).
Posted by Garry Hayes at 9:11 PM

Garry, I look forward to your posts as a prisoner in solitary confinement looks to sunlight. I work in a windowless building and spent my youthful summers hiking the Sierra with my boy scout troop (hopefully young women in the organization will experience the same soon). Your excellent photographs are an annotated portal to the majesty I witnessed as a young man. I stare at Google maps photos from the Sierra's but they don't include an interesting geology lesson like your blog. Thank you!