Seismic Records from the Nevada Earthquake Swarm, as Recorded at Modesto Junior College 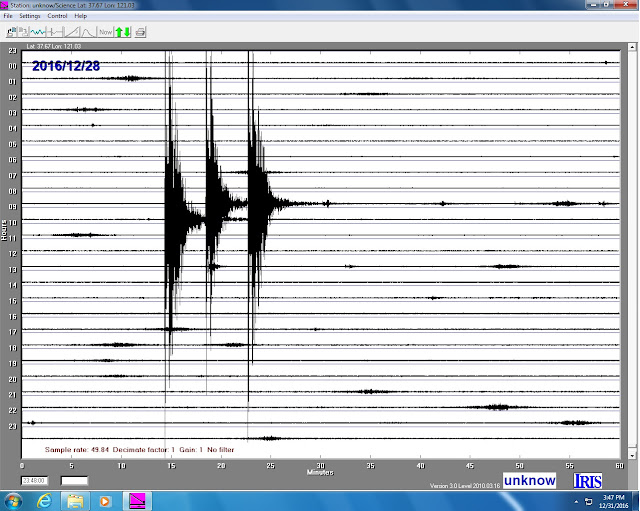 My Twitter feed and text messages went crazy the other night, early in the morning of December 28. For the first time in a number of years, an earthquake was felt widely in the Modesto area as a series of magnitude 5+ quakes struck an isolated region between Hawthorne, Nevada, and the ghost town of Bodie in eastern California. The first two quakes, both measuring 5.7 on the magnitude scale struck within four minutes of each other. A magnitude 5.5 event followed about an hour later. More than a hundred aftershocks, ranging as high as magnitude 4, have taken place in the last few days.

The quakes caused only minor damage, mainly to older buildings in Bodie, and I have heard no reports of any injuries. But dozens of my students and colleagues felt the quake in areas ranging from Fresno , the Bay Area, and Sacramento. I was far away, in central Oregon, and it took me several days before I could get home and check our seismometer at Modesto Junior College. To my relief, there had been no power outages, and the unit was functioning just fine. It clearly caught the three magnitude 5 events, and one can see the magnitude 4.0 nearly hidden by the waves of the first event. 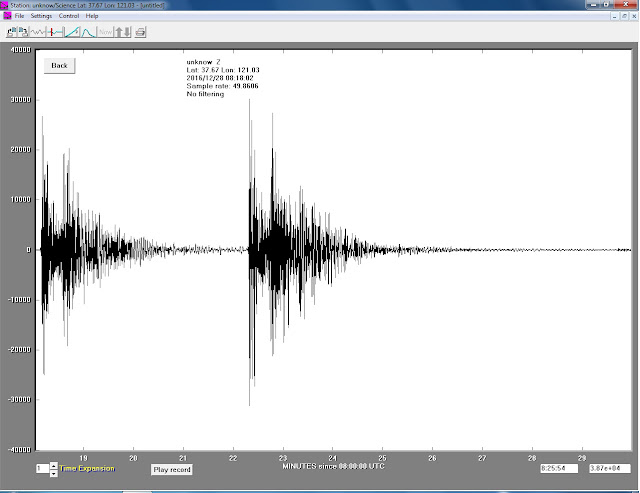 There is nothing fancy about the seismometer; it's really a teaching tool, and not part of any networks. It does a good job of catching major events worldwide, and most 4+ events in the California/Nevada region. There is a display monitor outside my lab (the unit is inside the storage area on the third floor of the Science Community Center), and visitors can get a reaction on the monitor by jumping up and down outside the window. The computer application allows me to isolate any recorded events and analyze them. The records can be stretched out to help distinguish different wave arrivals.

Above is the arrival of the first two events, still somewhat compressed to fit them on one page. It is clear that they were very close in magnitude. The third event, shown below, has been stretched out a bit to emphasize the individual waves (notice the minutes scale across the bottom to compare the two pictures). 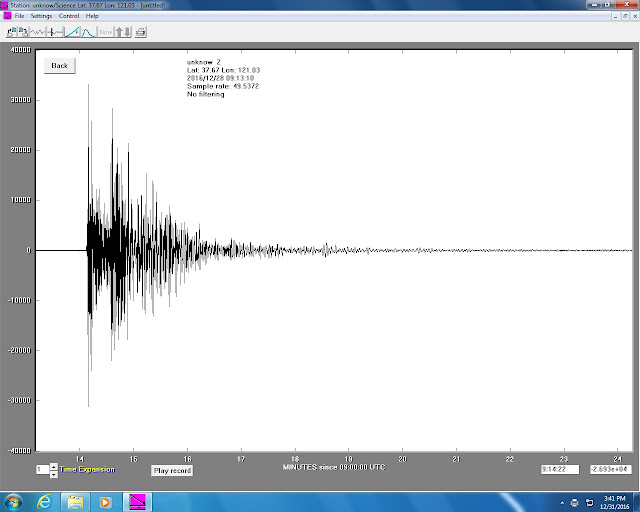 The swarm took place in a complicated region east of the Sierra Nevada where numerous fault lines accommodate the motion of the Sierra Nevada block to the northwest. Strike-slip faults (both left and right lateral) are part of the structural framework. The Sierra Nevada is a solid mass of rock considered by some to be a microplate between the Pacific and North American plates. The area of the swarm is part of the broken up crust that formed in the wake of the northwest movement of the Sierra block. Swarms have occurred in this area in the past, including one in 2011 (the largest event in that one was a magnitude 4.4). 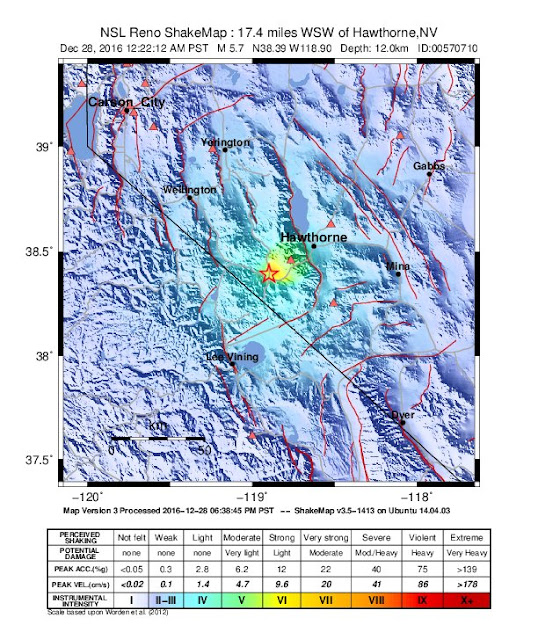 The University of Nevada, Reno has lots of information on the swarm at http://www.seismo.unr.edu/
Posted by Garry Hayes at 9:05 PM