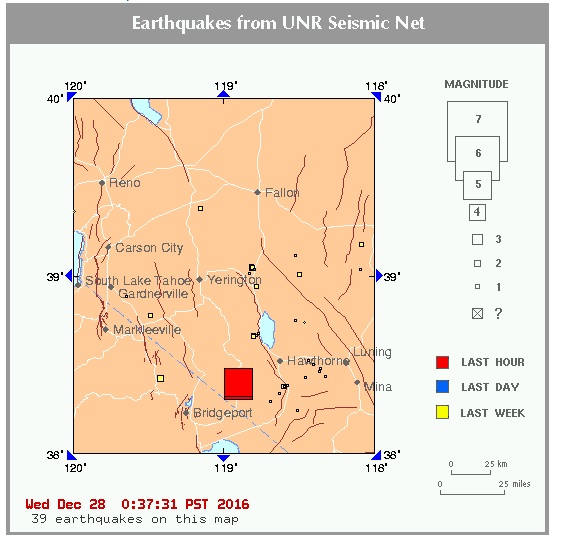 Things are shaking back home, and of course I'm hundreds of miles away. Two moderate earthquakes, both magnitude 5.7, struck in the Basin and Range province east of the Sierra Nevada, north of the ghost town of Bodie, CA, and southwest of Hawthorne NV. I'll not be surprised if the magnitudes are updated upwards, as the quakes were widely felt in the Central Valley of California, well over a hundred miles away. I hope that there won't be much damage, although Hawthorne is close enough that minor structural effects are possible. A lot of people have been shaken awake tonight.

The quakes occurred in a region called the Walker Lane, a region that mimics the San Andreas fault, in that many earthquakes display right lateral motion in an northwest direction (left lateral motion on NE-trending faults is also a possibility). The focus (depth of origin) was about 19-20 kilometers. As I write this, there has been a magnitude 3.6 and 3.5 aftershocks.

I will post the record of the quake as recorded from MJC if the seismometer stayed on during the Christmas break (power outages and that sort of thing can screw things up). I'll update the numbers here in the morning, if they change. Technical details are available at http://scedc.caltech.edu/recent/Maps/119-38.html, http://earthquake.usgs.gov/earthquakes/eventpage/nn00570710#executive  and at http://earthquake.usgs.gov/earthquakes/eventpage/nn00570709#executive.

Here's an interesting interpretation of the tectonics from a Geo Prof up at Humboldt. Here's the link/website. http://earthjay.com/?p=4689