Magnitude 6.5 Earthquake off Northern California (as recorded at MJC) 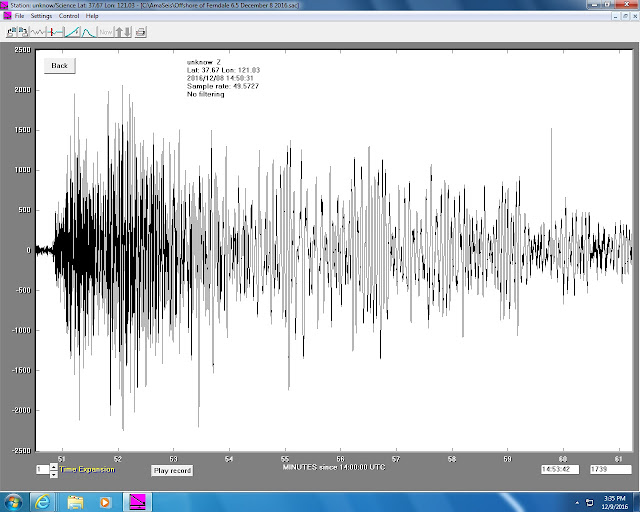 A large earthquake has shaken the ocean floor off the coast of Northern California. It took place about 100 miles west of Cape Mendocino (below) and the town of Ferndale.  The 6.5 magnitude event took place on the oceanward extension of the San Andreas fault roughly halfway between the Gorda Ridge and the south end of the Cascadia Subduction Zone. The first motion diagram for the event is consistent with a right lateral strike-slip fault. The lateral motion of the shaking minimized the chances of producing a tsunami, and none was reported. The quake was felt over a large part of the North Coast, but I expect there was little damage. A hundred miles is a good distance to be away from an epicenter.
We got a good record of the event on our instructional seismometer at Modesto Junior College. I would have posted earlier, but found that although the event was recorded, the monitor had fizzled out and had to be replaced so I could see what I was doing to preserve the seismograph of the event.
Earthquakes are not unusual in this area, and indeed there have been some destructive events over the years, including a 7.2 magnitude event in 1992 that caused some serious damage. It is a complex region, with a divergent plate boundary offshore of a subduction zone, and the transform boundary of the San Andreas fault.

All in all, the best kind of earthquake: big and noisy, but far enough away that no one gets hurt. For more details, check out the details at the USGS: http://earthquake.usgs.gov/earthquakes/eventpage/us20007z6r#executive