Driving to the Center of the Earth in Del Puerto Canyon...Piercing the Ocean Crust

As in the last post, I'm exaggerating a little bit. We're not going to the center of the Earth, we are instead using California's unique geology to explore the mantle, the layer that extends from 20 miles to about 1,800 miles depth, about half way to the center. These rocks have been on a long journey to reach the Earth's surface, and they are not often seen by casual explorers.
In our first post, we had driven through the five mile (8 km) thick sequence of sedimentary rocks laid down on the floor of a relatively shallow ocean (the Great Valley Group). We reached a major fault near the base of the sedimentary rocks and the canyon changed in a major way. The smooth gentle slopes of grass gave way to rocky slopes covered with brush, scrub oak and the occasional cypress tree. The rocks had changed. We had reached the ancient oceanic crust, known here as the Coast Range Ophiolite.

An ophiolite sequence is a unique series of rocks that are usually understood to represent a cross-section of oceanic crust. The top of an ophiolite is composed of pillow lavas, lumpy chunks of basalt that form as molten rock encounters cold ocean water (see some forming in this short video). Those might be some pillow basalts in the picture above, but I've never been able to get close enough to confirm it. It could also be highly jointed volcanic rocks. 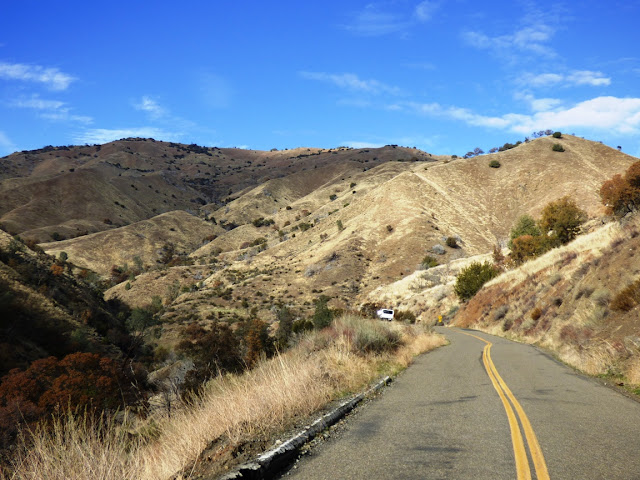 Beneath the pillow basalts, one might expect to find sheet dikes, fractures that have been filled with volcanic rock that had been on the way upwards to the ocean floor. The sheet dikes are not obvious in Del Puerto, although they can be picked out in a couple of places (we didn't stop in the right places on this trip).

There is a prominent dike in the canyon, but it is not actually part of the ophiolite. The rugged ridge is composed almost entirely of quartz. It probably formed millions of years after the others as hot hydrothermal fluids flowed through cracks and fractures. It's been investigated for gold mineralization, but I don't think anyone has found any ores worth mining (not that they wouldn't try; it's still under claim).
Beneath the sheet dikes, one would expect to find the plutons that once fed the eruptions of basalt and other lavas on the seafloor. The magma that remained cooled slowly over thousands of years, forming a coarse-grained rock composed of crystals of amphibole, pyroxene, plagioclase feldspar, and maybe some olivine. The plutons are usually composed of a dark rock called gabbro, but some of the rocks are lighter-colored, a variety called diorite.
The presence of diorite and some silica-rich volcanic rocks in the upper parts of the sequence throws  a wrench in the normal interpretation of ophiolite, especially those that occur in California. Ophiolites that form at oceanic ridges (divergent boundaries) are usually poor in silica (composed almost entirely of basalt and gabbro). The ophiolite in the Coast Ranges of California may have formed in a more complex tectonic setting, in and near an island arc (a chain of volcanic islands like the Aleutian Islands today) associated with an oceanic trench.
In any case, we've penetrated the oceanic crust, a thickness of around three or four miles (6-7 km). These rocks don't often see the light of day, because when you think about it, what does it take to bring the ocean floor and crust to the slopes of a mountain range on land? Geologists have been trying for years to drill a hole through the oceanic crust, unsuccessfully so far, but a new effort has begun this year. Del Puerto Canyon is a place where we can literally walk from the base of the oceanic crust to the underlying mantle.

And that's what we'll do in the next post!