A Netherworld Incompatible with the Existence of Life: The Mantle Exposed at Del Puerto 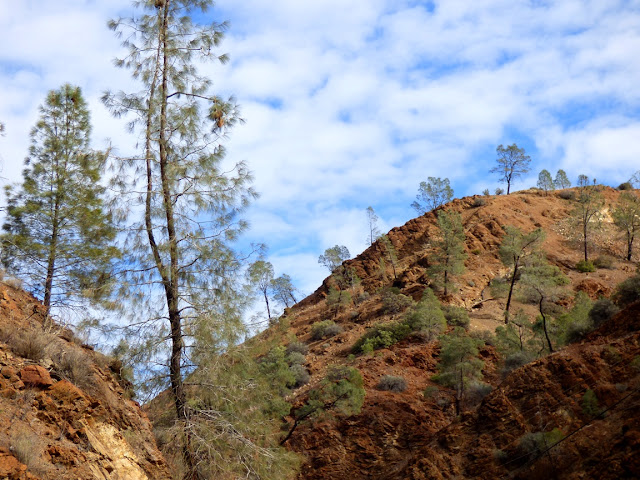 Our journey into the interior of the Earth has reached a remarkable boundary, the base of the oceanic crust. Beyond the crust, underneath the Mohorovičić discontinuity, lies the mantle, a layer that extends halfway to the center of the Earth. We have been driving up Del Puerto Canyon, a scenic route that crosses the Diablo Range in the central part of California's Coast Ranges. The rocks at the headwaters of the canyon have formed a landscape unlike any other. It's a landscape of the underworld, the netherworld.
The netherworld is a place in the mythology and religion many cultures, a dark and hot place deep within the Earth that is the habitation of death. It's no place that a human would ever want to be. And yet, here we were, on a sunny December afternoon. It's not necessarily a place of death, but at the same time the rocks were never really able to support life. They formed in an environment where life was impossible, and life at the surface is ill-adapted to survive in such rocks. 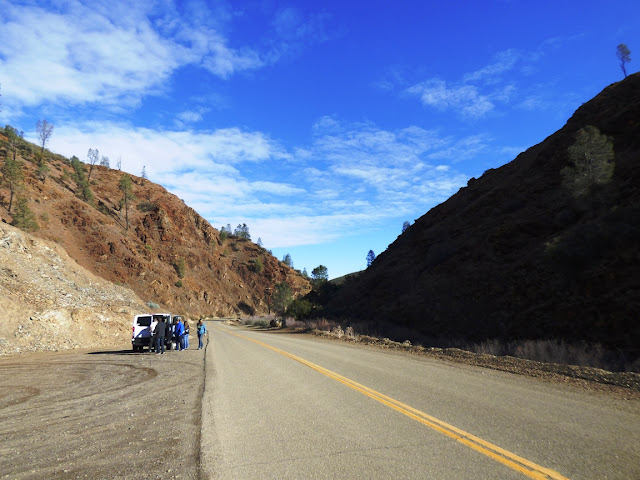 The Earth's mantle is composed of a variety of ultramafic rocks, rocks rich in iron and magnesium and a suite of elements not commonly found in the overlying crust: mercury, chromite, nickel, platinum and cobalt. The rocks found in the upper canyon include varieties of dunite and peridotite, which are olivine-rich rocks. In most places such rocks are quickly altered into serpentine, California's state rock, but in upper Del Puerto Canyon, you can find largely unaltered ultramafic rock. 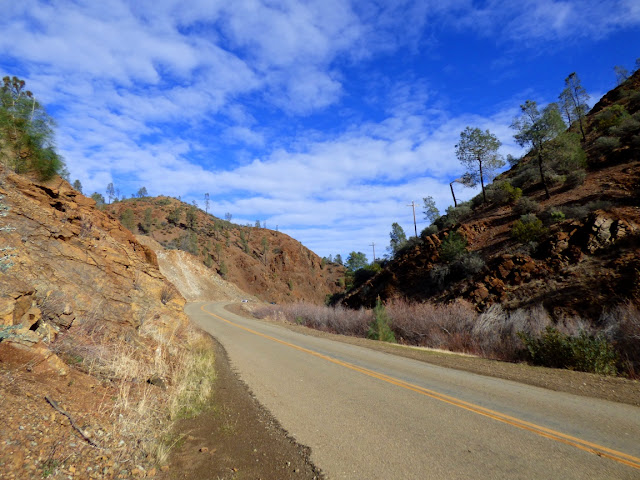 The plant cover is strange, and quite unlike any found on "normal" crustal rocks. Grass is almost nonexistent, and the ubiquitous California oak trees are nowhere to be found. There are too many toxic substances in the soil, and not enough of needed nutrients. The few scattered plants that can survive on such soils include the California endemic Gray Pine and some species of manzanita. A great many wildflowers have adapted to these soils, and the slopes can be quite colorful in wet years. 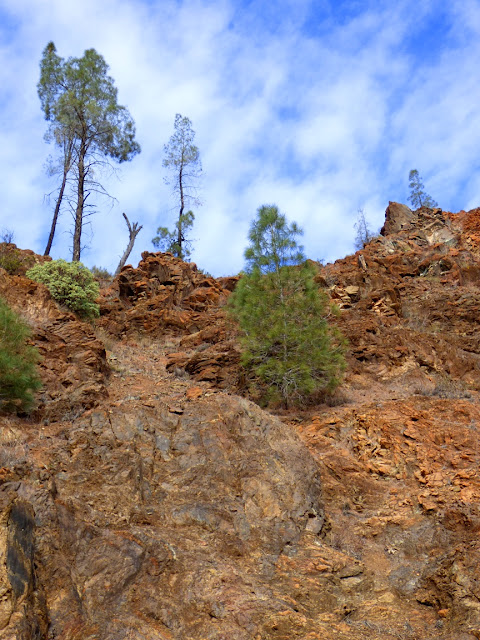 The rocks have yielded economical amounts of mercury, chromite and mercury. Our stop at the head of the canyon was at an old chromite mine. Despite the obvious use to make cars sparkle and shine, chrome has more important uses in making stainless steel and armor. During peaceful times, chrome is cheaper from overseas sources, but in wartime, the ores in the canyon become valuable. They were last mined during World War II. 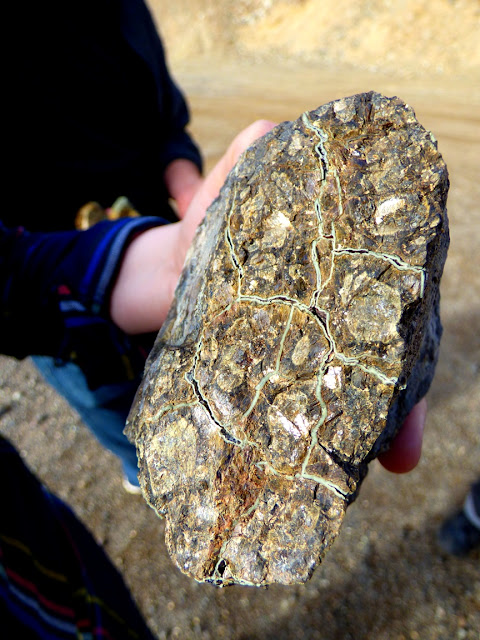 Mercury was sought for use during the Gold Rush as a way to separate gold from the ore. There are extensive deposits in the upper canyon and just beyond the pass at the head of the canyon. Mercury mining was lucrative, but deadly. Miners who absorbed mercury into their nervous system quickly developed symptoms and often died. Mercury continues to poison water and sediments in the Central Valley and San Francisco Bay.
The upper canyon has numerous kinds of rocks to observe. The two pictures above show ultramafic rocks that were in the process of altering to serpentine. The core sections are composed of enstatite pyroxene (which I believe is also known as bronzite when slightly altered like this).
It's not too difficult to find small metallic grains of chromite. It takes a bit more searching to find some relatively unaltered peridotite or dunite. It's a beautiful rock, with the rich green of the olivine, which is also known as the gemstone peridot. That's right, there are outcrops of gemstones in the upper canyon! If you are ever up that way, take a close look at the rocks near mile marker 18.
So, our journey into the interior of the Earth is pretty much done. The rocks of the core are just too deep to visit, even with unobtainium (movie reference! The Core, and Avatar). It's a pleasant way to spend an afternoon, exploring the netherworld in the bright light of day!

If you want to pay a visit to Del Puerto Canyon, it can best be accessed from the town of Patterson in the Central Valley southwest of Modesto. A road (Mines Road) reaches the area from Livermore, and a slow winding road travels over Mt. Hamilton and Lick Observatory from San Jose in the Bay Area. There is a campground and day use area in the upper canyon (Frank Raines Park and Minniear Day Use), but most of the rest of the canyon is private land. Stay on the road!
Posted by Garry Hayes at 4:58 PM

Excellent and informative. You have enriched my visits to Del Puerto!