Dreams of Summer and Southwest Travels: Hole in the Wall, Mojave National Preserve 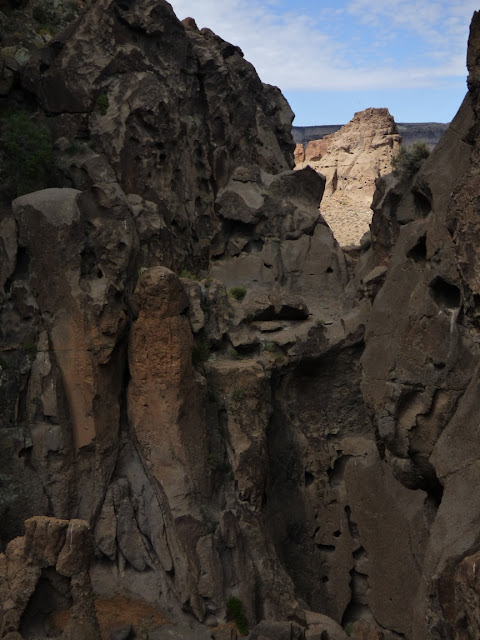 Christmas is over and suddenly the snow and blizzards aren't so fun any more. I find myself dreaming of warmer places and times, including a great journey we took last summer across the southwest with my students. Since my current travels are over until February, I'm going to travel through the archives to check out some marvelous geology along our southwestern tier of states: Arizona, New Mexico, Colorado, Utah, and Nevada. But really, no place is more southwestern than California, where we will start this journey. 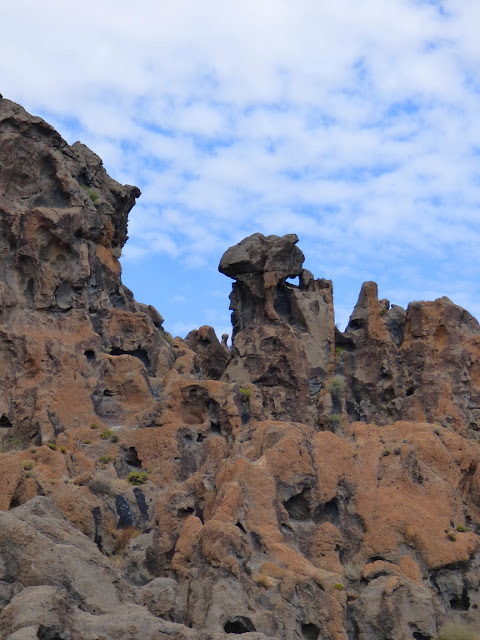 The Mojave National Preserve is one of our nation's newest parks (established in 1994). It was carved out from Bureau of Land Management lands in the eastern Mojave Desert, preserving one of the most awesome sand dune complexes in the country, the Kelso Dunes, a barren landscape of geologically recent volcanic cinder cones, one of the largest Joshua Tree forests in existence, and some of the highest mountain ranges in the Mojave Desert, with rocks as old as 1.7 billion years old, as ancient as those in the bottom of the Grand Canyon. The preserve also encompasses a California State Recreation Area, the Providence Mountains, and Mitchell Caverns, a unique limestone cave system. The caverns were closed during the recession, and then severely vandalized, but there are hopes that they will reopen in 2016 (see this Facebook page for updates). 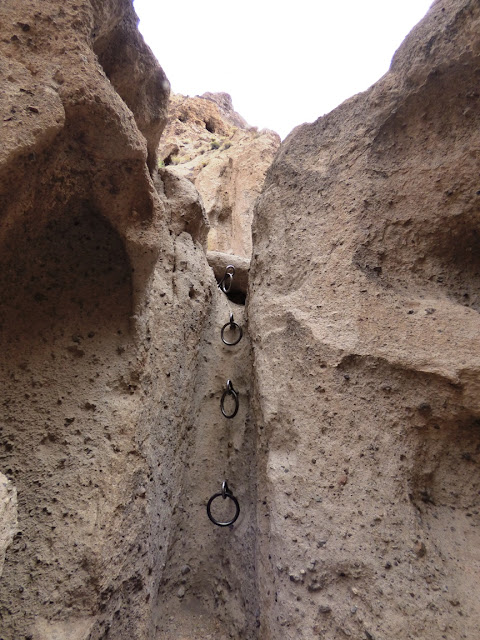 One of the most interesting corners of the park is called Hole in the Wall, along with Banshee Canyon. We stayed at the nearby campground our first night on the road. It is a wonderfully isolated spot, 25 miles off the main highway, and even farther from developments of any kind. It has some of the darkest night skies I've ever seen, and it is serenely quiet (except for crickets and coyote yowls). 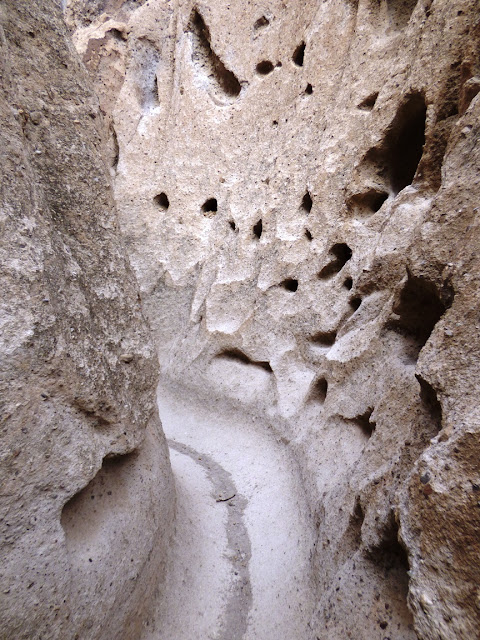 The region is quite unlike other parts of the Mojave. Instead of deeply eroded mountain ranges and wide flat valleys, the area around Hole in the Wall is composed of mesas and plateaus that seem to share more in common with the Colorado Plateau province just to the east. But these mesas aren't like Arizona's either. They are composed not of sedimentary layers, but of volcanic tuff, rock derived from unimaginably huge volcanic explosions the likes of which modern humans have never experienced. 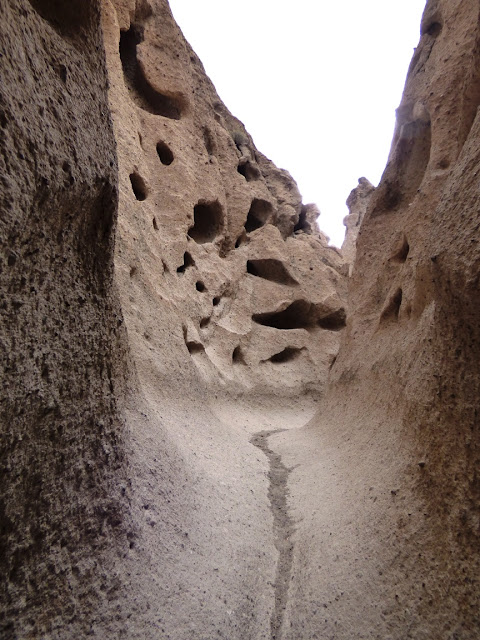 Twenty million years ago, the region was one of low relief, the result of tens of millions of years of erosion and relative stability. But conditions were changing as the crust was stretched and broken up into a series of tilted fault blocks. The release of pressure on the underlying mantle allowed partial melting to take place, and volcanic activity exploded across the region. 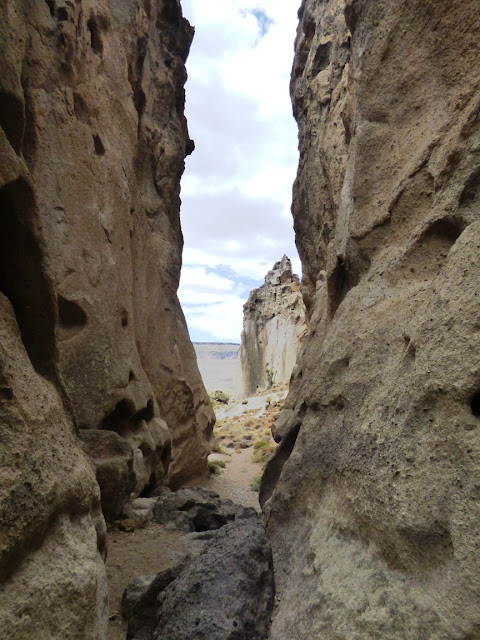 The first eruptions took place about 18.5 million years ago when the Peach Springs tuff coated the entire region from an eruption center near Oatman, Arizona. The eruption involved as much as 150 cubic miles (640 km3) of powdery white ash that was so hot that in many places it welded into solid rock as it landed. 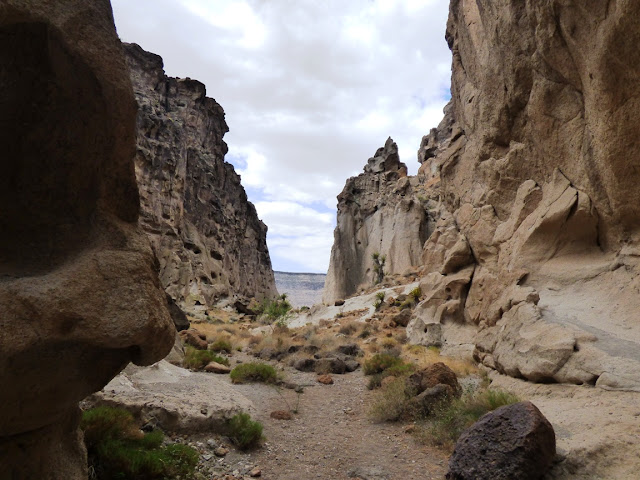 Shortly afterward (in geologic terms, anyway, as it was 700,000 years later), a second caldera developed. It was located even closer, in the adjacent Woods Mountains. The eruptive "crater", actually a collapse pit, was about 5-6 miles across, roughly similar in size to Crater Lake. Once again, all life was obliterated for hundreds of square miles as hot ash blanketed the landscape. The Wild Horse Mesa Tuff makes up most of the rock found at Hole in the Wall. 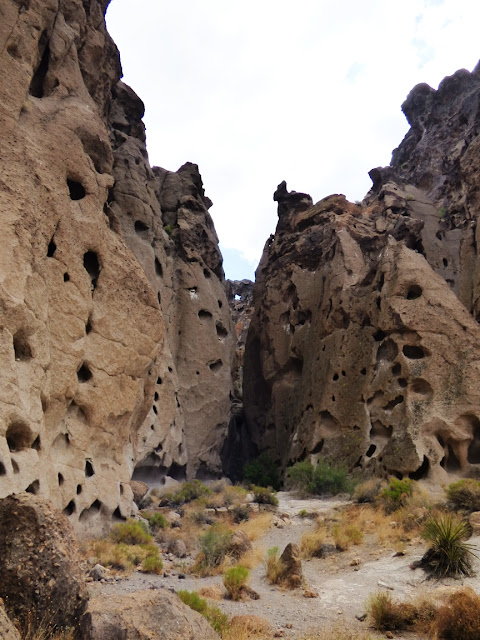 The strange holes that gave Hole in the Wall its name are called tafoni. Small differences in the degree of solidification or cementation cause depressions to form which end up staying wet longer, and the minerals decay into small fragments that can easily wash or blow away. A short trail (1.5 miles) loops around Banshee Mountain and explores the best of the eroded tuff. Starting at the small visitor center, the trail drops through a rugged narrow canyon. There are some drop-offs, but rings have been attached to the canyon wall, making it a lot easier to climb up or down. Once past the narrows, the trail has a gentle gradient, and provides interesting views in all directions. There is a nice collection of petroglyphs on some of the boulders around the south end of the mountain. 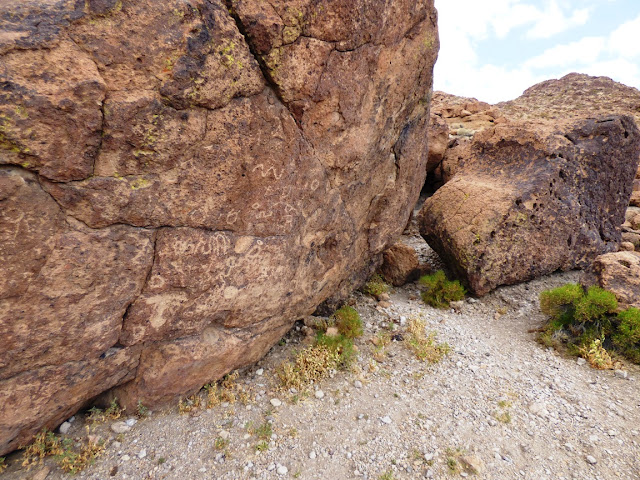 If you want to visit this fascinating corner of the desert, you'll have to search it out. It's not a quick roadside stop, but is instead a place to take a bit of time to explore. The time is well worth it!
Posted by Garry Hayes at 11:46 PM

You went to the Mojave in summer? ("summer dreams"). I stopped there early last May and it was much too hot for me (95-100). I was sad to pass it by; from pre-trip reading, I knew the geology and ecology are fascinating. When is the best time to go, if one can choose?

Winter and spring are usually the best times to visit the desert, of course, but Hole in the Wall is around 4,000-5,000 feet, and therefore somewhat cooler. It was quite comfortable overnight, in the 70s.