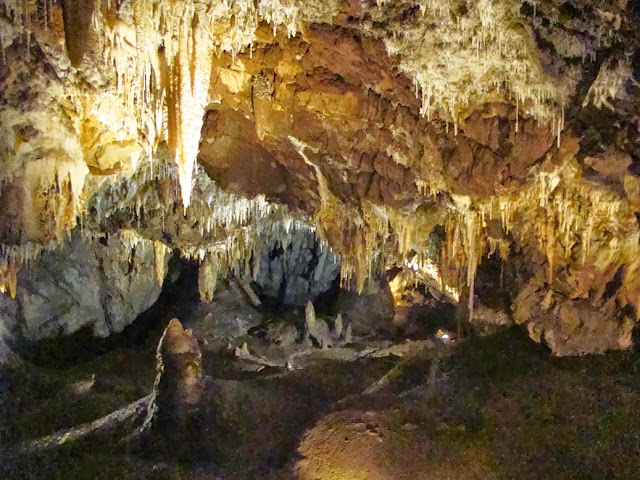 The subject of today's post grew out of several news items from the past few weeks, and a walk underground that I took yesterday.

I'm going to start with a bit of a mental exercise. Imagine a cavern in a place like the Sierra Nevada foothills, a cave that was discovered by miners in the 1850s, and offered up as tourist stop for the next 30 years or so. Think how attitudes about caves differed in those days. Visitors regularly broke off stalactites as souvenirs, and many carved or wrote their names on the walls. Imagine a cave where such activities continued until few speleothems (cave decorations like stalactites and stalagmites) were left, and people lost interest in visiting the site. It fell into disuse and was abandoned, forgotten by all but a few spelunkers, and even they rarely visited.

Skip forward a century or so. Spelunkers explore the cave, and find some indications of deeper passageways, maybe a pile of rubble, or perhaps a cool breeze coming from a small crack in the wall. They start removing the rubble, and realize that a narrow passage may reach into deeper recesses never discovered by the miners and early tourists. Weeks of work and they break through into a new room, a room never before seen by human eyes. A room full of stalactites and other features never broken off or smudged by soot. As a geologist and explorer of the Earth, I've dreamed of doing something like this, but I can't quite fit in the tight passages the way I used to in my youth (not to mention a sense of claustrophobia!). Luckily we can experience something like this discovery in several of California's beautiful caverns, especially Black Chasm, and the subject of today's photography, California Cavern. We visited yesterday as part of a field studies class in the Sierra Nevada foothills. 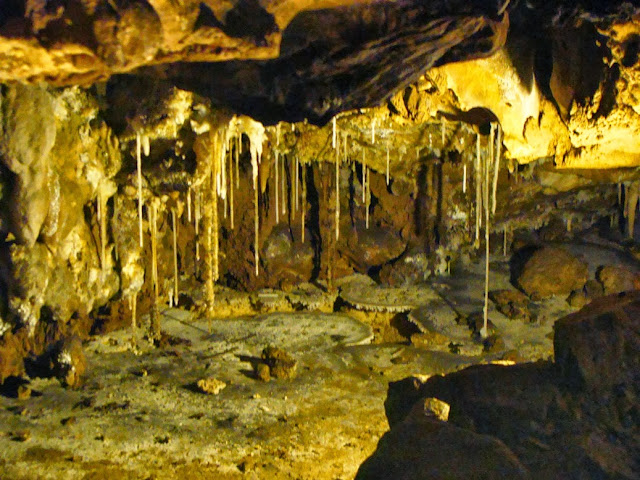 California Cavern is owned and operated privately, and some parts of the cavern system are utilized extensively for recreation, but they've done a good job of protecting the gem of a room that was discovered in the late 1980's. It's called the Jungle Room and it is full of some of the most delicate speleothems I've ever seen. The most extraordinary are the soda straws, thin long stalactites that look so delicate that a single touch could break them off. And they haven't been broken. 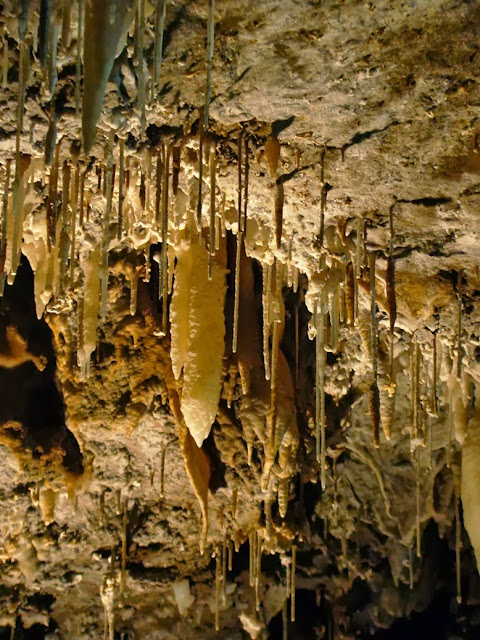 The tour guides spend their time in the first barren looking rooms talking about how the miners and early tourists used to use this room for court, that room for meetings and this other room for preaching or marriage ceremonies. They point out the carvings and other graffiti on the walls, but mostly what I see is destruction of anything within the reach of hands or long sticks. It is sad to think of what was lost in the inkling of time, those few years out of hundreds of thousands that humans entered into these underground openings. 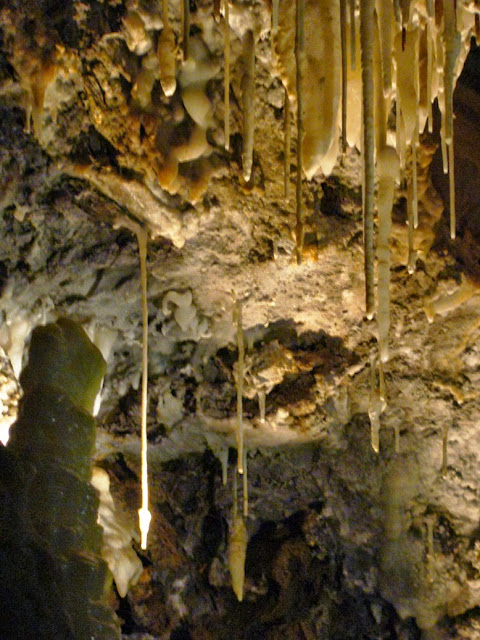 I don't think that the early visitors acted out of maliciousness, just ignorance, but I am seeing a new class of people these days, destructive people who wish only to destroy, for reasons I cannot begin to fathom. I think of the arsonists who would destroy ancient forests, and people who would take advantage of a government shutdown to invade and destroy the beautiful parts of our national parks and monuments.

I wonder if that idiot Representative Randy Neugebauer, who berated a park ranger who was (unhappily) erecting barriers at one of our war memorials, gave even a moment's thought to what could have happened if the park service left the memorials unprotected and unpatrolled. All over the country, terrible people wandered into parks, leaving behind vandalized facilities and obscene messages. 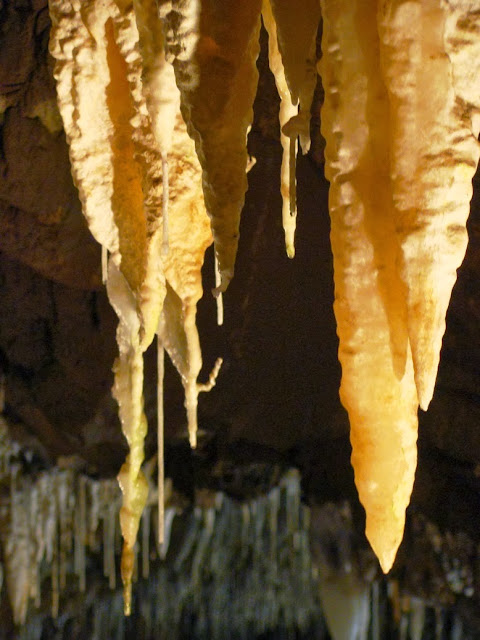 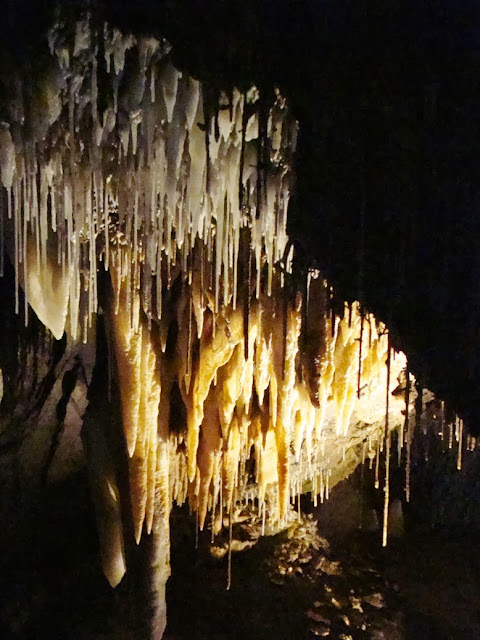 I love seeing perfection. It happens so rarely, and it is always so fragile. That's what I was able to observe yesterday, deep inside the mountainside. Our Earth is fragile too, and we've already done so much damage. 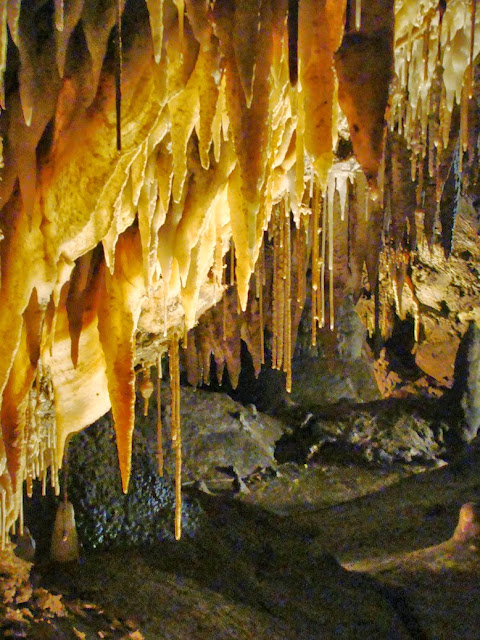 On the way out of the cave after our tour I noticed something that I hadn't seen before. Some of the stalactites were repairing themselves! It was only the littlest change, but some of the soda straws and stalactites were growing again, and I realized that in at least some caves, the features may return, probably long after we humans have become extinct and perhaps replaced by beings with a better sense of beauty. It left me with a little bit of hope. 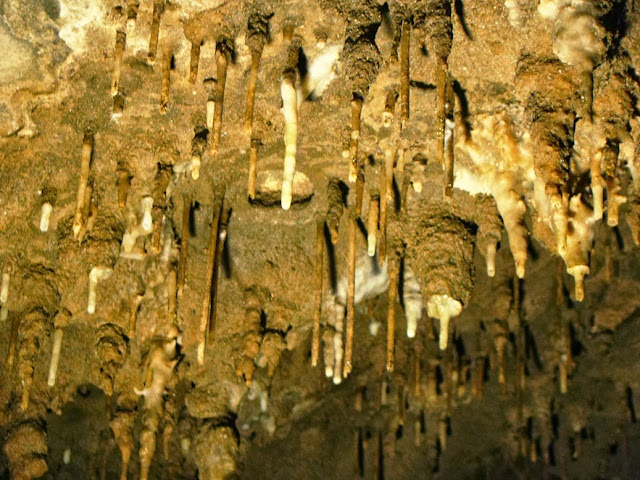 So I end with the morons in Utah's beautiful Goblin Valley, one of my favorite places to visit. Yeah, it's just another damned rock. Who really cares if we push it over? There are hundreds of others. What will it hurt? And besides, they were "saving lives". They are morons, maybe, and deserving of punishment. Because I love places like Goblin Valley, my first impulse is that they ought to go to prison, but on second thought, it might be better if they get a sentence of community service, hopefully teaching others the importance of protecting the wild places instead of destroying them. It's not likely that the message will sink in, but one can hope.

Yes, I cannot see what this human accomplished, except to get accolades from his friends. No thought of his small place in this world. Wish he would volunteer at a Habitat house and use his brawn, rather than moving remarkable stones which have stood for ages, reminding us how small we are in this wonderful universe.