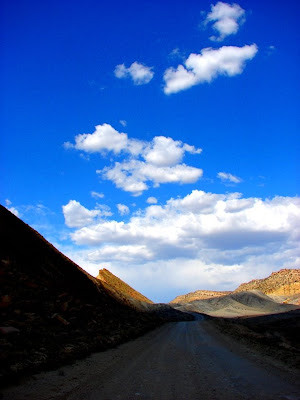 I'm almost embarrassed to come back to this subject, but I have always had an unfortunate propensity to leave big projects unfinished and I would like to overcome it. I was also inspired by the reemergence of the Accretionary Wedge after a brief absence, and some of the final posts in this series will involve the newest theme of the Wedge for June. The subject of my blog is the geologic history of the Colorado Plateau, and it has been a theme of my blogs since last July, although posts have been sporadic of late. Check here to get caught up. My last post concerned the disaster that met the animals of the region at the end of the Mesozoic era. This post will seem similar, but now we are looking forward to the new world that was left to the survivors at the end of the age.
The Colorado Plateau of the early Cenozoic was a new and unique landscape, unlike anything that had passed before. Somewhat like the last post, it brings to mind another poetic passage in the Bible, from Isaiah: "For behold, I create new heavens and a new earth; And the former things will not be remembered or come to mind." The oceans, which for many eons had washed over the region in a series of transgressions and regressions, had receded far to the west and south, and never again would lay down sediments on the Plateau. The crust had been buckled by regional compression which reactivated ancient faults in the deep crust and forced the rocks into a series of structural domes and basins. This event, the Laramide Orogeny, is what raised the Rocky Mountains, and formed the broad outlines of sub-provinces of the Colorado Plateau that we see today. The edge of one of the uplifted domes is seen as the Cockscomb Monocline in Grand Staircase/Escalante National Monument. Farther north, the buckled rocks form the eastern edge of the Kaibab Plateau that is bisected by the Grand Canyon.
Rivers were established across the landscape, and some ended up with nowhere to go, forming vast lakes in what is now Utah, and Wyoming. Volcanism swept across the region as well. But more than anything else, the region was now far above sea level, so in most areas it was eroding, and rocks that had been laid down over the previous 2 billion years were now being stripped away and being carried to the sea. For the geologists of today, it meant that the evidence of the past was disappearing, and in many respects, the Cenozoic Era is one of the most cryptic time periods for us to decipher. Compared to Paleozoic and Mesozoic time, Cenozoic rocks are fairly rare on the Plateau, and thus little evidence remains to tell us what happened, or who was living here.
And that is the other part of the story...the ecosystem of the region, and indeed the entire planet had been decimated by...something. The iconic dinosaurs were gone, and many large denizens of the oceans had disappeared as well. The land-based ecosystems in the earliest part of the Cenozoic were depleted, especially of larger animals. The mammals, who for whatever reason had survived the extinction event, vied with the birds for dominance. The birds almost won! Some species of the avian clan were large flightless predators that would have done their dinosaurian ancestors proud. But by and by, the birds retreated to the environmental niche they were best adapted for, the trees and skies, and mammal-based ecosystems were established in forests and grasslands throughout the world.

Posts coming soon on the Cenozoic's unique national park on the plateau, and the evidence of volcanism in the region. And...where the heck did the Grand Canyon come from?
Posted by Garry Hayes at 5:34 PM

This sounds like part of my geology program at the North Rim. I'm loving it.

A few weeks ago I walked along part of the Cockscombs into Buckskin Gulch, a most awesome slot canyon.