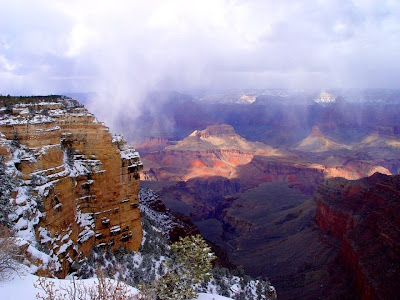 Well, ok, it's one of our more cliched geo-jokes, but some kudos are in order for VIA Magazine, the publication of the American Automobile Association. The cover of their May/June 2009 issue features a photo of the Grand Canyon (not the photo above, that one is mine), and a lead article featuring ten of the best geological parks in the United States! The article, by biologist Chris Woolston, is to be commended for including not only the familiar sites like the Grand Canyon and Yosemite National Parks, but also places like Mono Lake in eastern California, Palouse Falls in Washington, and the badlands of Makoshika State Park in eastern Montana. It's nice when geology gets a bit of credit for the scenery!

Here's some food for thought: What ten parks would best display the geological history of your country? I'll have to think on that one a bit...I live in a very big country.