"Miss"-adventure! So close and yet so far... 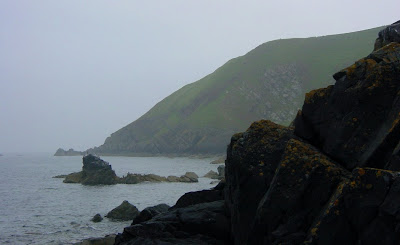 Chris over at Highly Allochthonous asks an interesting question: "Has anyone else driven past cool geological sites without getting to see them?" Call them "Miss-Adventures". It immediately brought up several memories of intense frustration...

The very first international field trip I led was to Scotland in 2001 to see the great geology, but especially to visit some of the famous James Hutton localities. We made special arrangements with the tour company (for a price) to deviate from their usual tour (to St. Andrews to see golf courses), so we could instead head into the southern uplands of Scotland to Siccar Point, site of the famous Hutton/Playfair unconformity* . We committed to the trip 1 1/2 years in advance, having no idea that hoof and mouth disease was about to be detected in the British Isles, including the farms around Siccar Point. So near, so far is so right! Access was impossible. In total frustration, I pulled out the topo maps, and we made our way to a campground about a mile north of Siccar Point. I read the passage from John Playfair to the students, and than I ran as far as I could along the beach cliffs to where I could see the point, but not the relationships (although we could pick up the associated rocks along the coast). The story in pictures is here.

On the same trip, we intended to visit the grave of Hutton at a church in Edinburgh, but as luck would have it, the particular section of the cemetery was locked up because of past abuse by the perpetrators of the the "Ghost Walks" in the town (yeah, yeah I did a ghost walk too, tourist that I was).
John Playfair wrote this famous passage about his visit with James Hutton to Siccar Point:
"What clearer evidence could we have had of the different formation of these rocks, and of the long interval which separated their formation, had we actually seen them emerging from the bosom the deep? We felt ourselves necessarily carried back to the time when the schistus on which we stood was yet at the bottom of the sea, and when the sandstone before us was only beginning to be deposited in the shape of sand or mud, from the waters of a superincumbent ocean. An epocha still more remote presented itself, when even the most ancient of these rocks instead of standing upright in vertical beds, lay in horizontal planes at the bottom of the sea, and was not yet disturbed by that immeasurable force which has burst asunder the solid pavement of the globe. Revolutions still more remote appeared in the distance of this extraordinary perspective. The mind seemed to grow giddy by looking so far into the abyss of time...."
The photo is my best shot of Siccar Point, in the far distance of the scene.
What are your best "miss-adventures"?
Posted by Garry Hayes at 4:23 PM