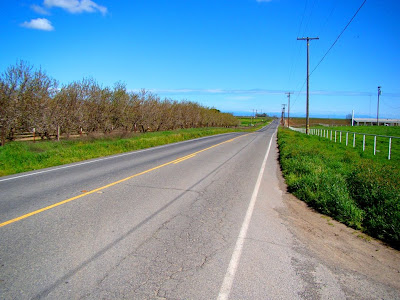 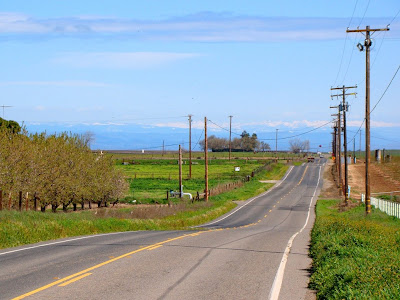 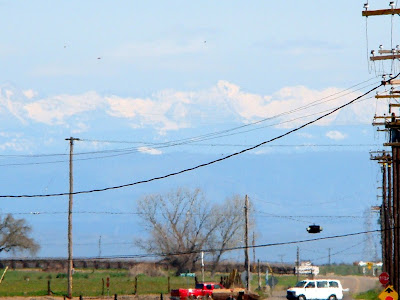 It was birthday week, and in a series of delicate maneuvers and subtly placed hints, I landed a brand new camera (think "subtle" as in Ralphie and the BB Gun in "Christmas Story"). I headed out into the countryside and took a couple of pictures. And had one of those epiphanies that sometimes happens when in wide open spaces. I didn't know my place!
I've always lived in places with mountains nearby. Mountains provide a person with a sense of direction, a sense of "up", a sense of location. In my ancestral homeland of Southern California, the San Gabriel Mountains rise up dramatically from the valley floor, with vertical relief of as much as 8,000 or 9,000 feet in the space of a few miles. They were pushed up by compressional forces along a bend in the San Andreas fault, and according to one analysis I heard of, they are the steepest mountains in the world when computing the average slope. I had no trouble believing this statistic, given my experiences in attempting cross-country travel as a youth. I remember climbing mountains at times by gripping and literally hanging onto manzanita and other shrubs. Oftentimes the only places flat enough to build habitations are on the tops of landslide deposits, or on the lake sediments trapped behind said landslide deposits (Crystal Lake and Mt. Baldy Village are examples).
Later, my life journey took me to Reno, Nevada, where the landscape is dominated by the Sierra Nevada and the barren mountains of the Basin and Range Province. Again, one never had to guess a direction; Grapevine Mountain was north, Mt. Rose was south. One immediately knew about the rain shadow effect, as the ponderosa forests gave way to sage brush slopes along a distinct line.
One more move brought me to Santa Barbara, another place where the landscape is highly directional. The city is squeezed onto a narrow coastal plain in the Transverse Ranges, one of the few mountain systems in the entire United States that has an east-west orientation. Thus, all directions were towards the mountains (north), towards the sea and the Channel Islands (south), towards Ventura and LA (east), and west towards Japan (after Point Conception, anyway).
Eventually I landed and set down roots in the Central Valley of California (or the Great Valley, as we sometimes like to call it). It was during my first visit, the job interview appointment, that I first met up with one of the directional realities. The valley is flat, flat, flat, and the concept of north-south-east-west has almost no meaning. Instead, direction is provided by the railroads, the lifeblood of the local economy. Since the railroads run in a north-west/south-east direction, the cities were originally laid out with the same orientation. Thus, downtown Modesto has a diagonal grid pattern that becomes dominately north-south only in the newer neighborhoods. Giving street directions can be a nightmare! The bicyclists in the recent AmGen race through town must have found it confusing. I certainly did.
When I needed to put on a suit and tie for the interview, I drove what I thought was east to a fast-food place. I was going north. To this day, I cannot walk outside and point north without thinking carefully about it. Inside the classroom, I cannot point correctly east towards the Sierra Nevada. Sometimes it takes two guesses. This from a person who in all his life needed only a compass and a topo map to pinpoint his location faster and better than a GPS unit.
My new camera has a nice zoom function, and I took a picture of one of the typical landscapes found near my small farm town outside Modesto. In the first, one can see the orchards and farmlands, and the barest hint that mountains may lie in the distance. Although the Sierra Nevada is a dramatic and very high mountain range, it rises gently from the west and reaches the crest some 40-50 miles away. With the zoom, in the second picture, the mountains become an obvious presence (this would be "east"). With the highest digital and optical zoom settings, the third picture reveals features of the mountains (through the heat waves). And with that, there was a shock. I didn't know the mountains I was looking at! I used to know the name and elevation of every mountain within sight of my various homes through the years, but I'm gonna need binoculars and a map to figure these peaks out.
I'm not the only one with this problem; an issue arose a few weeks ago about whether Half Dome and the peaks around Yosemite Valley could be seen from the valley floor. They can, but I doubt that one person in a hundred in our valley knows this....

Oh boy do I hear you brother! At least the Great Valley is within easy driving distance of places where you can get your bearings. Kansas is flatter than a pancake and we've got the diagonal railroad issue you mention here too. I generally assign "classroom coordinates" with the cardinal compass points parallel to the walls of the classroom when I begin to discuss strike and dip.

Oh, how I rue the day the Mid-Continent rift failed!

P.S. Happy Birthday! What kind of camera did you get?

Happy birthday! And it looks like a great camera - a DSLR?

Thank you for the BD wishes! I got a Sony DSC H50, sort of the near top of the line Point-and-Shoot types with a nice zoom (15x). I still know next to nothing about the dynamics of photography equipment, so I would be lost with an SLR, I think!

Ron, I want you to know that I am thankful for every day that I live close to a beautiful mountain range only an hour or two away, even if I can't always see it. I never take it for granted.

Happy Belated Birthday, Garry. I remember, very well, the day you were born. We got the call and Mom announced we had a cousin (our first!) named Garry. As for mountains and directional orientation -- I cannot cotton to any mountains that aren't north. We grew up with them to the north, mountains are "up", north is "up" on maps, it is just right! Now I live with the mountains due west, and after seven years, it still seems just wrong! Cuz Carolyn

Looking at your photos you were only a mile or so down the road from where I took my photos of Half Dome. Not bad.

You wrote:
> And with that, there was a shock. I didn't know the mountains I was looking at! I used to know the name and elevation of every mountain within sight of my various homes through the years, but I'm gonna need binoculars and a map to figure these peaks out.

Good luck naming the peaks. I put together this annotated view from Tony Immoos' composite, and it took me many hours, and the expertise of two others and a program using USGS elev/location data.